Back in June 2008 I wrote about imaging radar, and asked whether it was about to 'come of age' as a serious tool for all sorts of applications. Two years on, the answer seems to be a resounding 'Yes!'. It was announced today that developers have handed over the first Multi-Platform Radar Technology Insertion Program (MP-RTIP) radar sensor for integration on the Northrop-Grumman RQ-4 Global Hawk Block 40 unmanned aerial vehicle (UAV). This sensor will be used by NATO for its Alliance Ground Surveillance program.

The remarkable thing about this sensor is not only the level of detail it provides, but the fact that it does so with no optical input whatsoever. In the images you'll see below, there were no cameras or lenses used. The only source for the image data was radar pulses and returns. These can operate through night, fog, cloud, rain . . . you name it, you can see through it. This promises to give forces equipped with this technology a whole new level of ability to monitor and control the battlefield and areas all around it.

As an example, here's the small town of Johannesburg, California, as captured by the MP-RTIP radar sensor aboard the Proteus test aircraft from an altitude of over 40,000 feet. (Click this and other images for a larger view.) 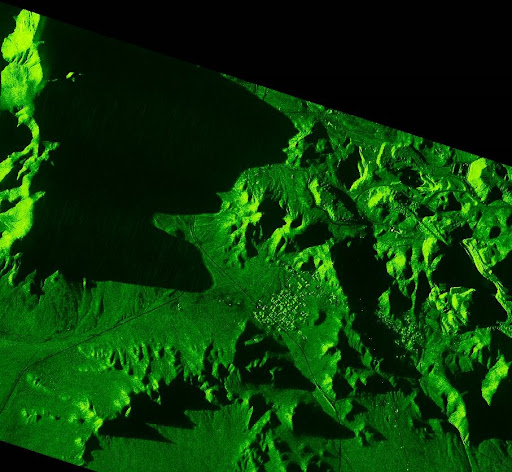 It's worth remembering that this is a relatively small sensor, measuring only 1.5' x 4'. The radar is designed to be scalable, adaptable to sensor sizes as large as 2' x 24' for use aboard aircraft such as an upgraded version of the E-8 Joint STARS or an electronic command and control version of the P-8 Poseidon (or, for that matter, aircraft yet to be developed). Naturally, the larger the sensor, the more power can be used and the greater the detail that can be captured.

The MP-RTIP sensor aboard the Proteus testbed aircraft 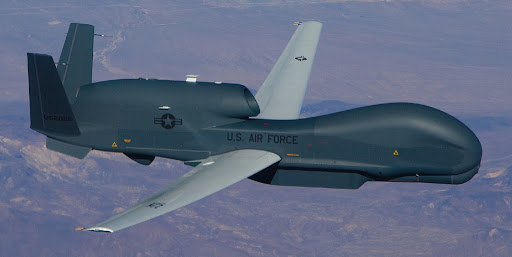 The level of detail that can be obtained using even the small MP-RTIP sensor is classified information, but what's been 'leaked' so far seems to indicate a spectacular level of performance. For example, in the photograph below, it's claimed that USAF interpreters can see the stop signs at the crossroads. I can't, not in the image as provided, even when I click on it to enlarge it; which suggests to me that the image was deliberately degraded in quality before it was released, so as not to give away too much information. 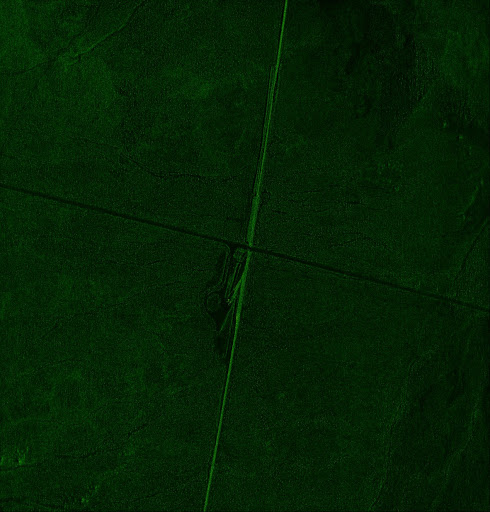 I spoke to a friend who's been involved with NASA's experiments in synthetic aperture radar mapping. (He was one of those working with the shuttle mission that radar-mapped the entire Earth's surface back in the late 1990's, to an average accuracy of 1.5 meters horizontally and vertically.) He told me frankly that the level of technology they'd used back then was already so outdated that it would probably never fly again. Modern antennae and digital signal processing had progressed by 'several generations' since that time.

As an example, he provided these two images of the Okmok volcano in Alaska, taken in November 2001 by NASA's AIRSAR project. This involved synthetic aperture radar aboard a Douglas DC-8 aircraft, flying at an altitude of 8 kilometers over terrain, at a speed of 215 meters per second. (That sort of precision was needed back then, to calibrate the radar returns.) 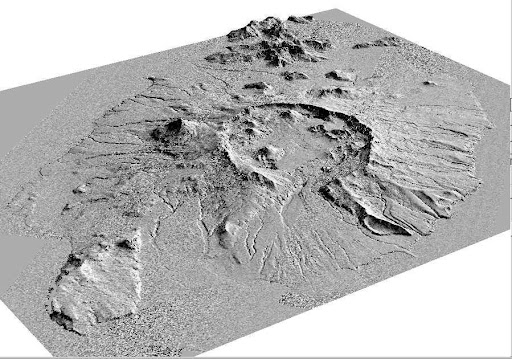 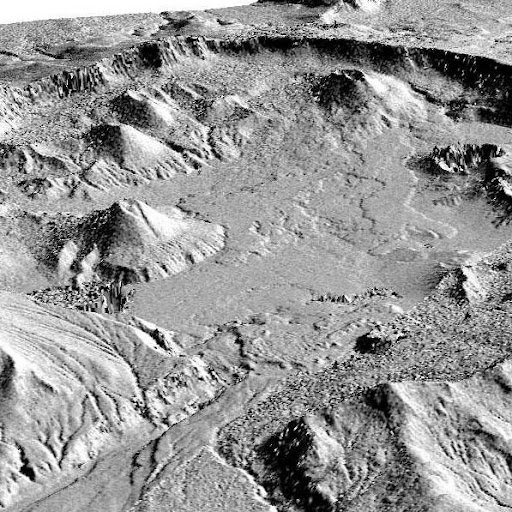 The images above were taken with mid-1990's synthetic aperture radar technology. Compare them to this 2007 image of an extinct volcano in Southern California, taken by the (much smaller) MP-RTIP sensor aboard the Proteus aircraft. (Again, bear in mind that this image has probably been deliberately degraded so as not to give away the maximum precision capability of the instrument.) Click on the image to enlarge it, and get a better idea of the level of detail it provides. 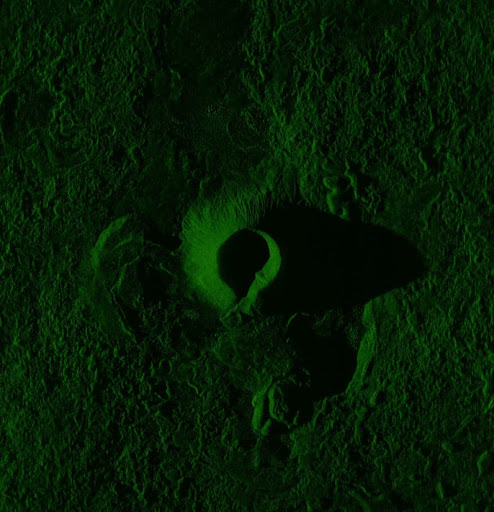 Of course, these images only show the terrain mapping abilities of the sensor. It also has moving target indication capability, where it can monitor targets large and small as they move across the terrain. I asked my friend what would be the approximate performance of such a sensor under battlefield conditions. He smiled, and said, "Think about detecting and monitoring in real time a file of troops walking along a mountainside . . . from fifty miles away and 60,000 feet up!"

That's pretty remarkable by anyone's standards. The MP-RTIP sensor is about to go operational, but it's only the latest in a growing flood of new sensors and computers to assess and evaluate their signals. Just as those 2001 NASA images of Oktok volcano look dated already, so by 2020 we may look back at these MP-RTIP images and smile at how primitive they were! The technology is also being adapted to maritime surveillance. Not only will it track normal shipping; it should be able to detect small targets (such as a Somali pirate crew aboard a fishing dhow, or even a submarine's periscope) from hundreds of miles away.

Of even greater interest are the aircraft that will carry these sensors. For example, the US Army has just awarded Northrop Grumman a contract to build three prototype Long Endurance Multi-Intelligence Vehicle (LEMV) airships. The LEMV will use hybrid airship technology, incorporating both an aerodynamic body to provide some lift and lighter-than-air gases. 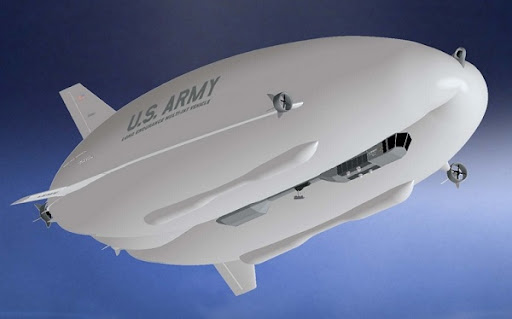 According to Aviation Week's ARES blog:

Operating unmanned, the LEMV is intended to stay on station at 20,000ft for 21 days and providing 16kW of power to a 2,500lb payload of video, radar and sigint sensors.

Such an aircraft, equipped with a larger version of the MP-RTIP sensor and downlinks to intelligence analysts on the ground, might give a whole new meaning to 'battlefield surveillance' in countries like Afghanistan, where enemies have no anti-aircraft weaponry that can threaten it. The first LEMV prototype is to be developed and tested within 18 months, after which it's to be 'dispatched to the Middle East for testing'. You know, by late 2011 it might become a lot more uncomfortable to be a Taliban foot-soldier . . .

How about a synthetic aperture radar system you can build for 250.00 in your garage?

He who wins the battle for information will win the battlefield and the war.

These aren't necessarily the end all be all for every engagement (they don't seem to be all that useful for multi-canopy jungle), but for open terrain like Central Asia, wow. Our troops will be able to monitor just about everything going on around them.

And I'm sure coming soon to a city near you...in a slightly 'downgraded' LEO version.