I think the President has a point about General Motors 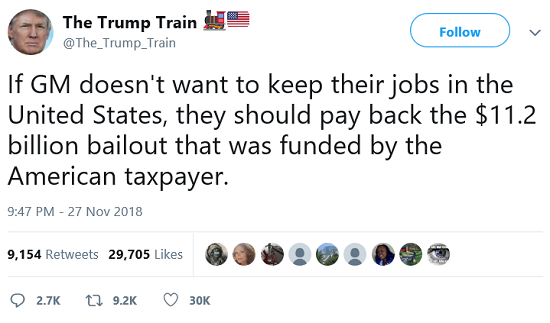 A lot of left-wing and progressive sources are claiming that this is inaccurate, and that GM has repaid all the loans given to it as part of the auto industry bailout.  However, that ignores the reality that the US taxpayer lost almost $11.4 billion on the overall GM bailout package, as Pro Publica confirms.  Click the image to be taken to a full-size view at the organization's Web site.

There are those who claim that the GM bankruptcy deal cost the US taxpayer a lot more than that.  I think they have a point, and so does President Trump.  If GM is going to shed well over 10,000 jobs in the USA, to the detriment of our economy and our society, after receiving bailout funds, loans and other assistance totaling tens of billions of dollars, then I see no reason why the company should not be required to repay that loss to the taxpayer.  If it can't or won't, I think the President should withhold all subsidies, government orders, etc. from GM until such time that the loss has been made up.

GM should have been allowed to go bankrupt, IMHO, rather than rescued from a fate that (in the absence of post-bankruptcy reorganization and shedding corporate deadwood) will inevitably catch up with it again in the future.  Its conduct was so egregious towards its bond-holders and creditors, and to non-union Delphi pensioners, stripping them of their assets and income, that I vowed at the time that I'd never again buy a new GM vehicle.  (I had owned four of them prior to that time.)  I've kept that promise, and see no reason why I should change it.  This most recent development merely confirms to me that, ethically and morally speaking, I made the right decision.

President Trump actually makes a sensible statement on Twitter.
Nobody in their right mind could ever disagree or take issue with a statement like this coming from ANYONE, no matter what their political or ideological standing.
It's a common sense observation altogether, and no matter what one thinks of Trump's past tweets, this time he got it on the money. He really nailed it this time
...now, if he can only maintain this standard and not fall back into the usual "trademark" narcissistic fluff he's become so (in)famous for.

I worked for one of the BIG THREE for a while. The stuff the UAW (U Ain't Workin') pulled was beyond belief.

If they had not been bailed out, they could have survived, smaller, with the unions broken as plants moved to the South. But the UAW and politicians jumped in, which is never a good thing.

President Trump is right. Cut them loose. If they can't be profitable without government money, then let them die, or move away.

I, too, will never own another GM product.

When the government picks the winners, the taxpayers are always the losers.

Mary Barra decided the Cruz and the Volt (Obama said he'd buy one) weren't selling well enough. But now GM has Woke up and is getting into the electirc bike business! There's a wining strategy for the shareholders.

And, not to be caught napping: "GM bought San Francisco-based self-driving car startup Cruise Automation for $1 billion in 2016, helping the company catapult past key competitors in the race to deliver autonomous vehicles."

Now there's a market due to just explode, other than lacking actual vehicles in operation or legal protections for accidents caused by computer foul ups.

I can't believe GM would lay people off right before Christmas. The entire bail out was so politicized on winners and losers. And Ford since did not take bail out money, they were at a competitive disadvantage.

Hit them with that bill at net:90days. Yuuge import duties to be added to all their parts and vehicles not made here. F**k them. Wouldn't buy a GM product after their actions in that bailout.

What can I say? I support President Trump. GM was given extra innings again and again at my expense and I have nothing at all to show for it. They do, all of them. Every single one of them reaped profit at my loss and laughed.

Well put, Peter. I agree 100% with your evaluation and your prescription. Apparently President Trump feels in a similar way. I started calling GM, "government motors" after the Obama era bail out. They need to get their corporate act together or they'll never get my business. Their behavior was odious and the obamanation loved it.

The whole bail-out was a payoff to the UAW for their support in getting Obama elected, combined with the certain knowledge that if he didn't provide a quid pro quo, the UAW would oppose him in the reelection. Obama also rewrote contract law with the bail-out, insuring that supporters didn't receive a haircut on their holdings. A large group of us said that, "that's illegal", not that illegal ever stopped Obama or his activist judges.

A thought... just to put it out there.

Look up, and write to, your local GM dealers. Tell them you are now boycotting GM products, why, and that you will encourage others to do the same.

Be sympathetic; tell them you understand that they had no part in this decision, but that you cannot ethically support a company which was bailed out (!) by America, and is now dissing America.

GM, Chrysler, and a bunch of financial firms SHOULD have been allowed to fail or be bought out in 2008 and 2009. The government stepping in allowed the companies to escape the consequences of their bad decisions, the "Creative Destruction" that helps economies grow.

I think that the only ones happy with the bailout of GM, were the executives of GM, and maybe the Democrats and unions.
The majority of the nation was going through the same hard times as GM, and all the other companies. People who were losing their houses, and filing for bankruptcy, had little sympathy for a huge corporation.
Of course, many of those who lost their homes would not have been in that position, had the Democrats such as Barney Frank and Ted Kennedy forced the government to have Freddie and Fanny allow people who did not have enough money to buy into a home that was simply not affordable for them. So it was no surprise when they could not keep up with the payments.

There are a lot of good comments here, and cannot add much to them, but I will say this. What is the dealio with these idiot Chevy TV commercials with the squealing girlyboys and the like? Who are they appealing to? Is anyone now planning on buying a Chevy as a result of this crap? Chevrolet is SERIOUSLY overestimating the esteem in which JD Power ratings are held by the general car/truck-buying public, for one thing. Is this a direct result of Mary Barra's "leadership" and the wider attempts at feminizing the American public under which we have been suffering for years? WTF?