The entitlement mentality at work - even among refugees


It seems that thousands of refugees, denied access to the fleshpots of Europe's most generous welfare states, are prepared to commit violence to get to them.  Austria's largest newspaper, Kronen Zeitung, reports (original in German, translation courtesy of Google Translate):

The most up-to-date information of the liaison officers on the situation in the Bosnian-Croatian border area at Velika-Kladusa, 224 kilometers from Spielfeld, is located on the desk of the head of department at the Ministry of the Interior. Their analysis: A breakthrough attempt by "at least 20,000 migrants" at this border crossing to Central Europe could be imminent.

"The Croats are really trying to handle this alone. They have also positioned special forces at this transition, "say the analysts of Group III (Migration) at the Interior Ministry in Vienna. But there are developments that are worrying, officials say: "Now others are coming - no more families, and there are hardly any women left. 95 percent of these migrants who want to break through are young men, almost all armed with knives. A border policeman has already been stabbed." 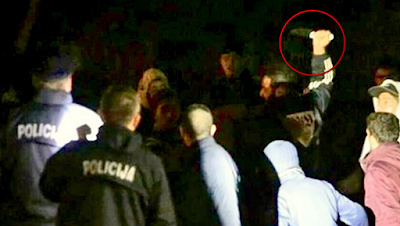 Among the immigrants waiting in Bosnia, there would be no more Syrians: "The mass comes from Pakistan. And there are many Iranians, Algerians, Moroccans. "Their goal is not Austria:" The migrants want to Germany, on to Scandinavian countries. Austria now has too bad a reputation for her. "

The supply of these masses of people is "relatively well regulated" report the liaison officers: Many immigrants have prepaid credit cards of UNHCR and UNICEF.

"Europe does not want to impose any help on the Croats," emphasizes the Interior Ministry. At the same time, a breakthrough in Velika-Kladusa should be prevented for this reason alone, so that this does not become a signal for the departure of tens of thousands more migrants.


The original German text is at the link.  Bold, underlined text in the translation above is my emphasis.

So, for these young men of working age to get to a welfare state where they won't have to work, they're willing to do whatever it'll take - even attack border police using knives.  It seems they think they're entitled to go there - that somehow, magically, it's their human right.  So much for the kind of law-abiding residents they'll be if they get there!

These are the kind of "refugees" who need to be turned back to the countries from which they came - by force if necessary.  There's no place for them in a civilized society.

20,000 men armed with knives at the gates? If I recall my history this is not the first time this has happened...

Well, they DO come from an uncivilized society.

These are not "migrants"; they're armed INVADERS....

The west, including the US, has to make a choice. Save civilization. Or let civilization drown in a horde of uneducated people wanting to come to the "easy" countries instead of doing the "hard" job of pulling their own countries out of being hell holes. As long as it's easier to get to the western countries, change will never happen in the hell holes run by despots.

Turned back? Nope. Slaughtered like the dogs that they are would be the appropriate response.

Deploy belt-felt machine guns to enfilade the Croatian side of the border and open fire once a critical mass has passed into Croatia. Borders should be inviolate.