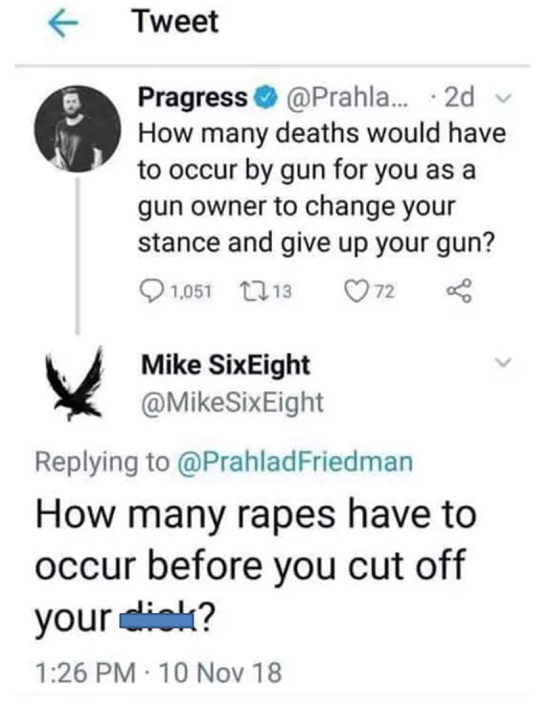 Absolutely true.  My guns, while they've been in my possession, have never killed anybody, and won't unless that person is an immediate threat to the safety and security of myself and/or my loved ones.  Why should I give up my guns because of someone else's criminal actions?  And if a death by firearm wasn't a crime, but legitimate self-defense or justifiable homicide, why does that call into question anyone else's possession of a firearm at all?

Yet again, the gun-banners are trying to fixate on a thing, rather than the person who wields it.  A gun has no moral volition of its own.  Leave it alone, and it will just sit there, like a car, or a hammer, or a chainsaw.  None of those things are a threat if they aren't misused.  When they are, they aren't morally or legally liable - the person using them is the one held responsible for crimes committed using them.  What's more, if that person didn't have access to one instrument (e.g. a gun), he or she could very easily access an alternative (any of the other items mentioned, or many others equally dangerous in criminal hands).  To blame the gun is to miss the point completely.

Most of the gun control laws either in force or being proposed are based on the belief that an evil or crazy person, bent on crimes up to and including murder, should they be refused the sale of a legal firearm, would simply give up their plans and behave themselves.
The efficacy of this approach is best demonstrated in the magnificent success we've seen in our government's war on drugs.
It also depends on the belief that a death by firearm somehow counts more than one committed by knife, club, fire, or bomb.

I am so stealing that rejoinder.

Oh, and thank you to Thomas Whispered for reading Twatter, so I don't have to.

The problem with that rejoinder, these days, is that with the weirdness loose in the Progressive Left, you run a real risk of being told "I already did"

"Ted Kennedy's car has killed more people than my guns."

Uncle Lar, I disagree with you.

Most, if not all gun laws are designed to restrict and deny citizens the right of self-protection, from both criminal elements and the government.

What better way to make a person reliant on a faceless bureaucracy and government employees than to make the FB and GE the only source of 'protection.'

In some ways, the various Mobs and Gangs are much more straightforward and truthful in their various protection rackets.

This is going to get ugly... It's not going to be pleasant the next couple of years for gun owners.

... or the outraged cry "Did you just assume my gender? Not all men have a penis, you know."

I saw an article a couple weeks ago that brought some sense to the fight. It was revealed that of all those gun purchasers denied a firearm at point of sale because of criminal background (about 50,000) last year, not one single one of them was prosecuted for attempting to violate the law. Not one.

I liked to shoot and did so a lot back when the ranges were right down the street. Less so after moving to metroparkcentralis where the ranges are far away.

Another perfect example of sophism:
Conflating the very existence of certain items themselves with the mindset and intent of a fragment of any potential users of such.

The point is that attitude, individual priorities, and the decision to follow through on such are the real determining factors of whatever goes down.