This may add an entirely new dimension to marine pollution


I haven't heard the British-English idiom "to cry stinking fish" used in American English much, but it may be very appropriate to this report.

Norway’s Hurtigruten, best known for the ships that ferry tourists along the country’s fjords and coastline and up into the Arctic, is investing 7 billion crowns ($826 million) over three years to adapt its 17-strong fleet. 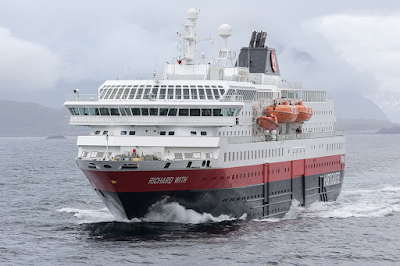 Six of its older vessels will be retrofitted to run on a combination of liquefied natural gas (LNG), electric batteries and liquefied bio gas (LBG).

“We are talking about an energy source (LBG) from organic waste, which would otherwise have gone up in the air. This is waste material from dead fish, from agriculture and forestry,” Hurtigruten CEO Daniel Skjeldam told Reuters in an interview.

“Our main aim is to improve and cut emissions,” he said.

I'm sorry, but the thought of a ship powered by dead fish is just too bizarre to contemplate.  I certainly don't want to smell its funnel smoke!  And as for refueling, what's it going to do - have trawlers and factory ships come alongside, to offload all the offal they've removed before freezing the edible parts of their catch?

I'm not sure Hurtigruten has thought through all that this entrails . . .

Repeat to everyone within herring distance: This will affect your sense of smelt. The effect scales up with size.

The liquified bio gas they're referring to sure sounds a lot like some form of bio-diesel doesn't it? So will it be compressed like LPG or Methane or what?

Yes, but do they have the guts to do it?

That just stinks on ice.

I wonder on what scale the exhaust smell will be compared to?

The whole point to posting this article was to set up that last paragraph, wasn’t it?

Or all it entrails?

Last time I was on one of those ships... well, it was a good while ago, nowadays there's bridges and tunnels so you wouldn't need a ship to get to where we went, and the ship (MS Lofoten, specifically) was bought by Hurtigruten afterwards due to no longer being needed there...
I was the only one in my family who was able to eat anything on the ship, everyone else was either seasick or nauseated from the smell of whatever weird thing the locals were eating, or both.

I actually kind of like some of the "weird Norwegian seafood" dishes, myself.

(Honestly I'm sure they do the bioprocessing in an on-shore facility, and they probably just use the LBG/LNG mix the same way everyone uses LNG.)