Following Mike's recommendation concerning larger-caliber firearms, I've been trying to upgrade my defensive battery.  Ideally, I'd like to replace my .38 Special snubnose revolvers with .44 Special equivalents, accepting the slightly larger size and greater weight of the latter in return for greater power and (hopefully) better performance.

In the process, I happened to run across this beauty.  (Click the image for a larger view.) 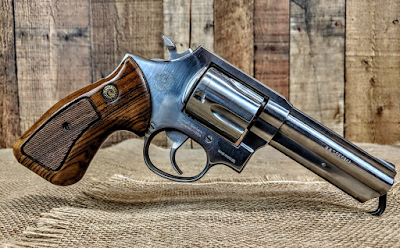 It's a Taurus Model 431, a fixed-sight 5-shot .44 Special revolver.  This example is one of the relatively rare 4" barrel models (most were made with 3" or shorter barrels).  It was made during the 1980's, but is in near-mint condition, looking as if it's hardly ever been fired.

A lot of people are "down" on Taurus for poor quality control.  They certainly had that problem during the late 1990's and early 2000's, and I've seen plenty of examples of their firearms that I wouldn't buy.  However, their earlier guns (like this one) and those of more recent manufacture were, and have been, significantly better made.  This one's in great condition, and locks up tightly.  I'm very pleased with it - and its price made the purchase a no-brainer.  The seller could have charged a hundred dollars more for it, and still found a buyer.  I just happened to get in ahead of the pack.

It's worth keeping your eye open for deals like this on the firearms auction sites.  There are bargains to be had, if you're patient.  I've seen several Charter Arms Bulldog .44 Special revolvers, old and new, available for $275-$325, which isn't bad at all.  Like Taurus firearms, Charter Arms' quality control can be spotty, so you'll have to inspect them carefully;  and they can't handle a steady diet of higher-pressure ammunition (so-called "+P" rounds).  Nevertheless, a good example is worth that price, IMHO - and the Bulldogs are smaller and lighter than the Taurus 431's and 441's (which is the same as the 431, but with adjustable sights), making the Bulldog easier to carry.  For those of us on a budget, the Taurus and Charter Arms .44's will get the job done, provided we pick good examples and test them thoroughly.

Color me happy with this one.  I'll put on a set of grips that fit my hand better than the factory originals, and call it good.

You done good, and there is something cool about an old school revolver :)

Peter, check out the Rossi M720 these can be had relativity inexpensively
and the one I have extremely satisfied with ..... It replaced my Lew Horton 657 as my truck gun when good examples started going over a grand ....... https://www.youtube.com/watch?v=8BQNCAh_4zc

Nice find. Don't see those come up for sale very often. Keep the original grips in case you decide to sell it sometime down the road. After market grips hurt the value.

My experiance with Taurus has been pretty good. They have had some quality control problems but it is easy to check used revolvers for problems and you can find good ones. Remember they are a S&W clone just made in Brazil. Good luck with your new toy.
Paul in Texas

I have a 431 and 441 3" barrel revolvers and they are in the home defense mix. They shoot good groups at 7 yards and that's all I require. Triggers are decent rather than great.
Had and traded off a Rossi 720, the unfluted cylinder seemed to be too heavy and rotational force seemed to be too much in rapid fire.

I suspect it might be from the 90's, not the '80s. Taurus revolvers had a 4th sideplate screw, up by the rear sight, through at least the late '80s.

There were some of those Rossi 720's made with a fluted cylinder. At least one. I owned it for awhile.

Peter, there is not any official +P round in .44 Special. So anything over the SAAMI pressures for .44 Special will be a result of handloading. For the 5-shots in question (those not marked .44 Magnum) I suggest sticking with standard pressure commercial loads.

I have a charter arms bulldog snub nose, and love it. Light, powerful, small.

Almost perfect for "Halitosis" range. Actually, it's fairly accurate out to 30 feet or more. I can hit center mass at 50.

Problem is that .44 special ammo is tough to find. I haven't looked at the more expensive local gun store. But I bought the last box at my favorite one, and there hasn't been .44 special in any big box retailer like Academy for some time.

Then again, it's my protection gun. Not a plinker.