A major enhancement to an already good pistol


Last year I wrote about the new Glock 43X pistol, and mentioned that it had supplanted my long-time favorite pocket carry pistol in 9mm Parabellum, the Springfield XDS.

There were a lot of rumors last year about an aftermarket higher-capacity magazine for the 43X.  They proved to be correct.  After much testing, Shield Arms released its S15 model, increasing the magazine capacity of the Glock 43X and 48 to no less than 15 rounds - a full 50% improvement over the factory offering.  Click the image below for a larger view. 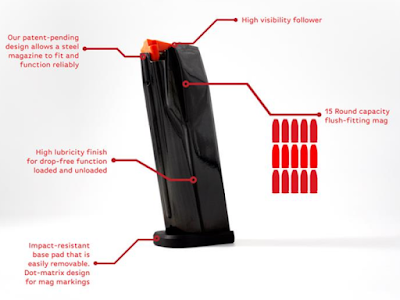 Shield Arms did away with the polymer outer layer in which Glock wraps its magazines, allowing them to make a steel magazine shell that is wider than the original.  Into that they fitted a semi-staggered design to take full advantage of the additional space, thus increasing the capacity.  It's an ingenious bit of design and engineering.

I was initially dubious whether Shield Arms could achieve the necessary reliability.  After all, if one needs a gun like a Glock 43X in a hurry, one's life may well depend on it going "Bang!" every single time.  A misfeed at the wrong moment might literally be fatal.  However, Shield Arms persevered, and got it right.  The S15 has passed several user tests (many available on YouTube), including 1,000 rounds out of the same magazine in a single day.  That's pretty convincing.

The magazines are expensive, almost $40 apiece, but they're the only ones of their kind on the market.  (There's even a +5 extension available for them, pushing total capacity up to 20 rounds at the expense of greater length and bulk.  They make the pistol too long for pocket carry, so they won't be in the gun while I'm concealing it;  but I'll use them on my reload magazines, where the length isn't as important a factor.)  I reckon Shield Arms will make a lot of money out of the S15, because it pushes the sub-compact Glock 43X's magazine capacity right up there to the same level as the mid-size Glock 19, probably the single most versatile and successful Glock model to date.

I bought a couple of S15 magazines earlier this year, and tested them with my usual 9mm. carry loads (Federal's HST hollow-point in 124gr. +P and 147gr. bullet weights).  They performed flawlessly.  Given that, plus the extensive tests to which others have subjected them, I'm willing to bet my life on them if I have to.  (I also swapped out my pistol's magazine catch to a metal version, rather than the original plastic, as Shield Arms recommends.  This is to avoid long-term wear of the plastic part against the metal of the magazine.  In addition, I'm looking into Shield Arms' products for other Glock models.  If they've done this well with the S15, I'm willing to bet they've got some good stuff elsewhere, too.)

I'll keep (and still carry) my larger Glocks when I'm wearing clothing suitable to conceal them.  A larger pistol fits my hand better, offers greater velocity due to its longer barrel, and is easier to shoot well.  However, for deep concealment in a pocket or ankle holster, or for when minimal bulk is an asset, the Glock 43X has become my go-to weapon of choice.  With the S15 magazine, it's even more useful.

(No, I'm not being compensated in any way for recommending the S15 or Shield Arms.  I bought my magazines with my own money.  I just think it's a really useful, nifty product, and wanted to tell my readers about it.)

With all due respect, and with multiple "events" in my history, the 25 yard is "nice to have" but in most practical terms, unneeded.

If you concentrate on issues that are interpersonal (zero heroes), just you and family, with avoidance and wisdom in play, modern sub-compacts work in a perfectly acceptable fashion.