We all know hypocrisy is a trademark of politicians across the spectrum, from left to right.  There are very few honest men and women among them.  The same goes for their associates, advisors, staff and hangers-on.  However, seldom has hypocrisy been so blatantly displayed, this time by Brian Fallon, executive director of Demand Justice and former press secretary for Hillary Clinton.

After President Trump had criticized Justices Ginsburg and Sotomayor of the US Supreme Court last week, Fallon sent this tweet: 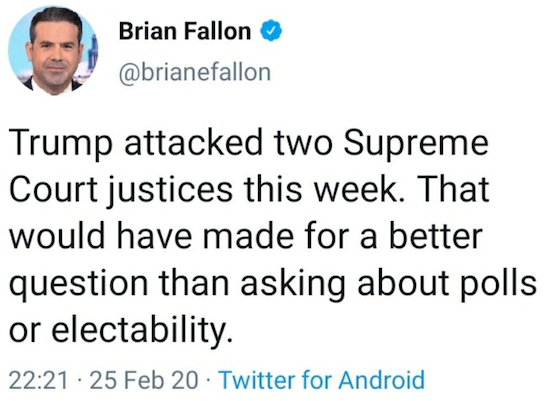 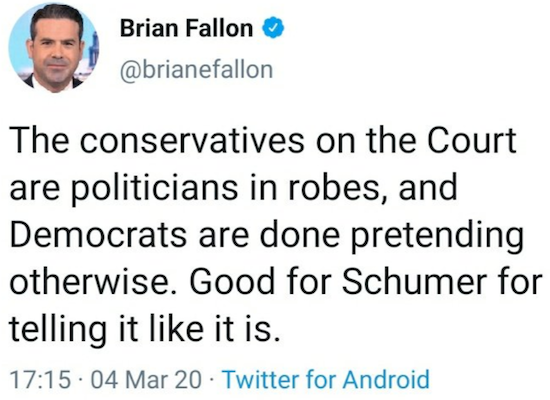 In doing so, of course, he justified (in so many words) President Trump's accusations of the previous week - but he also exposed his own hypocrisy and double standard.  "It's fine if the left wing does it, but not if the right wing does it."

Mr. Fallon, there's an old saying you might want to bear in mind.  "What's sauce for the goose is sauce for the gander".  Right is right, across the political spectrum, and wrong is wrong, ditto.

Meanwhile, you might want to give some thought to repairing your credibility, and that of your organization.  Right now, both are in rags and tatters.

HYPOCRITE, n.
One who, professing virtues that he does not respect, secures the advantage of seeming to be what he despises.

You're so kind with your description of this man. I just refer to him as another leftist asswipe.

The Left is not concerned with credibility. Nothing they say or do is credible, and has not been for generations. Nor are they concerned with hypocrisy, except as a tool to beat others with.

Schumer wasn't "telling it like it is." He was explicitly threatening two of the Supreme Court justices. Reminder, what happened to Justice Antonin Scalia can happen to you, and as such, he was committing a Federal crime. Not that he'll ever be held responsible for that.

When President Trump called him on it, he then played the "you didn't understand what I said", card. But the people listening to him knew quite well what he was saying.