One of the advantages of the so-called "digital age" is that it allows us to recreate sounds and sound effects that had long been lost to history.  One can electronically alter what one hears so that it resembles sounds that were made long ago, but which can't be accurately reproduced today for any number of reasons.

One of those sounds is the Orthodox liturgical chant used in the Hagia Sophia cathedral in Constantinople, later a Moslem mosque following the fall of that city in 1453, and today a museum.  The acoustics of the Hagia Sophia were legendary, and added greatly to the impact of the liturgical music used there.  A team at Stanford University set out to recreate those acoustics, with amazing results.

With a stunning reverberation time of over 11 seconds, the acoustics of Hagia Sophia were measured and analyzed, and auralized in real-time on Cappella Romana’s performance by the Icons of Sound team at Stanford University.

Lost Voices of Hagia Sophia presents more than 75 minutes of medieval Byzantine chant for the Feast of the Holy Cross in Constantinople, one of the greatest celebrations in the yearly cycle of worship at Hagia Sophia. 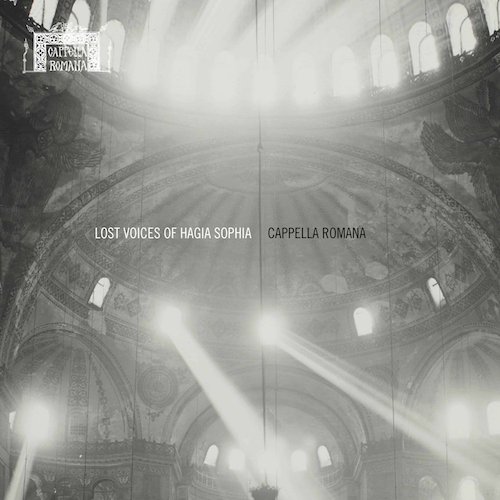 A detailed technical explanation of the Hagia Sophia's acoustics may be found here.

Here are three video clips to illustrate the sounds of the cathedral.  First, some visual images to accompany the aural effects.

Next, the Prokeimenon from the album, corresponding to the Gradual or Responsorial Psalm in the Catholic Mass, a chanted response to a Scripture reading.  The acoustics of the cathedral are electronically overlaid on the performance to produce the correct sound.

Finally, the Cherubic Hymn from the Byzantine Mass, used as a Troparion in that setting.

That's an amazing marriage of modern technology and performance with medieval history.  The CD and DVD of the music appear to be sold out at present, but the MP3 album is available.

Part of the cosmic beauty of Eastern Orthodoxy is the practice of chanting virtually all of the worship service, a practice that subsequent diminutions of Christianity abandoned. This was part of what led me from the decayed husk of Presbyterianism to the Way, the Truth, and the Life.

I suspect an 11 second reverb would be VERY hard to actually perform in. As a youth I sang with my college's (all male) glee club. We once had the privilege of performing Poulenc's Gloria in St. Patricks Cathedral in NYC with the Smith College chorus (all women). St Patrick's is no where near as large as the Hagia Sophia, but does have a long echo (at least a second, maybe 2?). Part of choraL singing is getting feedback of hearing the blend but with a couple second echo in a very live hall what you get back was mush. Greek Orthodox chant is slower paced (and more consonant) than Poulenc, but even with those slight advantages I suspect it would take much practice and discipline to not get a little lost as 10 second ago music blends with what you're singing.

I wonder if there could be a fugue effect!

On a small technical note, the prokeimena actually come before the readings indicated in Orthodox liturgics.

I notice that in that clip of the prokeimenon, one of the chanters intones the typical mnemonic phrases periodically, probably as an aid to keep everybody within the prescribed mode in view of the reverberation. If you have the scale of the mode well internalized, you can do without such assistance in a small church, but in a huge cathedral setting, the help would probably be quite welcome. I know I'll never hear music like that in my home parish, alas, but hopefully it'll sound something like this in the heavenly realms. Well, however it sounds, it'll be good.