The pandemic leads to an explosion in firearms and ammunition sales


I'm frankly astonished at the sudden, huge increase in demand for firearms and ammunition as a result of the coronavirus pandemic.  Gun shops are reporting land-office business, and ammunition vendors - even the largest online-only operations - are so swamped by sudden, massive orders that they're running out of stock.  Some sample headlines:

It's not just in a few states, either - it's all across the country.  Examples:

I suppose there are a lot of people who've never given particular thought to their need for personal security.  If one's living in a low-crime area, with an effective law enforcement presence, it can be pushed low down on one's list of priorities.  In particular, areas that are politically more liberal than others tend to see this happen.  However, let that comfortable routine be disrupted, and things change fast.  I hear from friends in several large cities that their liberal acquaintances are suddenly asking for advice on what gun(s) to buy, and asking to borrow firearms while they endure mandatory waiting periods before they can take delivery of their own.

In one sense, I'm pleased to see more and more people "getting it" when it comes to personal security.  A firearm is an almost indispensable "equalizer" when it comes to crime and violence.  It makes the weakest individual a match for the strongest, most violent attacker.  As Samuel Colt allegedly versified:

"Be not afraid of any man,
No matter what your size.
When danger threatens, call on me,
And I will equalize."


He did, too, developing the first effective revolver.  The history of successive models of Colt firearms (and their many competitors) during the 19th century bears out his claim.

In another sense, however, I'm concerned that too many purchasers will gain a false sense of security from the mere possession of a firearm.  It doesn't magically confer the ability to defend oneself, any more than the possession of a musical instrument makes one a musician, or the possession of a motor vehicle makes one a competent driver.  Each tool - and that's what they are - requires training and practice to master, and use effectively.  I hope those buying guns now will also take the time and trouble to train with them, and keep in practice.

As for ammunition, those of us who've owned guns for a long time are well aware of so-called "ammo droughts" in the past (for example, in 2013).  There's another one brewing right now.  My favorite ammo supplier has actually stopped taking new orders, because they're so swamped with existing ones.  They aren't even going to try to replenish their inventory until they've caught up - and restocking may be harder than one thinks, because ammo inventories all over the country have been drastically depleted by the sudden buying frenzy.  At our local gym, Miss D. reports that some anxious gun-owners have even mentioned phoning manufacturers directly, trying to find out what they're doing to produce more good self-defense ammunition in a hurry, so that dealers will be able to get fresh stock.  They haven't learned anything for their comfort, of course . . .

A few years ago, I posted this image of one gun owner's ammo stash. 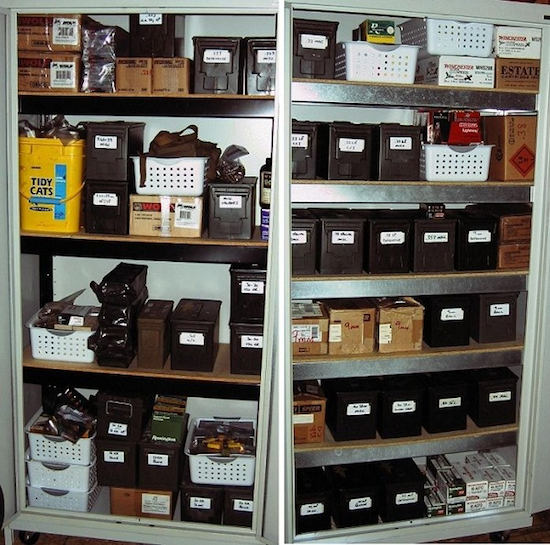 That's a comforting thing to have in reserve at times like this, when many other gun owners are frantically hunting for ammunition.  I don't have two cupboards full of the stuff, but I have more than enough for my short- to medium-term needs, thank you very much.

My only regret is that my recent sales of firearms, to cover medical bills, appear to have been a couple of months too soon.  I could get a lot more for my guns today than I did in January!  Come to think of it, I still have a few in my safe that I earmarked for sale, but didn't dispose of at the time:  a couple of shotguns, an AR-15, and a handgun or two.  Time to put them on the market, I think, along with some of my ammunition that's surplus to requirements.

EDITED TO ADD:  I dropped in at my local firearms dealer this morning, to see how he was doing.  He said, with a chuckle, that a few days ago he put a sign outside his business:  "4 rolls of toilet paper, $500 - plus a free gun!"  He says he had twenty customers before lunch that day, asking about the deal.

Many of the sales folks at gun shops are reporting that current buyers are first-time gun buyers. Will be interesting to see the results of that in 6 months, either some new gun people or a ton of unfired panic guns on the used market... Maybe both

This tends to be a movable mark.

I stopped by our local range/gun store to pick up some .32 (which they had). African American couple was picking up a 1911 for him and a small semi auto for her (with pink handles). Fortunately, they signed up for the intro training class too.

I'm always looking to expand my collection, but the pickings are slim right now.

Everybody should make sure that their stash is protected in case of miscreants, especially if they don't know their neighbors and have to be away from the house at times.

One option I like for securing ammo is a worksite tool box - small to medium ones by companies like Delta will hold a considerable amount of ammunition and secure it better than many of the 'security cabinets' that are sold for gun and ammo storage.

Great.
A wealth of first time gun owners.
And everything they know about firearms they have learned from movies, TV, and the media.
Up to now I have been mildly concerned about this whole Covid19 business.
Now I'm frightened.

Here are the things I see that are driving gun sales at this time:

1. The DNC electoral process. Every debate has focused on 'gun control' and 'gun bans' and each cycle gets more wide-spread and worse. Just look at Biden, yelling at an auto worker about his AR-14s.

2. Police and 'Justice' departments openly saying that they will not arrest or prosecute for many or most offenses.

5. Mayors and County Commissioners and State Governors enacting bans on sales of firearms during this 'time of emergency.'

Any one of these points would drive up gun sales.

I made an order to my dealer Sunday night.

I swear I'm just replenishing my supply, not panic buying. I just hit my reorder level for 9mm Makarov ammo.

I got an email on Wednesday that their orders are so large that they're working around the clock and looking at a 3 week turnaround.

Academy sporting goods has empty ammo shelves, and there was a long line buying guns.

I’m wintering in florida (michigan is home) and a regular visitor at a local gunshop/range. they have been very busy with sales the last couple of weeks but I havent seen an uptick in range use. As often as not I’m the only one in the range. As someone mentioned there may be some good bargains in “unused used guns” next year. Without any foresight, but a desire to not travel too heavily laden with ammo, I ordered a bunch of 9mm and .22 to be delivered where I’m staying, it’s come in handy as ammo is in short supply.

I went to Academy to buy some ammo for my Garand, and the shelves were almost empty. You can check out my blog on my misadventure there. I ain't overly concerned about my ammo supply unless I get into a sustained firefight and siege. Short of that, I ain't concerned.

Those of us who are over 29 remember the LA Riots of 1992.
The Roof Top Koreans had organized and formed shooting clubs prior to the riots.
One of the sho owners reported that his group expended about 500 rounds of 12 gauge ammo during the event.
They did not cause any fatalities, but the bad guys decided that the Korean business was good to stay away from.
This indicates that they are stockpiled a pretty good supply and had trained prior to things getting sporty.