In Weekend Wings #3 we looked at the historical relationship between the Sopwith Pup, the first fighter to operate from an aircraft carrier (in 1917) and the forthcoming Lockheed F-35 Lightning II, which will be the latest to do so. There were two sets of questions from readers about that post. The first, concerning biplanes, was answered last week. The second, from three readers, was to ask what the Soviet Union had done to match the USA and the West in the operation of aircraft carriers and the development of vertical-take-off aircraft like the Harrier and the F-35B model of the Lightning II. I'll try to answer that here.

One has to understand the Soviet approach to air power at sea from two different perspectives. The first is that of the Soviet Union as a whole and its national priorities. After World War II the nation was exhausted. It had to rebuild its national infrastructure across an area of over a million square miles (larger than Western and Southern Europe and Scandinavia) which had been left devastated, and it had lost something like twenty-five million dead. The Soviet government focused on building land defenses against invasion, including taking over the nations of Eastern Europe and forming them into a pro-Soviet 'alliance' (by force if necessary) to provide a buffer zone against future invasion; spreading the 'gospel' of Communism to surrounding nations and territories for the same reason; and maintaining vast land and air forces to ensure that another Operation Barbarossa would not succeed. Since naval power had played a relatively minor role on the Eastern Front in World War II, it was very much the 'junior partner' in developing such strategies and tactics in the first post-war decade.

On the other hand, the Soviet Navy had forceful, innovative and energetic leaders, particularly Admiral Sergei Gorshkov. This visionary strategist was to parry Krushchev's efforts to dispose of most of the Soviet Navy's large surface combatants in the 1950's, ascend to command of that service and formulate its policies and strategies for over a quarter of a century. He was pragmatic and realistic in his objectives, promoting the development of a balanced fleet that would be able to break out of the geographical constraints limiting Soviet sea power and, at the same time, use those constraints or 'choke points' as defensive lynch-pins to hamper opponents seeking to use sea power to threaten the Soviet Union.

Gorshkov recognized that he would always suffer under financial constraints, as the Army, Air Force and Strategic Forces (i.e. the nuclear deterrent) consumed the bulk of the Defense budget. He accordingly began to build up his fleet using ships of destroyer and cruiser size, arming them with powerful long-range missiles to target US carrier battle fleets. He also emphasized anti-submarine capabilities to try to keep US ballistic missile submarines far from Soviet shores, and - even more important - keep US attack submarines away from Soviet ballistic missile submarines.

It was in support of the anti-submarine mission that the first Soviet 'aviation cruisers' were developed. The name is deliberate. In terms of the Montreaux Convention of 1936 passage of aircraft carriers through the Dardanelles (the strait separating the Black Sea from the Mediterranean Sea) is prohibited: therefore, by calling their vessels 'aviation cruisers' the Soviets could sidestep this legal roadblock.

The first 'aviation cruisers' of the Moskva class were actually hybrid vessels, the front half being that of a large cruiser with a heavy missile armament and the rear half a flat helicopter platform. Two were built, Moskva being taken into service in 1967 and Leningrad in 1968. They weighed about 17,000 tons. They reportedly suffered from serious mechanical problems and had difficulty keeping station in heavy seas. Both served until the early 1990's. Leningrad is shown below. (As always, click on the pictures for a larger view.)

These ships carried up to 14 Kamov Ka-25 helicopters, which could carry anti-submarine depth-charges and homing torpedoes and also provide mid-course guidance to long-range missiles fired from the ships. The 'trademark' feature of the Kamov helicopters was that they used a double contra-rotating main rotor, one set of blades turning clockwise and the second anti-clockwise. This meant that no tail rotor was required to counteract the torque of a single rotor, and the double rotors could also be of smaller diameter than a single rotor. That in turn meant that the helicopters could be spaced closer together on a ship's deck. The Ka-25 was later developed into the very similar-looking Ka-27. A picture of the Ka-25 is shown below, followed by another of the Ka-27. The similarities are obvious. Video of them in operation can be seen later in this post.

While these ships were being designed and constructed, the Yakovlev aircraft design bureau had been working on the prototype of a Soviet vertical take-off and landing (VTOL) aircraft. They followed British experiments with the P.1127 and Kestrel with great interest, and their first design, the Yak-36, used similar thrust-vectoring technology.

This was a strange beast indeed. It had three engines, one providing horizontal thrust and two vertical lift (the latter being shut down for normal flight). It was a very difficult aircraft to fly, as numerous accidents demonstrated: if one or both lift engines lost power during vertical flight (or on the runway if a short take-off run was used) the results could be disastrous. The following two videos demonstrate this clearly. The pilot ejected safely from the first incident: in the second, Oleg Kononenko died in the crash.


Despite these problems, for the next couple of decades, as far as Soviet naval aviation was concerned the Yak-38 would be the only fixed-wing game in town.

In the late 1960's Project Orel was launched to design a nuclear-powered aircraft-carrier of some 80,000 tons. However, with the death of Defence Minister Marshal Grechko political support for the project vanished, as his successor, Dmitriy Ustinov, had other priorities. As a result a smaller class of 'aviation cruiser' was designed. The first, Kiev, was commissioned in 1975 and entered service in 1977 after extended trials. Four ships were built, each carrying 12-13 Yak-38's and 19-20 Ka-25 helicopters (later its successor, the Ka-27). They were significantly larger than the Moskva class at over 40,000 tons and gave the Soviet Navy its first organic air element, although the Yak-38's were limited in their armament, range and effectiveness. Like the Moskva class, the ships carried a heavy missile armament and were intended to provide protection and support to Soviet ballistic missile submarines and other fleet elements. The third ship of the class, Novorossiysk, is shown below.

To develop naval aviation further the Soviets needed two things. First was the political will and commitment to fund the larger ships that would be required. Second was an aircraft that could provide meaningful performance and protection to the fleet and project power. A small V/STOL aircraft like the Yak-38 (or the Harrier) can't do this because it's limited in range and payload. To carry a heavy load of bombs or missiles an aircraft needs a long take-off run to gain enough speed to become airborne. It can do this on a conventional runway, or be accelerated faster by means of a catapult (as is the case on US aircraft-carriers). That requires a much heavier aircraft structure to withstand the G-forces of catapult acceleration, and even more reinforcement to withstand carrier landings (which are essentially a 'controlled crash' onto the flight-deck).

The ship was approved after Defence Minister Ustinov witnessed the limitations of the Kiev class during exercises in 1981. The new ships were to be of about 65,000 tons, a significant increase in size over the Kiev class but still much smaller than US aircraft carriers. They would not incorporate catapults, but use a raised bow known as a 'ski-jump' to lift aircraft into the air.

To serve on the new carriers design efforts were put in hand to convert shore-based fighters for naval operation. The Sukhoi design bureau modified its successful Su-27 fighter (an F-15 equivalent) into the Su-33 naval version.

In the event the Sukhoi aircraft was selected for production, although MiG sold its navalized MiG-29K to India recently for use on that country's proposed aircraft carrier (of which more later). The Yakovlev bureau developed a new design, the Yak-141, which was supposed to be a supersonic V/STOL aircraft, but it apparently was never able to fly at supersonic speeds and exhibited serious handling problems. It was not approved for production. The following picture shows the prototype.

The first and second vessels of the new class were to be named Tbilisi and Riga, but after anti-Soviet unrest in those cities they were renamed Admiral Kuznetsov and Varyag. The first of these was launched in 1985, but her completion was delayed due to the political turmoil which led to the collapse of the Soviet Union. She was eventually commissioned in 1995 in the Russian Navy. 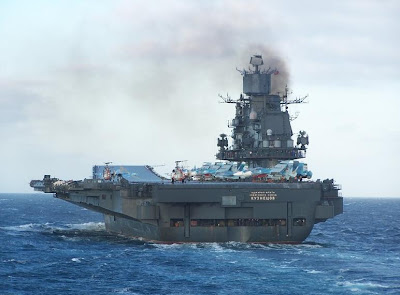 Her sister ship Varyag was left half-built in a Ukrainian shipyard and eventually sold to China without engines or major equipment. It's rumored that China is using her hulk to learn lessons about aircraft-carrier design in preparation for building their own versions.

In the final days of the Soviet Union a new and, at last, fully-fledged aircraft carrier was designed and laid down. The Ul'yanovsk was to have been nuclear-powered, with steam catapults, and weigh about 75,000 tons. However, with the collapse of the Soviet Union construction was halted at a very early stage and the hull was broken up for scrap.

The Admiral Kuznetsov is currently the only aircraft-carrier (er, sorry, 'aviation cruiser') in service with the Russian Navy, all of the Kiev class having been retired. It carries a dozen Su-33 fighter-bombers, five Su-25UTG two-seat training aircraft to help aircrews making the conversion to carrier operations, and about twenty Ka-27 helicopters. It has no catapults, relying on conventional take-off for its aircraft (which limits their weapon load, as mentioned earlier). The Su-33 is far more capable than the Yak-38, even with this limitation, being in the same performance class as the US F-15. It's also had its share of accidents aboard the Kuznetsov (as is inevitable in such a difficult operating environment - the US Navy regularly loses aircraft from its carriers for the same reason).

The Kuznetsov remains in service, and will likely continue as the only vessel of its type in the Russian Navy for the foreseeable future. It's just completed a tour of operations in the Mediterranean Sea. Within its limitations it remains a formidable opponent.

Interestingly, the last of the Kiev class of aviation cruisers, the Admiral Gorshkov, has been laid up inoperative for several years. In 2004 India contracted to purchase the ship, a squadron of MiG-29 naval fighter-bombers and six Kamov helicopters. Extensive modifications and upgrades are being carried out in Russian shipyards, including stripping her of most of her missile armament and extending the flight deck into a 'ski-jump' configuration. She is expected to be commissioned as the INS Vikramaditya in 2010. Pictures of her are shown below, first in Soviet service and secondly in model form as she will look after the conversion specified by India is completed.

This is like catnip to a military tech geek.

FYI- The last 2 (of 12 IIRC) SU-25UTG's built and delivered to Kuznetsov have targeting sensors and racks- they are, in theory, strike capable. I heard rumor they practiced a bit during the recent deployment.