A rare opportunity for aviation buffs in England


The Avro Lancaster bomber was the most successful British heavy bomber of World War II, carrying a far greater bombload than the US Boeing B-17 Flying Fortress or Consolidated B-24 Liberator.  Indeed, the bomb shackle used by the Lancaster to carry the 'Tallboy' and 'Grand Slam' so-called 'earthquake bombs' was fitted to the B-29 Superfortresses used to carry the nuclear bombs dropped on Japan, because the standard US bomb shackle couldn't handle their weight or bulk.

7,377 Lancasters were built during and immediately after World War II, but only two remain in flying condition.  One is operated by the Royal Air Force's Battle of Britain Memorial Flight, making regular appearances at air shows throughout the UK.  The other was restored by the Canadian Warplane Heritage Museum.  Based on its registration letters, it's known as 'Vera'. 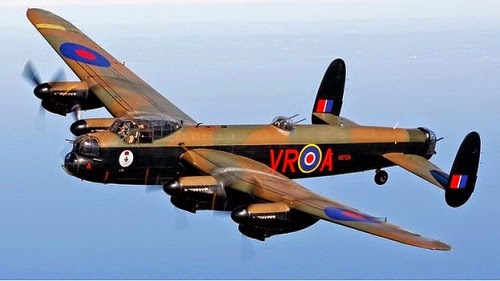 You can read more about it at the Museum's Web site.

It's just arrived in England, joining the RAF's example for a reunion at RAF Coningsby air base, used by Lancaster bombers during World War II (including those of the world-famous 617 Squadron).  I'm sure the sight brought a nostalgic tear to the eye of many former servicemen.  The Daily Mail has a detailed article about its arrival, as well as a series of excellent photographs.  Here's one to whet your appetite, greatly reduced in size to fit this blog. 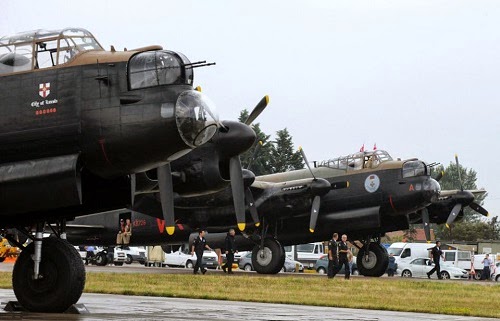 I'd love to be there to see them!  That's real aviation history.  The sound of their engines is glorious, too.  Each Lancaster used four Rolls-Royce Merlin engines, the same ones used in the Spitfire, Hurricane and Mustang fighters.  Warbird enthusiasts will know their sound well.  More Merlins were manufactured by Rolls-Royce for the Lancaster bomber program than for any other aircraft during World War II.

Here's Vera's arrival at RAF Coningsby in England.  I recommend watching the video in full-screen mode.

I'm fortunate to live about 30 miles from the Canadian Warplane Heritage Museum. That Lanc has been adopted as a sort of community pet by the local TV station, and does a flypast just outside my bedroom window as part of Toronto's annual air show.

That is a beautiful sound! :-)

Not "a" Merlin, four synchronized Merlins.
Wife and I got lucky one year and accidentally did the annual show. We've been members of the CWHM ever since.
If she ever gets well enough for me to take her up there again, she has a bought and paid for seat on the Lanc for the annual one hour flights they do.

What a great plane.

Alex Henshaw, chief test pilot of Spitfires, also tested the Lanc. He was so impressed by the handling qualities of that bomber, that he would finish a test flight with a barrel roll. See his book: "Sigh For A Merlin".

If only somebody could have done something about that frigging helicopter....

Enjoy. My dad was a B17 pilot with the 8th Air Force. When I was in uniform, a warrant officer huey pilot said the same--helo's are rejected. Then they have to thrash the air into submission.