Ebola: this s*** is getting serious

The World Health Organization (WHO) said on Tuesday it had shut a laboratory in Sierra Leone after a health worker there was infected with Ebola, a move that may hamper efforts to boost the global response to the worst ever outbreak of the disease.

At least 1,427 people have died and 2,615 have been infected since the disease was detected deep in the forests of southeastern Guinea in March.

The WHO has deployed nearly 400 of its own staff and partner organizations to fight the epidemic of the highly contagious hemorrhagic fever, which has struck Sierra Leone, Liberia, Guinea and Nigeria. A separate outbreak was confirmed in Democratic Republic of Congo on Sunday.

The WHO said it had withdrawn staff from the laboratory testing for Ebola at Kailahun -- one of only two in Sierra Leone -- after a Senegalese epidemiologist was infected with Ebola.

"It's a temporary measure to take care of the welfare of our remaining workers," WHO spokesperson Christy Feig said, without specifying how long the measure would last. 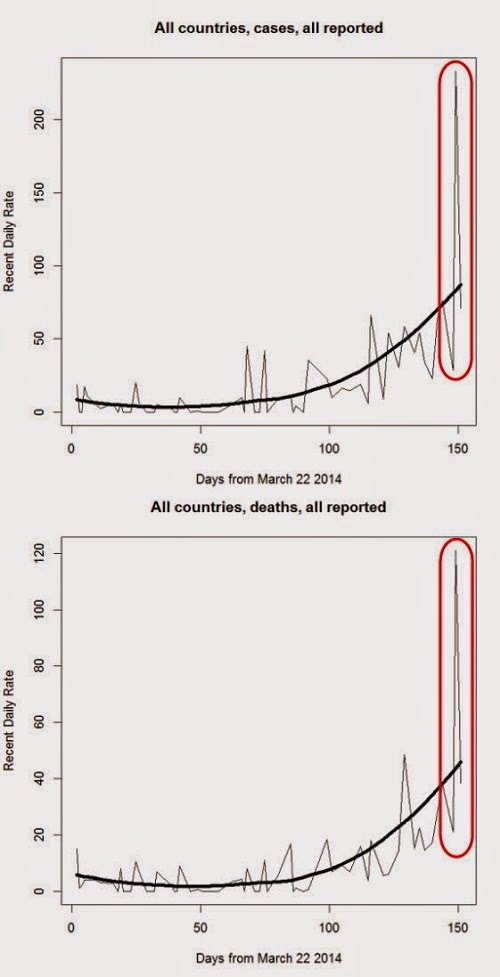 You're looking at an exponential upward spike there.  Some of it might be deaths that occurred earlier, but have only recently been reported;  but all the signs are that the incidence of sickness is rising dramatically.

Zero Hedge concluded with this comment from a World Health Organization spokesman:

It’s not “a question of incompetence or complacency,” according to Morrison ... “It’s the fact we’re catching up with the unknown, and it’s way ahead of us.”


(Bold print is my emphasis.)

I said earlier:  "I think we have to assume for safety's sake that the risk of [Ebola's] spreading around the world may be a lot higher than the authorities have so far indicated".  Given the spike in cases illustrated by the graphs above, I think we can now take that risk as a virtual certainty.  I wouldn't be planning any international travel in the short term unless I had to:  and then only on airlines that didn't fly to any of the affected countries, because whilst airlines are reported to be checking boarding passengers for symptoms, I'm not sure that their aircraft are restricted to that route, or properly sterilized in between flights.  For example, wouldn't it be fun to find out - after takeoff - that the Air France aircraft flying you from the USA to Europe had been on the West African route the previous week?  India's taking the threat seriously.  I wonder when the US will begin to do so (or at least admit publicly to doing so)?

Someone on NPR (I didn't catch who) said that the number of actual cases and deaths is likely several times higher than the reported figures.

I would question the accuracy of the later figures too. As the health care workers flee from or succumb to the sickness they are no longer able to accurately count the victims.

what better way to test the potency of a weaponized version of this virus and then hide the fact than to release it in an area where it's known to naturally exist.

it's beginning to go exponential.

There are a lot of unreported cases, I'm sure, because people want to avoid the stigma of dead family by "that" disease. It's got a fatality rate of ~80%. The closer the reported fatality rate gets to that, the closer we are to the end of the outbreak. Most people are contagious at least briefly before they are symptomatic AND after they are starting to recover, most people die in the second week after the onset of symptoms, but to recover they still need care for up to three more weeks. The lower the reported fatality rate, the earlier we are. We're still only at ~55%...
On another forum I predicted that if the *official* number of dead goes over ten thousand, it'll likely go into the millions; I stand by that prediction.

Ya don't suppose the Chinese got tired of bribing certain groups for oil/mineral rights, do ya?

Has anyone done a historical comparison with other "virgin soil" epidemics? IIRC the initial outbreaks of the Black Death and Justinian's Plague had 90% death rates in some locations, but I don't have my books easily at hand.

The spread of this is a third world problem. They don't isolate like we do here. They will pick up an infected body with no personal protection in place. That is how it's spreading over there. Over here you have even basic standard precautions that would protect the spread. There is no need for the panic people feel over here about the virus