The South African police have a ghastly reputation among the ordinary people of that country, many of whom would rather tolerate crimes committed against them rather than call the cops, for fear of the corruption, brutality and incompetence displayed by many of them.  That's nothing new, of course.  Under the policy of apartheid the police were the enforcers of legalized racism, and many were deliberately recruited from the sectors of society most benefiting from this legalized racism.  The result was an institutionalized philosophy of brutality and racial prejudice that was ingrained almost from top to bottom.  There were a few honorable policemen who did their best to fight crime - I was privileged to call some of them my friends - but even they would sadly admit, in the privacy of discreet conversation with the few people they trusted, that things were in a very bad state.  (I ran into some of the corrupt ones, too.  They were dangerous, to put it mildly, but if one was in a position to 'indulge' their corruption one could use it to get things done.  I'm not ashamed to admit that I sometimes did precisely that.)

Sadly, the end of apartheid hasn't brought improvements.  As the linked articles above help to demonstrate (and they're only a small sample of many I could have cited), the post-apartheid police service has remained corrupt and incompetent.  Most recently, it was revealed that fully a quarter of South African police officers aren't able to pass the standard qualification tests with their firearms.  In theory, at least, this renders them ineligible to be issued firearms at all:  but the last time this happened, the authorities simply suspended the enforcement of that regulation.  Looks like nothing's going to change this time either . . . so we're still going to see gun-handling like that in this photograph of a police officer 'going hot'. 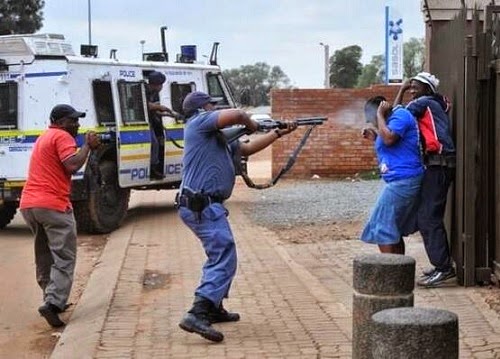 At least South Africans still have a sense of humor about such things, as evidenced by the latest weekend Madam & Eve cartoon there (still one of my regular cartoon reads, even after all these years away from the country).  Click the image for a larger view. 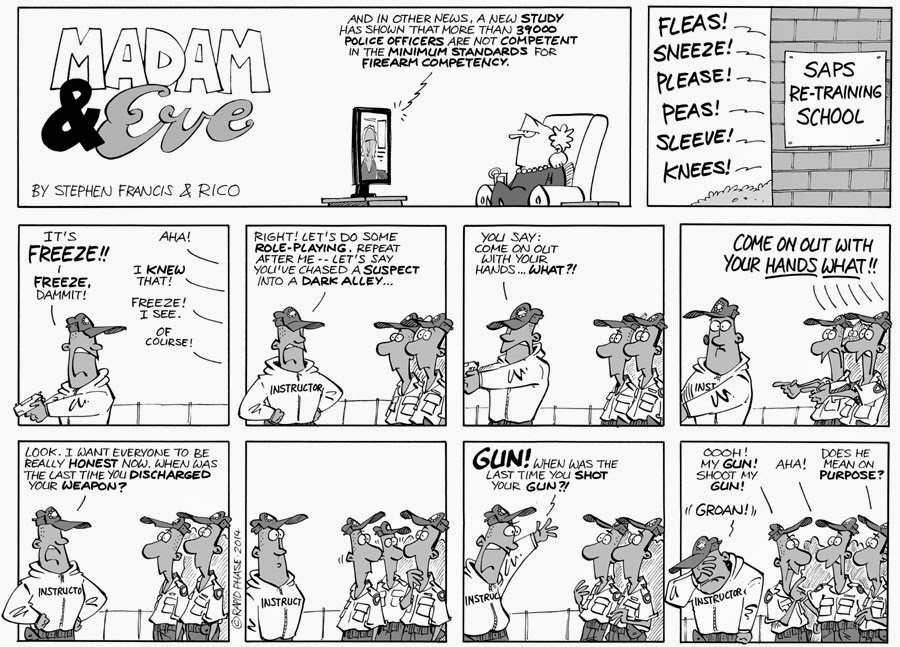 Frankly, I don't know whether to laugh or cry.  I suspect some of the South African police officers of my former acquaintance, a couple of whom taught me to shoot very well, are mightily glad that they long since left that service and no longer have to serve alongside such incompetents!

Or, you could have what we in Maryland have in Prince Georges County, where the unofficial motto of the county police is "Halt! (Bang! Bang!) Or I'll shoot!"

And their dash cams have regular problems remaining in operation when citizens' rights are being violated, usually in a brutal manner. Sometimes nine can fail simultaneously in a single felony traffic stop of a reporter investigating the County Executive (who is now in Federal prison for corruption). See http://www.nieman.harvard.edu/reports/article/100231/Two-Years-Later-Justice-Denied.aspx

Scary stuff. I'm encountering increasing numbers of Anchorage residents who fear the local PD. Those officers have an oft-repeated tendency to shoot first and ask no questions.

Their reason? Not enough of them have tasers, they said.

Tasers are one of the most abused tools carried by the cops. They kill people on a regular basis with those damn things. Partly due to them being overused, to start with.