The most critical naval flashpoint in the world?


We've spoken before about the dispute between China and Japan over the Senkaku Islands.  Briefly, China sees Japan's claim to them as geographically and historically untenable - and it's getting pretty bellicose about the situation, because control of the islands confers control of the economic area around them.  It's one of the keys to control of the South China Sea.

There are several countries involved in arguments, disputes and even armed conflict over the South China Sea.  In a recent series of infographics, Bloomberg showed in detail the countries involved and how their claims conflict with each other.  Here's a composite image showing all the territorial claims - click it for a larger view. 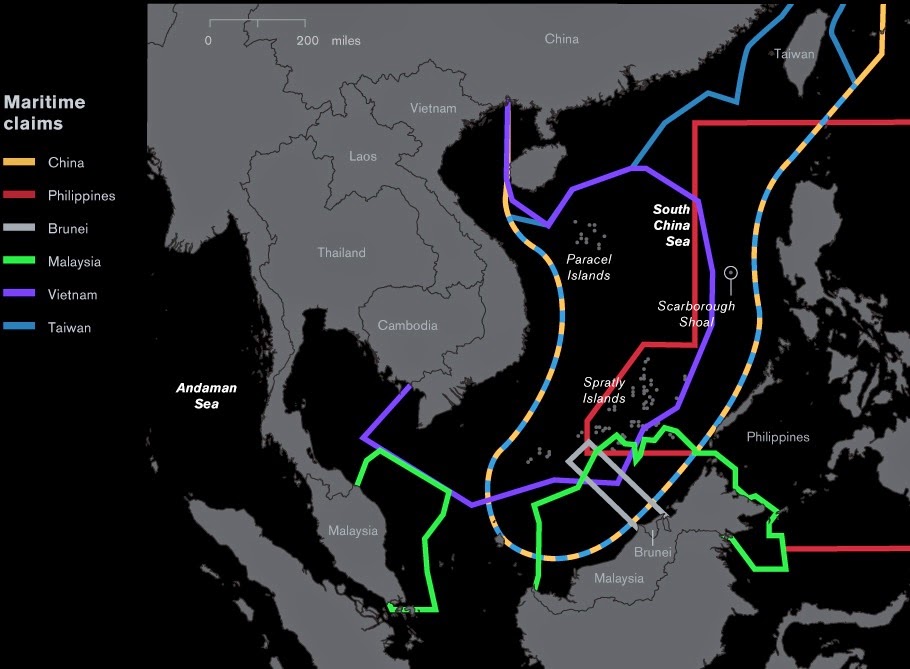 Why are all these countries arguing over who controls what part of the South China Sea?  In a word - money.  The next infographic shows how much economic activity is concentrated there.  Control of the area means control of trade passing through it or coming from it.  Again, click the image for a larger view. 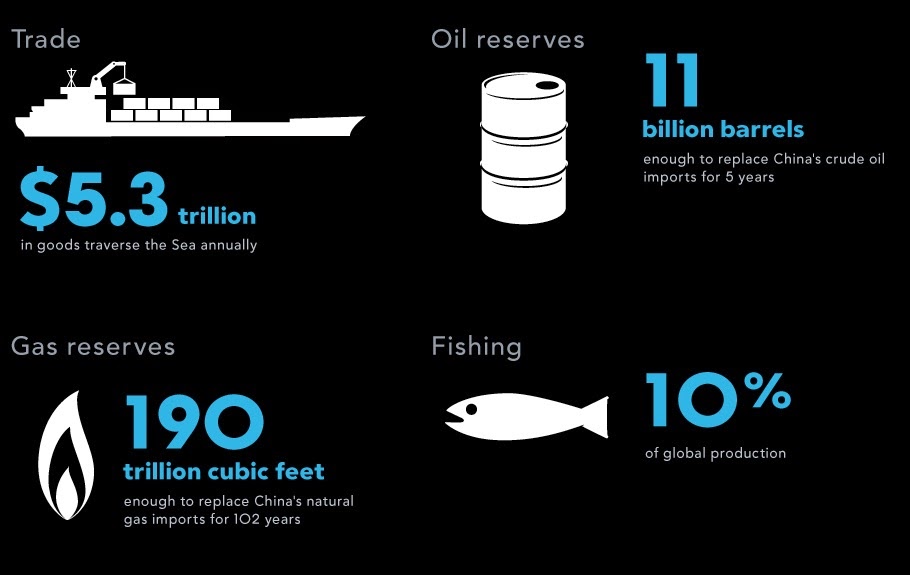 In a detailed report accompanying the infographics, Bloomberg observed:

“China’s ultimate long-term goal is to obtain parity with U.S. naval capacity in the Pacific,” said Willy Wo-Lap Lam, adjunct professor at the Centre for China Studies at the Chinese University of Hong Kong. “This is a long-term proposition. At this stage the Chinese understand they don’t have the capacity to take on the U.S. head-on.”

Sensing the U.S. is distracted by foreign policy challenges in the Middle East and Ukraine, China has been ratcheting up pressure on its neighbors, Lam said. It seized control of the Scarborough Shoal from the Philippines in 2012 as Chinese ships “shooed away” their rivals.

China in early May towed a $1 billion oil exploration rig into contested waters near the Paracel Islands off Vietnam, sparking skirmishes between coast guard vessels, the sinking of a Vietnamese fishing boat and anti-Chinese demonstrations. In an attempt to soothe tensions, Premier Li Keqiang said June 18 that “expansion is not in the Chinese DNA” and that talks can ensure stability in the region.

“The charm rhetoric is still there but the actions speak louder than words and unfortunately the actions are scaring the hell out of Southeast Asia,” said Ernest Bower, senior adviser at the Center for Strategic and International Studies in Washington. “It looks to Southeast Asia like China has taken off the gloves.”

Indispensable and highly recommended reading for anyone interested in geopolitics and the potential military flashpoints currently confronting US forces.

Bet the Vietnamese don't much like the idea of being choked to death by their comrades in communism.

Communists fighting each other is never a bad thing, though.

The genius Chinese are simply making enemies of all their neighbors. Great thinking there.

Further, everyone is going to think twice about trusting anything that they say or do. If they ever actually manage to start a hot war over their demands, they can kiss their economic trade goodbye.

Just stupid all around.

China has been fighting with Japan, over trading, since at least the 1500's. And, pretty much everyone else, at various times. Unfortunately, they've all been relying on the US, for a LONG time, to moderate the problems. Oh, well.

The Democrats are notorious for welching on agreements, and since they are running things now, and for the foreseeable future, goood luuuuck!
You're all gonna need it.

Hmmm, I wonder how many Japanese nukes it would take to shut down China?