A few years ago I published a fairly detailed article on the North American T-6 Texan training aircraft in South African military service (where it was known as the Harvard, following the naming conventions of the Royal Air Force). 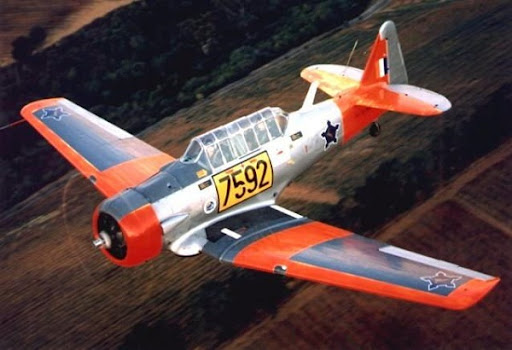 I mentioned that it had been briefly used in combat during the so-called 'Border War', in 1976, carrying 20lb. bombs and machine guns.  The images below show the camouflage paint scheme used, and 20lb. bombs beneath a T-6's wing (originally designed for bombing practice, but effective enough against personnel in the open if they fell close enough). 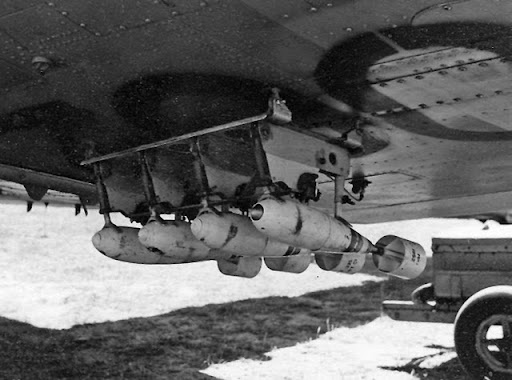 I recently read the obituary of the late Jack Sherburn, who won a British DFC (equivalent to the US Silver Star medal) flying T-6's with the Royal Air Force in Kenya against Mau Mau insurgents during the 1950's.  It contained some interesting details of that combat mission in aircraft that had not been designed for the purpose.

An experienced fighter pilot and flying instructor, Sherburn volunteered for service in Kenya in 1954. The RAF had converted a number of Harvard training aircraft to carry one .303 Browning fixed front gun and racks for 20lb fragmentation bombs to provide support for the British ground forces and Kenyan police who were tackling the insurgency.

The Harvards had become surplus to RAF requirements, and eight were formed into No 1340 Flight, operating initially from RAF Eastleigh in Nairobi. A psychological factor, which had probably not even been considered in selecting the Harvard for this role, was the high-pitched scream of the propeller, which was found to be useful in frightening and dispersing the insurgents, obviating the necessity for an actual attack.

Sherburn flew many air strikes in the forested areas of the Aberdares and the Mount Kenya region from a forward airstrip at Mweiga; the strip was at an altitude of 6,500ft and had a 400-yard dirt runway.

Distances to the target areas were so short that a Harvard could arrive within minutes of being alerted by the Kenyan reconnaissance patrols. Some attacks were carried out at night, when it was possible to locate the Mau Mau by their campfires.

Sherburn was in constant action for many months and was one of only a very few RAF officers to be awarded the DFC for operations in Kenya.

This is far from the only occasion on which armed T-6's were used in combat.  Airplane Mart's condensed history of the aircraft reports:

During the Korean War and, to a lesser extent, the Vietnam war, T-6s were pressed into service as forward air control aircraft. These aircraft were designated T-6 "Mosquitos". No. 1340 Flight RAF used the Harvard in Kenya against the Mau Mau in the 1950s, where they operated with 20 lb bombs and machine guns against the gangs. Some operations took place at altitudes around 20,000 ft above mean sea level. A Harvard was the longest-serving RAF aeroplane, with an example, taken on strength in 1945, still serving in the 1990s (as a chase plane for helicopter test flights - a role for which the Shorts Tucano's high stall speed was ill-suited). The T-6G was also used in a light attack or counter insurgency role by France during the Algerian war in special Escadrilles d'Aviation Légère d'Appui (EALA), armed with machine guns, bombs and rockets. At its peak, there were 38 EALAs active. The largest unit was the Groupe d'Aviation Légère d'Appui 72, which consisted of up to 21 EALAs. From 1961 to 1975, Portugal, also, used hundreds of T-6G in the counter insurgency role during the Portuguese Colonial War. During this war, almost all the Portuguese Air Force bases and air fields in Angola, Mozambique and Portuguese Guinea had a detachment of T-6Gs. In 1957-58, the Spanish Air Force used T-6 as COIN aircraft in the Ifni War, armed with machine guns, iron bombs and rockets, achieving an excellent reputation due to its reliability, safety record and resistance to damage.


France, Spain and Portugal operated almost two thousand armed T-6's between them.  More brief details of the T-6's combat service may be found in this article.  You can read much more about the T-6 Mosquito's service with US forces in Korea here, complete with many photographs (link is to an Adobe Acrobat document in .PDF format).  It's well written and an interesting read.  There are many more photographs of the T-6 Mosquito here.

All this goes to show how versatile the T-6 Texan was.  It accomplished far more than its designers ever dreamed of.