Today's award goes to the UK's Canal and River Trust.  It's apparently been producing a series of maps of canal and river towns in an attempt to bolster tourist interest in Britain's waterways.  Unfortunately, its map of historic Berkhamsted has attracted interest for . . . different reasons. 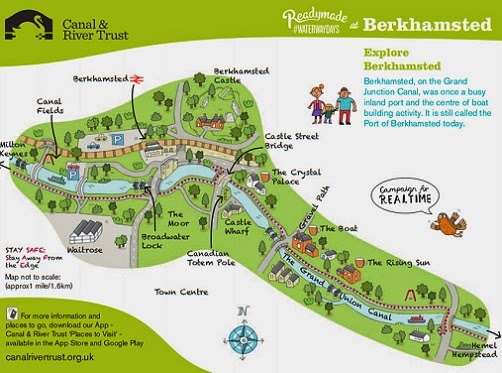 According to the BBC:

But while one of the breweries along the canal praised the map as a "great graphic", its shape was compared with male genitalia on social media.

The Canal and River Trust said it might have been "a bit naive" in not noticing its shape prior to publication.

I suppose it fits the town's history.  After all, Berkhamsted is where Willy-um the Conqueror accepted the keys of London in 1066 . . .

It's a re-purposed urology poster, of course. Oh? That's not what they were complaining about? Well, someone's mind is in the gutter, then!

This is social media we're talking about; everything is compared with genitalia there.

Somewhere in the back of the graphics design office, some 20-something-year-olds are snickering madly.

Putting the "berk" into "Berkhamsted", perhaps.

For those not familiar with cockney rhyming slang, "berk" was short for "Berkeley Hunt"

(Nowadays) not a lot of people know that:).

I find it rather disturbing that someone would look at that and see male genitalia. What does that say about the viewer? Rather similar to snickering at a fart.