Aren't these pistols magnificent?  Click the image for a larger view. 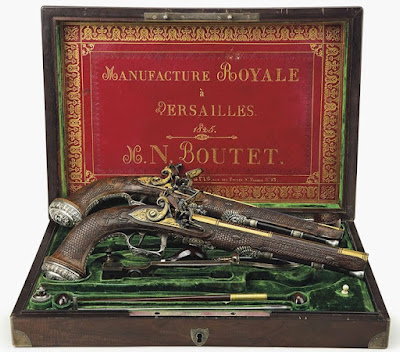 They belonged to the Marquis de Lafayette.  Christie's will auction them on April 13th in New York.  They say of them:

‘Every once in a while, we are lucky enough to work with something at Christie’s that connects us to the giants of history, so that they jump off the pages of the history books and seem alive,’ says Christie’s specialist Becky MacGuire. ‘These pistols are a perfect example, serving as a link between three revolutionary heroes: George Washington, the Marquis de Lafayette and Simón Bolívar.’

Having come from France to join the American Revolution at just 19 years old, Lafayette quickly attracted the attention of George Washington, who became his mentor. Years later, in 1825, Lafayette presented the pistols he had brought with him to another revolutionary: Simón Bolívar, who had dedicated his life to liberating six South American countries.

Intricately decorated, the pistols were made by Nicolas-Noël Boutet, the gunsmith to Napoleon. ‘These are treasures of a kind that we see really rarely,’ continues MacGuire. ‘These men shared a real zeal and a commitment to their ideals, which changed the world forever; these pistols are an embodiment of that’.

Labels: Art, Boys and their toys, Business and Commerce, Firearms, History, Technology
Email ThisBlogThis!Share to TwitterShare to FacebookShare to Pinterest

I had a long ago moment of lust like that. It was a nearly perfect, probably still usable late, not that I would 18th century French flintlock blunderbuss.

Jim Supica, now the director of the NRA Museum and an authority on S&W revolvers, used to have a business near here named Old Town Station where he dealt in antique and collector firearms. Jim has a very well developed sense of humor and his catalogs were quite entertaining. In one he listed a Model 1894 Winchester at a price $10,000+, rather steep for one of those except for one thing. It was documented as a gift from Theodore Roosevelt to Quanah Parker, the famed Comanche war chief. This was some years ago, so I imagine the price tag nowadays would be somewhat higher. Often who owned it is more important than what the item is.