Who says cats don't have a sense of humor?


Last night I posted the latest Simon's Cat cartoon.  In a comment to that post, reader Raven asked:

A long while back you wrote a post about your cat, or a friends, can't remember - it was about the cat making off with a small gun part while you had it disassembled - do you have a link to it? I about spit out my beer laughing!


That was a long time ago - in fact, it was several years before I began this blog, on a firearms forum to which I belonged at the time.  As luck would have it, I kept an archived copy of that post.  Per Raven's request, here it is.

Well, a friend arrived this evening, asking for my help in disassembling and cleaning his newly-acquired 1911. It had a full-length guide rod and a somewhat modified barrel bushing, and took quite a bit of effort to disassemble. I told him to ditch the guide rod and go back to JMB's good ol' short rod, which he agreed to do, and I gave him the necessary parts from my spares box.

All was going well until we came to reassembly of the pistol. He was doing this himself, with some supervision from me, so that he could get used to it. Unfortunately, he dropped the barrel bushing: and CJ, my ginger cat, decided that this rolling, bouncing thing was just the best toy since the invention of catnip. Before we could stop her, she'd grabbed the thing in her mouth and darted out of the kitchen door.

Tim and I pursued her, me calling fruitlessly and he cursing fruitfully (if you know what I mean). She ran straight through the living-room into my bedroom, and disappeared under the bed. Tim and I ended up lying on either side of the bed, whispering (profane) sweet nothings in her ear, and trying to reach her to get the bushing. We were just about there when Tim got impatient, and made a swipe at the bushing. He made contact, but knocked it out the bottom of the bed - to be met by my other cat, Calico, who had been most curious about the new toy her housemate had been playing with. Calico promptly seized the bushing and ran out of the bedroom.

Tim and I hoisted ourselves to our feet, grunting, and took off after Calico, hotly pursued by an indignant CJ. Calico disappeared into my study, and took refuge in my open gun safe - underneath the lowest shelf in one side of it, squeezing in behind a box of magazines.

I pulled out the box of magazines, and Tim reached in to grab cat and/or bushing. Calico, feeling unduly put upon by this strange man, promptly bit and scratched his hand. Tim recoiled, using a few words that he wouldn't normally use in the presence of a man of the cloth, and as I stooped to reach into the safe myself, out came Calico at high speed, shot between Tim's legs, and disappeared out of the door. Needless to say, she took the bushing with her...

Tim and I pursued her through the living-room and back into the kitchen, where she hid behind the fridge. While Tim moved the fridge out from the wall a bit, I made ready to reach into the hollow where the motor sits, and grab Calico: but as soon as the fridge moved, she ran for it again, between my legs and out of the kitchen door into the living-room. Here she dropped the bushing, apparently feeling tired of the fun - but CJ was watching, and promptly grabbed it again, and ended up under my bed once more.

After much puffing, panting and swearing, we finally managed to block off the bottom of the bed, and with one of us on either side of the bed, finally managed to persuade CJ that her toy really wasn't worth the effort. Triumphant, Tim grabbed the bushing, and he and I stood up and dusted ourselves off. As we did so, the noise of several things dropping to the floor was heard from the kitchen. We looked at each other in horror, and raced through - to find that while we were busy with CJ, Calico had pawed the slide, frame, barrel, etc. off the table onto the floor, and was disappearing behind the fridge with the recoil spring in her mouth!

We picked up and secured the other bits of the gun, and then went after the recoil spring. Eventually, after further misadventures, we managed to get hold of it. We ended up taking over an hour to reassemble the pistol! I've never experienced a longer, more frustrating reassembly! Still, my cats enjoyed themselves.


In another forum thread a few years later, I recounted feline misadventures with ammo supplies (involving the same cats).  I'll have to see if I can dig that one up, too. 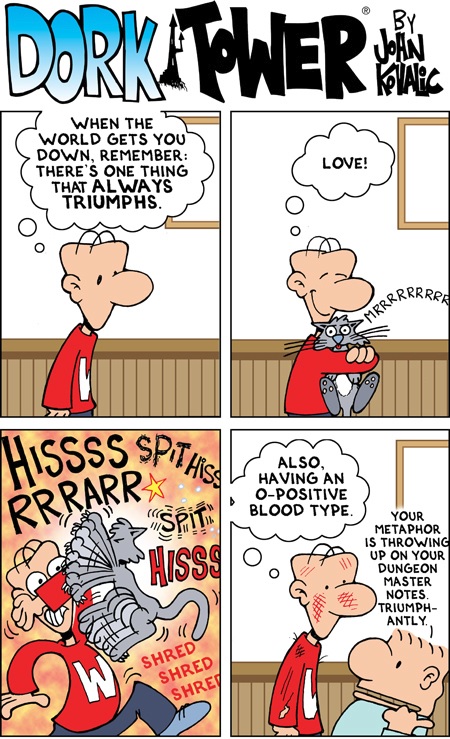 Thanks! Good story! Cats are really cool creatures- a nice snuggly bunch of innocent fuzz concealing a stone vermin killer with a sense of humor.
The good ones, that is. Sometimes they are just psycho's.

I had a stray running around here once- he was thin and fast and ran like the dickens everytime I saw him. I figured he was a feral and was going to shoot him, but held off- one day he walked over with a pitiful meow- he was starving- I fed him and he turned out to be one of the best cats I ever had, truly a prince among felines. He had run away from the neighbors the first day they got a dog. Good sense, too, they finally had to put the dog down for biting family members. Took them four years to learn, the cat knew it right off.
Kind of put into practice that quote from LOTR, where Gandalf counsels Frodo not to kill gollum, about some who get death deserving life, and can he give it to them? I was ever grateful I did not pull that trigger.