It wasn't a war crime after all


I was very interested to learn that the famous photograph of South Vietnamese General Nguyen Ngoc Loan executing a prisoner was not, in fact, what it's long been reported as being.  FStoppers reports:

This gruesome photograph [below] became pivotal anti-war propaganda that drastically shaped public opinion. The horrific frozen frame depicts a baptismal moment of unwavering distinction, a moment in a time that could not be undone, an elevated wartime tension that could not be unraveled. In this sense, the photograph was successful. It was shocking and characteristic in its ability to drive the anti war movement, protesting against brutality of the Vietnam conflict. But, what you can't see, is enough to change your perspective completely. 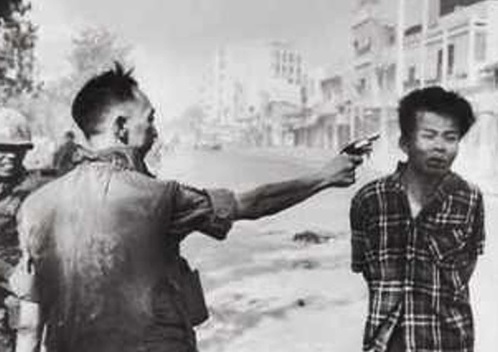 Despite assumable context, the "victim" in the photo, is not a civilian. The man being executed is Viet Cong prisoner Nguyễn Văn Lém (also known as Captain Bay Lop). Van Lem, or Bay Lop, was an assassin, the leader of a VC death squad who was targeting South Vietnamese officials. Early on the morning of the photograph, Bay Lop had led a unit of VC tanks to attack the Armor Camp in Go Vap. After taking control of the camp, Bay Lop arrested Lt.Col Tuan along with his family. In an effort to gain intelligence from Tuan, Bay Lop tortured, and eventually executed, Tuan. Bay Lop then went on to kill all the members of Tuan's family, to include his 80-year-old mother. Captain Bay Lop was then captured near a mass grave of 34 innocent civilian bodies, leaving little doubt to his involvement in the atrocity. Upon proudly admitting his participation in the horrific war crime, Bay Lop was brought in and promptly executed with the .38 side arm in front of AP photographer Eddie Adams.

While war is violent and horrific, the actions carried out by Gen. Nguyen Ngoc Loan, chief of the national police, were reasonably just. Adams later said in an article in Time, "The general killed the Viet Cong; I killed the general with my camera."


There's much more information at the link.  Interesting and highly recommended reading for military history buffs.

It's war. The terrorists committed war crime. Summary execution is the proper course of action.

He doesn't look like he's in any kind of uniform to me. Summary Execution is authorized against guerillas (AKA terrorists). Which leads me to believe this picture is a large cause of that phenomenon called Guantanamo.

I'm surprised at your ignorance of these facts. I've known what this "war crime victim" was caught doing since at least the late 1970s, and the information hasn't exactly been a state secret, either.

You might want to think about how much of your personal belief system and attitudes have been colored by exposure to Communist propaganda, over the years, and take a look at the reality behind many of these "iconic images" that went world-wide under false pretenses.

It would be an interesting study to see the imagery that didn't get wide dissemination during the Vietnam conflict. I knew a gentleman who was a combat photographer with the US Army, and who had boxes of photos and negatives that never made the news, including large numbers of those taken at VC and NVA war crime sites that made what happened at My Lai look like a cakewalk. He was one of the men present when they opened the mass graves at Hue, and some of the pictures he took still haunt my nightmares--Small children who were buried alive by the Communists, and whose mouths were filled with dirt they tried to breath, still clutched in their mother's arms.

Funny how none of that got picked up, or broadcast. The reason he was there? None of the press pool photographers wanted to document the site, and oddly enough, not one of those pictures ever made it to broadcast or publication, despite being offered up by the military.

Bay Lop was lucky he met a humane man.


The photographer, IIRC, said it was one of his worst decisions to send the photo out to the bureau for publication. He said he regretted it ever since..

Of course the commie bastards in the press here were all over this "crime".

@takirks: Not all of us lived in the USA at the time, and so we weren't exposed to the same information that you obviously had. By the time I arrived here in the mid-to-late 1990's, this was no longer under discussion; so it's not surprising that the article was news to me.

@Peter--It's not an uncommon thing that I've run into with former residents of the Commonwealth, or the rest of the world, for that matter. The Communists were a lot more adept at getting their propaganda accepted, and there are a lot of people who fell for their bullshit hook, line, and sinker--While ignoring the actual evidence as being both "irrelevant" and "biased".

It's particularly common with South Africans, because the regime slanted a lot of things against the US, due to the whole anti-Apartheid issue and the sanctions. Despite the fact that the stories and "conventional wisdoms" were coming from sources like the Botha government, an awful lot of the South Africans I've run into actually believed the bullshit they'd been told, even though a comparison between the story told by the government and the Communists would have shown an awful lot of very strange synchronicity, when you stopped to really look at it. I spent a couple of weekends going through the mass of English-language South African magazines and other publications from the '60s and '70s that an acquaintance of mine brought over, and it was... Interesting.

Many of the same story lines and "memes" that were to be found in Soviet propaganda and the work of their shills in the European and American media were duplicated, without much real change. Anything bad about the American effort in Vietnam seemed to be taken credulously, and there wasn't much space between the Soviet position and what was reported. Afrikaans-language media may have been different, I don't know--I don't speak the language, so I didn't read the equivalent stories they were publishing there. One suspects that there was a lot of penetration of the English-language media by Communist agents, because there wasn't enough room to get a pry bar in between much of what I was reading and the classic Soviet crap about the war.

Nine-tenths of what you read about the Vietnam War is either outright bullshit, or horribly slanted by omissions. All of the research and reading I've done about that conflict, which included an awful lot of discussion with actual participants on both sides, leads me to think that the "defeat" we suffered there wasn't so much a military or political defeat as a massive victory by the Soviet disinformation machine. If you go out and ask the average person, world-wide, what they "know" about that war, it is shocking to discover that the majority of their sure and certain "knowledge" consists of things like this picture, which most are certain portrays a horrific "war crime" conducted by American soldiers. Hell, I've had people in Germany insist that the General in this picture is an American CIA operative, and not even a South Vietnamese officer...

And, from such foundations, we expect rational thought on these issues?

While I wasn't old enough to be around for the war, I've heard this story before and I agree with those above - there is a TREMENDOUS amount of misinformation out there as people twist the historical record to fit their view.
Those who have no moral underpinning and no qualms about distorting the truth are many - and if it isn't intentional it is accidental through sloppy, simplistic, or lazy journalism. I don't believe technical issues I see in mainstream media because it will be wrong or biased (and often late too), so I go to technical publications for defense, diplomacy, trade, IT, etc to get a better understanding of the story.

While there are many people in the US who know this story, the vast majority don't and if shown the image would describe it along very similar lines to the propaganda version.

Don't assume that even military savvy people in the US know the true story about things like this.

The problem was and is that context is seldom provided. it is assumed that the picture tells the whole story and when that story is twisted by agenda truth dies. No the context of that photo was not widely described at best a fine print caption might have mentioned who and why but who reads captions? Put that picture at the head of a rant about oppressive brutality and it becomes an icon for oppressive brutality.

This is a demonstration of a serious national security problem. The US Army knows with certainty that the national media plays an important propaganda role in war. But in our country, we are not allowed to use that knowledge to further our national goals. This is especially true when the national news media is communist and the national goals are set by anti-communists. The other side has no such restrictions. It was bad enough in the cold war when soviet sponsorship and coordination intentionally undermined out war effort. But the crime continues because the national news media continues to write the history of the Vietnam war through the pens of soviet propaganda ministers. And the news media has gotten so used to doing it that way, that they are even anti-war when Republicans are in power, printing anti-war propaganda without restriction, and then flipping and ignoring reporting about the same wars when democrats are in power.

I was standing watch on the Bridge of the USS Courtney when the treaty ending the Vietnam was was signed. Ended for us, anyway.

Mainstream media coverage of Vietnam was mostly a pack of lies. "Uncle Walter" Cronkite, it turns out, was basically a soviet agent as was most of the network news reporters of the time. The commies knew who they had on their side, and Cronkite actually had the temerity to commit treason on his news show one evening right after Tet '68. It has taken the last 40 years for the American people to even start getting the truth about the war.

The reality is that our news media lied about EVERYTHING during the Vietnam War. As much damage as they did to the US and South Vietnam, the US military should just have dug their own mass gravesite for the bastards. Combine them with the Democrats, and it's no wonder we haven't really won any conflicts since WW2. They ARE the enemy.

The text that accompanied the photo when I first saw it some 40 years ago was that the General was executing a captured Viet Cong who had just murdered a number of civilians.

It apparently didn't take the media long to change the narrative.

Russia is back on the media, and smarter...

Coverage of the us military in Europe is super slanted. Look what happened with Bush.

The amount of bias in textbooks and the media is incredible. Howard Zinns book is standard in schools.

What Obama is doing in the ME reminds me of Johnson...

Napalm girl, while a legit commentary on the horrors of war, is another image that was--and still is--used to tell a seriously twisted tale, sometimes with a context-deephasizing crop.