The New York Post has a very interesting exposé of how millennials are exploited by hi-tech startup companies.  Here's an excerpt.

Tech startups love millennials. Tasty, tasty millennials who get underpaid, overworked, churned up and turned into nourishment for venture capitalists. Millennials are the Soylent Green of the tech world.

As each batch gets mashed up, there’s a long line of new hires eager to be made into the next meal for the execs and their billionaire backers, as tech survivor Dan Lyons shows in a scathingly funny new book, “Disrupted: My Misadventure in the Start-Up Bubble” (Hachette Books). 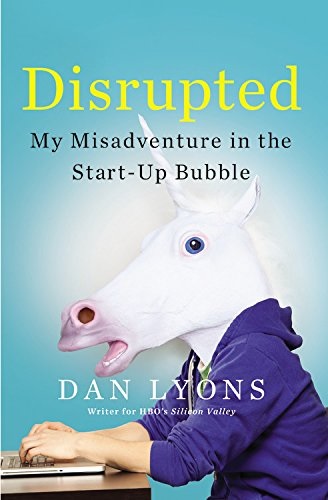 How worried was HubSpot about what secrets would emerge in the book? Very. At the company, three top execs were implicated in a scheme to suppress the book, which led to an FBI investigation of alleged extortion and ­email hacking. The FBI closed its investigation with no charges filed. But two lost their jobs and a third, the CEO, was reprimanded. In a press release, HubSpot said the personnel actions were taken “in connection with attempts to procure a draft manuscript of a book involving the company.”

HubSpot comes across as a kind of kindergarten cult that plies its young charges with parties, toys, naps, playtime — and not much pay. A huge chunk of potential compensation at tech startups comes in the form of stock options, which could turn out to be worth nothing but are certainly worth nothing if employees get so burned out that they leave before the options vest.

This is part of the plan. Tech firms basically operate like South African gold-mining operations, with confident young Tame Impala fans being the bodies thrown into the pit to break their backs digging up nuggets. All of the IPO gold, though, goes straight into the pockets of their masters topside.


There's much more at the link.  Recommended reading.

My father taught me at an early age that when it comes to compensation, cash is king.  Something 'as good as cash' often isn't, but there are some corporate 'perks' that come close.  However, to be offered something that basically has no cash value to you isn't compensation at all - it's flattery.  For that reason, as I rose in the ranks in the IT profession in South Africa, I moved to smaller and smaller companies, because they paid in hard cash with fewer so-called 'benefits'.  At the end of my IT career I was making a six-figure salary (in the late 1980's), with no perks whatsoever.  It was all cash.  I never regretted that, because the cash allowed me to live in a four-bedroom apartment and help others with whom I was working to alleviate the national crisis that accompanied the end of apartheid.

The article appears to describe the sort of environment inhabited by some notable politicians these days;  unicorn farts and rainbows (corporate edition).  I'm glad I don't work there.

Labels: Boys and their toys, Business and Commerce, Men At Work, Moonbattery, Political Correctness, Weird
Email ThisBlogThis!Share to TwitterShare to FacebookShare to Pinterest

Oh, I got caught in that pre-IPO business in California about 17 years ago. Just the once. This Huntsville company wanted to open a California office to get into automotive tech training development for the Japanese big three. They hired me to run the office - which as month followed month continued to consist of me. I told them when I interviewed that I'm a training developer, I'm a tech writer, I am emphatically not a salesman. But month after month, the only work this 'california office' brought in was stuff I could have done more profitably as a freelancer. I was offered the world once the company went public. Had my doubts, but hung around to see what would be.

Nevertheless the company had a california office. Then just before the IPO, a hatchetman came out from Huntsville to fire my underemployed ass. Thence I was not in on any of those promised options.

Another guy I knew in the company told me that I was far from the only one, and that the hatchetman returned to Huntsville to meet the axe himself that very week. I didn't know him from Adam and shouldn't have held a grudge, but I will admit the information gave me some pleasure.

I've actually worked several high-tech pre-IPO companies. Some (most) were busts, some did OK, none were a smash hit. And I'm working one now.

The difference is that I'm an older guy, and I've never taken stock options in lieu of cash - I always asked for (and got) a market rate salary. When you have kids and a mortgage, taking stock instead of cash is about as sensible as planning to fund your retirement with your lottery winnings. But for most of that same period I've had decent (if not huge) stock options, too.

Did I get rich on the stock options? Not really, but I have (cumulatively) made 3-4 years of extra salary from them in the last 30+ years. And I know others who've done about as well, and are equally realistic about our chances.

Getting rich on our stock is a (rare) possibility, but not an expectation. (I did know a couple of people who get millions from their stock - usually, it was a matter of being in the right place at the right time. But that's out of hundreds of people I've known and worked with.)

Giving up salary for stock is, at best, a gamble. If you can live like a monk, have no dependents, and no ongoing financial obligations it may be a chance worth taking just to say you tried - but if you do so, make sure you get some guarantee that you'll at least get some stock (guaranteed early vesting in case of layoff or acquisition - and get that in writing!), and don't make any plans that *depend* on your stock option until it's been exercised and the stock has sold.

Now if I could only get my nephew (who *has* done the IPO burnout a couple of times) to understand this . . .

Screw the pre-IPO companies. This is absolutely standard practice in the game industry. They hire eager young programmers and artists fresh out of college, work them 100 hours a week for weeks or months on end, then when the game is finished, they fire the lot of them and start it all over. I worked in the industry for years, and once I hit 45 I became completely unemployable, because companies refuse to pay the money that a senior programmer should make.

It is absolutely immoral what these companies do, but there are so many people eager to get into games that there is no real help for it.