I'm delighted to announce that my wife's first book, 'Scaling the Rim', has just become available on Amazon.com.  It's a novella, or short novel. 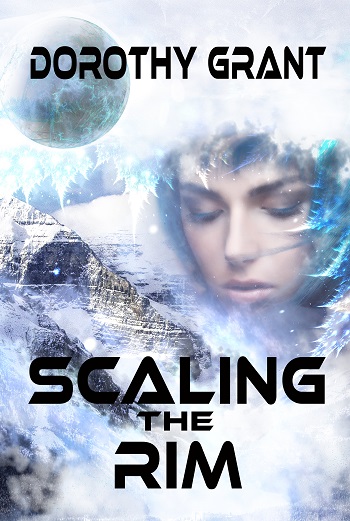 'Scaling the Rim' is presently available in e-book format, and will be joined by a paperback edition within a week or two.  We're finalizing the cover details right now, and will have it up as soon as possible.

When Annika Danilova arrived at the edge of the colony's crater to install a weather station, she knew the mission had been sabotaged from the start. The powers that be sent the wrong people, underequipped, and antagonized their supporting sometimes-allies. The mission was already slated for unmarked graves and an excuse for war...

But they hadn't counted on Annika allying with the support staff, or the sheer determination of their leader, Captain Restin, to accomplish the mission. Together, they will overcome killing weather above and traitors within to fight for the control of the planet itself.


As the blurb illustrates, 'Scaling the Rim' is a blend of science fiction, adventure, and romance.  The developing relationship between the two main protagonists is important, but it's never over-stated, and it occurs within the context of a group fighting for their lives against the forces of nature, in a science fiction colonization environment.  The adventure and SF components shape and form the relationship, and lend it added depth.  It's by no means your typical boy-meets-girl story, or the standard variations thereof.  Suffice it to say that I neither enjoy nor choose to read romance novels - but I enjoyed the heck out of this one.

To me, the book carries a personal touch.  One of the things I love about my wife is her sense of adventure - very down-to-earth, very understated, but very much present.  After all, how many ladies do you know who, for their engagement, would request a very low-cost ring, plus a set of spruce spars for the wings of the pre-World War II aircraft they were rebuilding?  And how many young wives do you know who would, shortly after their marriage, disappear for several months to finish rebuilding the aircraft, then fly it alone almost 4,000 miles from Alaska, all the way down the historic Northwest Staging Route at an agonizingly slow pre-World War II flight speed, to rejoin her husband?  I find that same sense of adventure in how she writes, and in the character of her female protagonist in this novel.  (Yes, I'm biased.  I love the lady.  What did you expect?)

This being Dorothy's first book, I'd be very grateful if you, my faithful readers, would please try it out, and leave reviews on Amazon.com to let her know how you found it.  'Scaling the Rim' is free to read for Kindle Unlimited subscribers, and only $2.99 to purchase, which I reckon is a real bargain.

Just bought it w/o even reading a sample because I'm certain it will be good.

Ordered. It's a rare pleasure to have met the authors of books, even before the writing began, and you two are some of my favorite people. :)

I'll get it in paperback form from amazon when it comes out. Thank goodness you can't be scolded for suggesting we avail ourselves of Mrs. Grant's new book - it's not making a debut at Nordstrom's. :)

Grabbed it from Kindle Unlimited, it is next on my to-read list.

Unfortunately it's in Amazon's captive KFX format, so I can't transfer it to Calibre to read it and it's useless (I refuse to read it in Kindle for PC). If Amazon keeps doing that, I'll give up on anything published by them.

Ok - had to regress to the last Kindle for PC version to get the file in AZW format. Amazon apparently is committed to closing all their formats so utilities like Calibre can't access them. Sheesh.

After the two of you are done prodding buttock to get the Lawdog's books out I'd love to see a collaboration between you two..

Finished the book last night, thought it was great as was the editing and proof-reading with one exception. This one bit:

"She picked up the noodles, and used them to pick up a helping of noodles."

I'm betting she picked up her chopsticks unless she had a couple raw, stiff noodles handy. :-)

Good story. I bought, and read, and will review in very near future.

Probably only the 3rd review I've ever given. Great read. Sorry, Peter, but she might have you beat!

@Tom: Don't be sorry. I love her book myself! I'm trying to persuade her to write more. (Hey, if she ends up making more money from writing than I do, that's fine with me. I'll simply let her keep me in a style to which I think I ought to be accustomed!)

I have been scouring the web for any kind of presence for Dorothy since I really enjoyed Scaling the Rim, and would like to read more from her. Loved the characters, setting and plot. I especially loved her becoming family to the Rus. Was a bit iffy on the representation of the "best friend is gay but not really a friend" trope, figured no balancing non-evil gay folks were most likely due to lack of room in a novella, not any kind of agenda.