A fascinating piece of firearms history


Readers may remember that, a couple of weeks ago, Miss D., Old NFO and myself went up to Amarillo in the Texas Panhandle, where we met Alma Boykin and spent a couple of days doing research for future books.  One of the places we visited was the Panhandle-Plains Historical Museum, which has an outstanding firearms collection.  Thanks to their generously cooperative curator, we were able to spend a couple of hours examining that part of their collection that isn't on display, which contains some real historical rarities.

I was fascinated by one example of Smith & Wesson's Model 3 revolver, which looked as if it had started life as a second variation Russian model.  These were ordered by the Russian government for its army, chambered for the .44 Russian cartridge, progenitor of the later .44 Special and .44 Magnum rounds.  Most were manufactured in 1873.  A limited number were sold on the US civilian market as well.  Here's what the original second variation Russian model looked like.  The picture is courtesy of Mr. G. W. Leiper, whose Web site 'Russian Revolvers' offers encyclopedic coverage of that very interesting subject.  Recommended reading for firearms enthusiasts.  (Click all images for a larger view.) 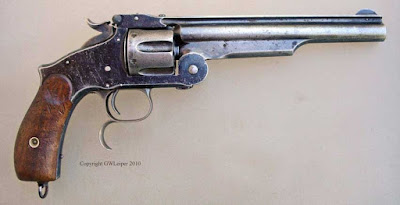 The revolver in the Panhandle-Plains Museum has been extensively modified from its original configuration.  I'll show it to you first, then discuss what's been done to it. 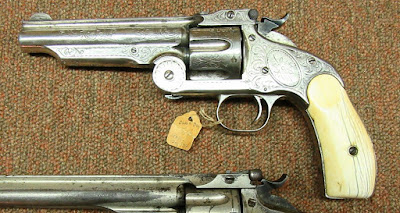 This must have been somebody's cherished possession, because the amount of work put into it far exceeds whatever its monetary value may have been.  For a start, the 'hump' on the backstrap of the grips has been ground or filed down until it's almost round, much like the original 'American' variant of the Model 3 (scroll down at the link for photographs) or the first variation Russian Model 3's.  The spur on the trigger guard has also been expertly removed.

Next, the six chambers and the barrel have been reamed out and filled with inserts in .22 caliber.  I suspect that the unknown gunsmith may have turned down on a lathe the outside of a .22 rifle barrel, cut lengths off it to suit, and then sleeved the original barrel and chambers with it.  The chambers would then have been bored out to take the rimfire cartridges, and a new extractor star fitted, to eject the much smaller rounds.  Here's the back of the cylinder, showing the sleeves.  (The white-gloved fingers holding the gun are mine!  Old NFO took the pictures, for which my grateful thanks.) 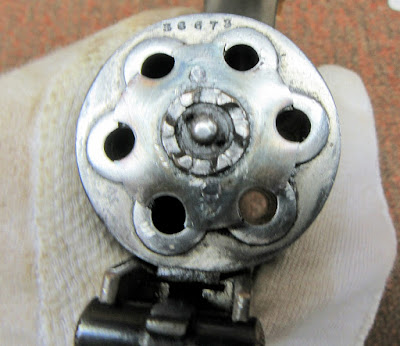 The barrel is only 5" long, down from the original 7".  This is often referred to as the "Wells Fargo conversion", as that company bought a large number of Smith & Wesson Model 3 revolvers from US Army surplus stocks (usually the later Schofield variation), and cut down the barrels to issue to its stagecoach drivers and guards.  There are a great many forgeries in circulation, probably more than there were original Wells Fargo conversions, making positive identification difficult.  This may not have been a Wells Fargo revolver at all, of course;  any gunsmith could have cut down the barrel, re-crowned it, and remounted the front sight.

The engraving covers the surface of the firearm, but it's not as even or as high-quality as factory-engraved guns I've seen.  I suspect that either a gunsmith or artisan added it later, or perhaps the owner of the gun tried to do it himself.  I suppose we'll never know.  At any rate, the gun has also been nickel-plated, common in the days of blackpowder rounds, as nickel resisted the corrosive powder salts better than blued steel.  I suspect this gun was not originally nickel-plated, because the plating has filled up the letters and engraving to a certain extent.

Another interesting modification is the repaired hammer.  At some point, I suspect the gun was dropped and the hammer spur broken off.  Someone has formed a new hammer spur out of a piece of steel, ground and/or filed to approximately the same pattern as a standard S&W Model 3, but not exactly identical, as one can see if one compares it to an original hammer.  A dovetail was then cut into the broken hammer, and the new spur inserted and (probably) pinned and soldered into place.  Here's a close-up photograph of the repair. 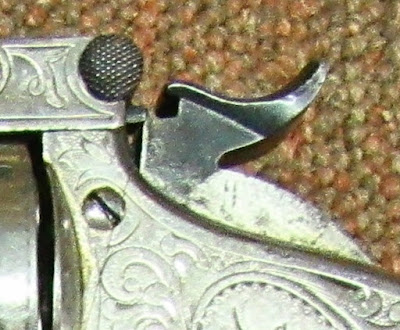 The repair must have been made after the gun was nickel-plated, because the replacement hammer spur is still in blued steel.

I can't help but wonder what was so special about this gun, to make someone spend a great deal of time, energy and money converting it like this, and preserving it.  Was it carried by an Old West lawman or outlaw, whose descendants wanted to hold on to the memories it carried for them?  Why would someone have gone to all the trouble and expense of sleeving the barrel and chambers for a different caliber, and engraving and plating the gun, and repairing the hammer, when the cost of those repairs and restorations would have paid for not just one, but several new guns?  Who did the work, and when, and where?

If only this gun could talk . . . I reckon it would have a lot of stories to tell!

The broken hammer supports the idea that it was used in a wild west type shoe. How many thousands of times the hammer was cocked or fanned for it to fatigue/break and need to be replaced.

Thanks for the posting. I love the Victorian elegance of the 19th century S&W revolvers. If you're ever up in Cody Wyoming, I highly recommend a visit to the Buffalo Bill Historical Center. Their gun collection is truly amazing and the rest of the museum is more than worthwhile. You can easily spend several days there.

Yes- Make Cody a destination! -The Cody Firearms museum has some of the very unique guns engraved by Raymond Wielgus- Try a search, they are something else- my favorite being the Lemat revolver he did. The Art Institute of Chicago has a bunch too, but I do not think they are on display. Wielgus was a noted collector of ethnographic art, engraving guns was a hobby .His style was unique, Art Deco inspired,completely different from the old leaves and scrolls.

There's a S&W Russian Model revolver in the Northfield, MN, Historical Museum.
It was used by a member of the James-Younger gang when they tried to rob
the bank in Northfield. Townspeople objected and the gang was driven off,
those who weren't killed in the street.

I really appreciate the detailed photos you posted for this article. The ground off hump on that S&W Third Model is a new mod for me. I can’t figure the rationale for it, but I do note that it first appears on the Second Model Russian and then the later New Model No. 3 had a much less pronounced hump than its immediate predecessors. Snipped barrels are fairly common, ranging from cut down Colt 1860s (both percussion and cartridge conversions) to much later guns. It was a good way to recycle clunky guns into something vaguely concealable or faster to draw. I’ve also seen a fair number of laboriously-modified large caliber revolvers made in to .22s. Apparently it was a trade-off to make a plinker rather than paying for a full-sized gun in .22, but then you’d pay the same price as the .44. This gun certainly tells a tale on the close inspection you provided.

Smith and Wesson certainly gets short shrift in historical westerns and film simply because of huge propaganda and advertising machine that Colt operated for decades in the 19th century. About the only big bore S&W folks can seem to name is the Schofield. Another point of interest is that the S&W American, which kicked off the whole series of No. 3s, came out in 1870, well before the SAA of Colt. Part and parcel to this was the litigious nature of S&W in protecting their purchased Rollin White Patent, which S&W had from 1857 to 1873. The patent actually dates from 1855, but S&W didn’t obtain it until later. Of course Colt itself defended its own master patent(s) vigorously from 1835 to 1851, but that’s another story.

The bottom line is there were a heck of a lot guns that were use in the Old West than just Colt products, as ubiquitous as they were. I note that many of the No. 3s also could come in .44 Henry rimfire chambering, making it a useful gun when used in combination with that venerable long gun. Anyway, I’m glad you gave us a peep an interesting artifact.