Today's award goes to an inept burglar in Tucson, Arizona.

According to a report, a locksmith was working at the school when he spotted a man trying to get into different rooms on the campus.

The locksmith spooked him, causing the alleged burglar to flee.

This is where the spiked fence comes in. He did not make the jump over the fence, and was caught hanging upside, underwear exposed and all. 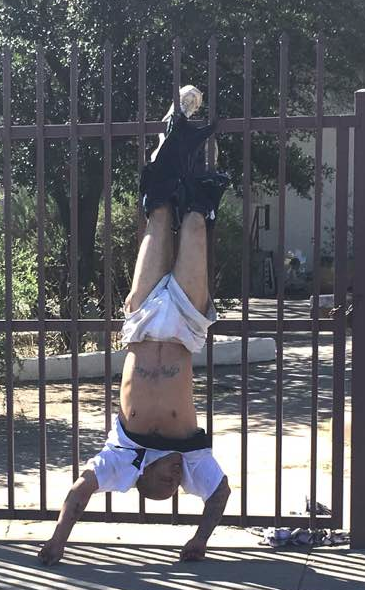 Passersby Jesse Sensibar and Kristin Woodall took a quick photo and posted the story to Facebook.

Sensibar explained he was thinking about going back and helping, but Tucson PD beat him to it.

And I'm sure the police had some pointed remarks for him, too . . .

Wonder if his mother is proud of the cleanliness of his drawers?

Should have used him as a punching bag.

Comes of wearing fashionably baggy pants, I suppose. I never pass some youth in full Gansta regalia without wondering how people contain the impulse to give the little idiot a life-changing wedgie.

I thought he was doing his dead Mussolini impression.

It looks more like an adult diaper to me...

No dripping blood, but I wouldn't be surprised if he got his bell rung from whacking that substantial gate after falling from the top.