About that Hawaii judgment against President Trump's executive order . . .


According to The Astute Bloggers, US District Court judge Derrick K. Watson had lunch on March 15th, in Hawaii, with former President Obama.  Their rendezvous was documented in a photograph on the restaurant's Facebook page. 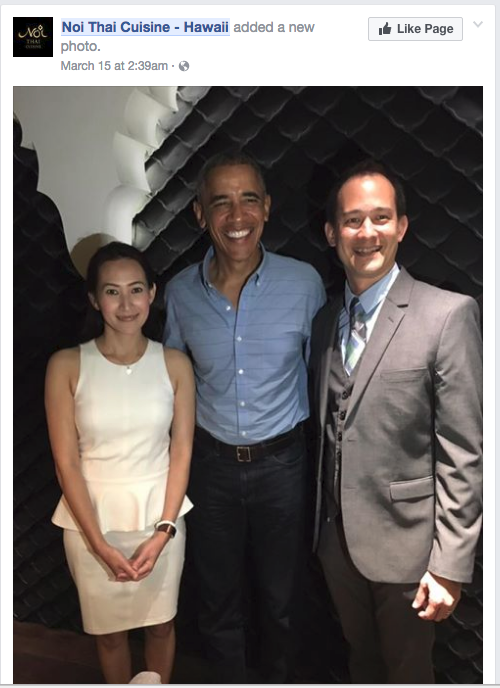 I'm not saying that former President Obama had anything to do with Judge Watson's ruling . . . but we can't rule that out, can we?  Their meeting appears to have been at least as ill-advised as the notorious encounter between former President Clinton and the Attorney-General last year, of which a CBS reporter said that "the appearance of impropriety is just stunning".

Under the circumstances, their lunch date was, at the very least, breathtakingly poor judgment on the part of both the former President and the Judge.  It certainly appears to contravene Hawaii's Revised Code of Judicial Conduct, and therefore calls into question the propriety of Judge Watson's ruling.  He should, at the very least, have recused himself from the case, in the light of his meeting with the former President.  At worst, the situation might even be construed as an impeachable offense by the judge.

Why has the mainstream media not picked up this story?

Because it involves Obama and the democrats...they are above all rules that apply to everyone else...

They have not picked it up because they long for the taste of chimp duck almost as much as "Judge" Watson.

The mainstream media *has* picked up on the story. They know what's going on, they just don't report it.

This interference in a sitting presidents policies by a former president is unprecedented in our history.

Yep, the mind doth boggle... And if they don't cover it, it never happened, right?

I am sure they only talked about their grandchildren. That was it. Nothing else. Really. No, I mean that. No big deal. Just a friendly chat between old buds. Nothing to see here. Move along. Move along.

As Iowahawk put it so well, the purpose of the commie met is is to cover the news. Cover it with a pillow and press down til it stops breathing.

Hmmmm. Not sure the guy in the picture is the judge. Unless judge has lost some hair since his photo was taken.
http://www.hid.uscourts.gov/dsp_bio.cfm?jid=10&PID=5&MID=103

While the judge's ruling was as clear an example of judicial error and overreach as I have ever seen displayed, I am not actually seeing how the judge meeting with Obama was violating the code of conduct. Obama is technically just another ordinary citizen now, and doesn't have any special legal standing with respect to this case. He's obviously pursuing a highly adversarial course of action with respect to Trump, but how is that different than the judge meeting with about 40% of the population of Hawaii who hold the same views?

But rules were written to be applied with discretion. i.e., only when they skewer Republicans. Jim Crow lives, just wearing a different hoodie these days.

While he might have lost some hair since el diablo's
photo from 2012, CNN's photo is from 4 days ago.

"Why has the mainstream media not picked up this story?"

Simple, the 'Lame-stream' media is the propaganda arm of Democratic Party like Pravda was for the Communist Party of the Soviet Union.

You probably know me said...

Both Watson and Robart should be told to pound sand. The constitution is pretty clear that POTUS has plenary power on who to admit to the country, so no one has standing to contest it.

Fair Witness Anne would say...."The house is white on THIS side". So FakeNooz? Probably high percentage likelihood of being FakeNooz, since the photo does not seem to me to be of the judge. But would anyone really be surprised if is just another bit of maskirovka floated for cover by Precedent Alinsky Jr? Jim Crow lives.

Given the parties involved - The house is white on THIS side. Maybe the NSA will leak the transcripts on this one. NOT!

The person pictured in the photo is the owner of the restaurant and his wife. Obama did NOT meet with the judge, the judge lives many miles from the restaurant, and, unfortunately, this is an example of fake news that is making the rounds on the right side of the aisle, proving that we are almost as likely to swallow stuff that meets our confirmation bias as the loons on the left are.

Peter, you need to put an update up. This is fake and has been thoroughly debunked.

Well, the 'story' about the photograph certainly seems to be in error. [aside:"News story"----contradiction in terms, aina?]
Nothing else is either supported nor debunked, except we know that at least one person somewhere either jumped to conclusions or was duped. Just snapping selfies with his fan club in the photo.

That is why planting this false description of an apparently innocent photograph would work so well as maskirovka, it plays into confirmation bias of both parties. Its da Wussiansz dat did it! lol

FWIW, I used to live 56 miles from my workplace, but made it to work and back home every day. I'll even wager pennies to nickels that the restaurant is 'many miles' from wherever Precedent Alinsky spent the night. But he was still able to get there to take selfies with the staff.

Definite item for Scott Adams though.

addendum: Noi Tai, Precedent Alinsky, and the US district court(Hawaii District) were all probably in Honolulu at the time of the photograph. So the original story is plausible enough to have been possible when 'many miles' approaches the number 10.

For all I know about his whereabouts, maybe the judge snapped the photo himself. lol. This version of pravda would surely appeal to the Alinskies, they could blow a gasket laughing for the rest of their lives.

Nope, 'many miles' seems to be just 3.6, not even 10. So I like the version where the judge actually takes the photo that 'debunks' his meeting with Mr. Alinsky Jr. It surely rolls right in to my own confirmation bias.