A very big ship, and a very big building


Here's a fascinating video for those who think that size matters more than almost everything else.  It shows a brand-new cruise ship, AIDAnova, emerging from her immense construction shed at the Meyer Werft shipyard in Papenburg, Germany.  The ship is the first of a new class of cruise liners fueled by liquid natural gas, rather than fuel oil or diesel.  She's being built for AIDA Cruises, the German arm of Carnival Corp., 'the world's largest travel leisure company'.

I suggest watching this in full-screen mode, and comparing the size of the ship to the people visible dockside and aboard the vessel.  She weighs over 180,000 tons, and can accommodate up to 6,600 passengers - a behemoth of her kind.

The size of the ship is all very well, but just look at the 'shed' (understatement!) in which she was built.  That's amazing!  The Meyer Werft 'Dockhalle No. 2' is listed as the sixth-largest building in the world by usable volume, with a floor area of 680,000 square feet (enough to accommodate well over 400 houses the size of mine on its floor!), and a volume of 167,000,000 cubic feet.  Here's an inside shot, showing another, equally large cruise ship under construction. 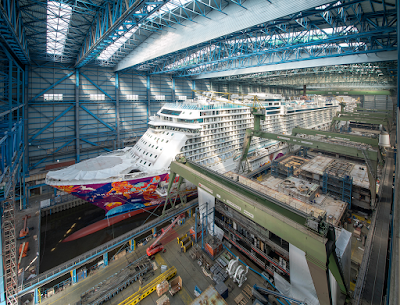 I suppose it makes economic and engineering sense to construct a ship like that under cover, so that wind and weather can't slow down operations, or damage furniture and fixtures being installed in the cabins;  but the sheer size of the building is daunting.  I wonder who thought up the concept, and decided to fund it?  It must have cost a not-so-small fortune to erect.

Here's another video of the float-out of the AIDAnova, this time focusing on the building and the activities rather than the ship herself.

It took a full day to get the ship out and into the holding dock, and make her fast to the quayside.  Here she is after it was all over, with the building in which she was constructed in front of her.

I'm unlikely to ever take a cruise - who wants to be shut up, crammed elbow-to-elbow with thousands of strangers, aboard something one can't easily escape in the event of trouble? - but the whole process of launching the AIDAnova looks to have been fascinating.  I'd have liked to have seen it for myself.

Labels: Boys and their toys, Business and Commerce, Cool, Ships, Technology, The Mind Boggles
Email ThisBlogThis!Share to TwitterShare to FacebookShare to Pinterest

Share your sentiments about the size of this ship, 6600 passengers plus how many crew? No thank you. A very interesting post, thanks.

I also have no interest in going on a cruise, but the size of this ship is impressive. Cruise ships do not have eye-pleasing lines; they are way too tall for the length. For that reason, they look unstable to me.

Like you say, Peter, the cost of the building must have been immense. The cost of a ship like this is also.
From https://www.bairdmaritime.com/work-boat-world/passenger-vessel-world/1719-aida-orders-third-helios-class-cruise-ship

In a €6 billion investment, Costa Group has a total of seven new ships on order by 2023: three for AIDA Cruises and four for Costa Cruises, to be built by Fincantieri shipyard in Italy, and Meyer Werft's shipyard in Turku, Finland, respectively.

And we have nothing in comparison. Sure, we've got one yard building nuclear-powered supercarriers, but US law has crippled our industry. If a high-cost country like Germany can build these, surely we could, too?

It's the first of three such planned ships, each longer and wider than a Nimitz-class aircraft carrier (minus the flight deck), and at 180K Tons, displacing nearly double what a Nimitz ship does, not surprising given the ten full-sized decks above the main deck.

They're so new to the world that the only full Wikipedia page on them is in German at this point.

However, the vessel is misnamed.

It should be called the S.S. Habitrail, as the largest and most densely populated hamster cage ever constructed by human hands.

God help them should there ever be a serious emergency or mechanical failure.

In 1975 my parents took me to Europe on the QE2. I’m glad to have done it at least once, and if you have the time it’s one hell of a lot more comfortable than going anywhere by air. A cruise is something else, though. I can think of one or two history-themed cruises I wouldn’t mind going on, but just to putz around someplace like the Caribbean? No thanks. My folks celebrated one anniversary with a Cruise of the Greek islands that had a bunch of Archaeological students on board for guides. I think a cruise of the Solomon Islands with some experts on WWII history would be pretty cool, or a run down the Mississippi with an emphasis on Grant’s Vickburg campaign.

Yup, of your opinion on cruises, I took one with my then In-laws up to Alaska on a cruise and being packed in with that many unknown people that could not have been more rude and deplorable. Never again would I take one unless I could rent the whole damn boat by myself.

The draft is more that of a barge, which probably means it's destined for calm waters. I can imagine rough seas, and the loss of power, would turn into a nightmare for passengers.

I spent 3 1/2 years on aircraft carrier, much rather be on one of these, but if I do any cruising it will be on a small ship.

"I'm unlikely to ever take a cruise - who wants to be shut up, crammed elbow-to-elbow with thousands of strangers, aboard something one can't easily escape in the event of trouble?"
That sounds an awful lot like my two Med cruises on the USS Forrestal!

Vacation cruising is something people either love or hate. Of course those subject to mal du mere need not apply.
The appeal for me is you board, unpack your stuff in the cabin, and never have to move it all again until the cruise ends. The small cabins are intended for sleeping, though I do recall one where the passengers on both sides must have been newlyweds.
The food is reasonably decent, though the efforts to simulate fine dining seem a bit contrived.
You do cover a lot of territory with some impressive views all while someone else does the driving.
For anyone considering trying a cruise I highly recommend taking one of the inexpensive three day excursions. If you find that you love the experience you can progress to the one to two week trips. If you hate it, well it's over in three days.

LNG? Seriously? And just where are the Germans getting LNG? Hmmmmm.

OK, I admit it. I went on a Caribbean cruise. Glad I had the experience, no real desire to go on another one. Our cruise ship was about half the displacement of this one and my biggest complaint was that it was too crowded for my taste. Also I like to explore on my own, not with canned tours. If you have the time, for travel from here to there, a liner/cruise ship beats air travel any day of the week, but for a cruise around the Caribbean, meh.

A small ship is infinitely preferable, but costs a lot more. :(

Picture this ship as an outpost for the uberclass when the apocalypse arrives. Just a couple of shakedown cruises till the vessel is needed.

The real fascinating thing about the shipyard? The water you see in the clip is not the sea, it is a river. The Ems, to be exact. So the third biggest ship building hall in the world, where one could build small super carriers if so needed is inland.

I'd take the carrier. At least THERE people know what they are doing... Total 'ship management' is only about 70 personnel, the rest of the 'crew' are to service the Pax...

Use your favorite search engine/map app to go to Papenburg, then switch to satellite mode and find the shipyard - and then figure out how they get from the 'pond' in front of the 'shed' onto the river and out to the sea ... the lock(s) don't look to be big enough to me, but I guess they are ... the scale of the endeavor is impressive

I did ONE trip as an evaluee mate on a cruise ship. Never, never again. I much prefer being poisoned by chemicals than constantly shoved by rude Germans and harassed by 600lb Americans demanding that I stop what I was doing and fix the free ice cream dispenser NOW!
There's a reason why cruise ships have crew-only decks and crew-only passageways.

As Urbane Legend notes, the ships ARE top-heavy, with a metacentric height that has to be offset by active stabilization. They have to be shallow draft to get into shallow ports. And packing in the passengers packs in the profits.

As Larry notes, US shipyards can't compete. The reasons aren't simple. We mostly build foreign and avoid cabotage laws (domestic port-to-domestic port regulations) because it's possible to make money without doing so. Shipyard tech in the US stagnated as a result, and shipfitters are by necessity master tradesmen, and can make money anywhere if shipfitting doesn't pay as well as their next best option. If you're a master ironworker, finish carpenter AND millwright, you can name your salary in the US, after all.
Bear in mind the relative strengths of American and EU economies. The captain of that Aida ship makes about the same salary as a deckhand on a tugboat in the US. My salary as mate evaluee on the cruise ship I was on worked out to about half of what the Steward Utility (cook's helper) on an American ship makes.


Things DO go wrong on a cruise ship. A lot. Disease is rampant. VD, norovirus, etc. Extreme dehydration via diarrhea is the #1 problem. Norovirus in other words. Sexual assault is also not unknown.

You can look up storm damage and panic-induced stampedes on video for cruise ships in rough seas. Weather that requires the steward to put cracker crumbs in the soup to prevent spillage on a merchant ship will send furniture flying on a cruise ship.

The Queen Mary II and new Queen Elizabeth are the only two ocean liners left. They are made for sea. Cruise ships are a different animal, made for port.

My wife and I have been on two cruises and enjoyed both. They were good for getting to know different locals in the Caribbean. Next time we go that far south we'll fly directly to one of the islands we liked and stay there.

One day I expect to see on the news that an unexpected high wind has hit one of these huge ships sideways and caused it to capsize. What CAN go wrong eventually WILL go wrong.

The cabins are prebuilt as modules, rolled in to place, bolted down and then have water/electrical connections made. When a cruise ship is refurbished, they unbolt them, roll them out and replace them with new modules. There are a couple of fascinating shows out there about this yard building Royal Caribbean's largest ships.