A couple of readers sent me a link to an article titled 'Occupations and Their Ideologies'.  It includes this interesting graphic, showing several occupations and how their occupants align politically.  (Clickit to biggit.) 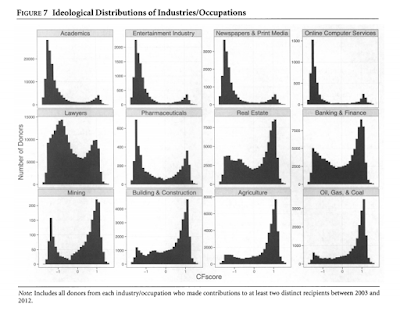 The author offers this explanation:

It's certainly food for thought.  Consider the current censorship of social media by the largely left-wing, progressive-oriented companies in the field such as Google, Twitter, Facebook, etc.  Their staff would overwhelmingly fit the self-perceived "high status" image, even though many of us might disagree with that.  They, on the other hand, would regard the "deplorables" as having "zero or negative status", and as such not worth worrying about.

The omission of the two professions I've held in my life - military and law enforcement - is interesting.

Both, from my experience, are very heavily conservative. As far as status goes, both are low status to the 'elites.' But to (law-abiding) working and middle class people, both are relatively high status occupstions.

I would posit that the professions/industries listed as more conservative tend to be grounded in reality, rather than emotion or fantasy. I note that Engineering is not listed, but in my personal observation, engineers as a group are quite conservative.

The original article is from 2010 and is here: https://ideologicalcartography.com/2010/02/27/which-industries-are-polarized-and-which-are-just-polarizing/

I can't spot the source of the graphs. Do you know it? Or is it Bonica's own research?

Also do note that the Y axes of the graphs are not normalised against each other.

I see the delineation as being along lines of money investment in material trades as opposed to theory or concepts. People who use money to make more money by investing in 'assets' that bear physical properties; a.k.a. materials over ideas.

As such, the right leaning group sees the value of a dollar in a personal way and they invest dollars carefully with high expectations of their returns based on careful planning and as small an amount of speculation as possible.

The left predominantly deals in concepts, manipulation of data, catering to the medical industry and arguing semantics. While both sides can be profitable, the latter or right wing group tends to be less volatile compared to the left as their strategies are based on factual calculations and not on the economy and its availability of excess funds.

In many ways, this is an explanation of human nature. We have our calculated side with budgets and planning and then we have our whimsical side where we use conjecture and express our opinions. Our world reflects our realities and this is not surprising. The difference among people is which side they place their trust and hopes.

i notice that if the leftists disappeared nothing much would change, except we'd all get a rest from their constant yelling and screaming.
if the rightists disappeared there would be no industry, no sewerage treatment, water or electricity service, or food. the list of necessities goes on and on.
if the left had to live without us conservatives they wouldn't live. they would starve to death.