Today's award goes to a visually (and possibly intellectually) challenged anti-gunner.  A tip o' the hat to Miguel at Gun Free Zone for spotting it first.

Rob Clewley was outraged to come across a picture of the latest assault weapon, and posted his reaction on Twitter. (Click the image for a larger view.) 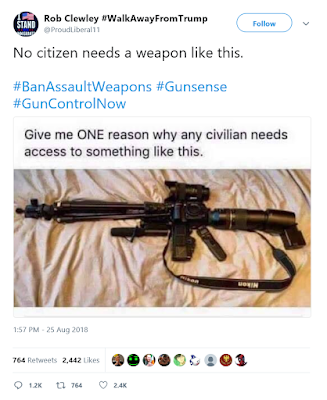 Unfortunately for Mr. Clueless, he'd been trolled.  As Aesop gleefully points out, that picture shows "a tripod, two camera bodies, three zoom lenses, a remote shutter release, a microphone, a battery pack, and a camera neck strap".  If you don't believe it, enlarge the picture and count them for yourself.

That's an epic trolling move by whoever composed the image . . . and Mr. Clueless fell for it hook, line and sinker.  Talk about a classic knee-jerk response!

To paraphrase John Donne:  "Send not to know for whom the image trolls.  It trolls for thee."

That is almost on the level of the whole 'Shoulder Thing That Goes Up' hilarity a few years ago.

I saw immediately it was a collection of camera equipment. Doesn't the
" Nikon " on the strap give it away?

OTOH, most photography is done with cell phones these days. Perhaps Mr. clueless has never seen a camera.

He is technically correct, while being hilariously wrong. Nobody needs a "weapon" like this. Mostly because it's not a weapon.

Look at the number of 'likes' & 'retweets'. It doesn't matter if it's nonsense, if they are believing it.
They have no real interest in facts anyway, it's about perception & control.