A tactical thought about the US Army's next-generation helicopters


As many readers know, I'm a veteran of military service.  I've traveled in military helicopters, including high-speed insertions into "hot" landing zones.  I therefore have a "grunt's eye view" of the use of helicopters when things get hairy.

Consider the size of many helicopter landing zones.  Some of them are open spaces, which offer room for aircraft to maneuver, such as this one:

Others, however, can be cramped, and dangerous to the helicopters because of encroaching tree branches, rocks, and other obstacles - and, in urban LZ's, buildings, electrical wires and other man-made hazards.  Here's an example of a confined area landing in a forested environment.

Nicely done by that pilot . . . but a bit hair-raising, nonetheless.  It can get even worse than that, as combat experience has shown all too clearly.

I can recall with unpleasant clarity sitting in a South African Air Force Puma helicopter, flying low-level in the operational area, watching tree tops go past above my head, almost within touching distance, as the pilot flew down a narrow road cut through the bush.  His fuselage was between the trees and bushes, with his rotor above them, as he tried to stay as low as possible to avoid possible shoulder-fired ground-to-air missiles.  One miscalculation and we'd have crashed.  Not a happy experience, that.  I would call it a "brown-trouser moment", except that our uniform trousers were brown anyway!

Now, look at this video of Bell's V-280 Valor technology demonstrator for the US Army's Future Vertical Lift (FVL) program.  It's a tilt-rotor design, as you can see from the video clip.

The aircraft's performance is claimed to be "next-generation".  Bell boasts that it has "Twice the speed, twice the range of current helicopters".  That's great . . . but what about its tactical utility?  Consider its effective span, from the outer tip of one rotor to the outer tip of the other.  Bell doesn't give specific figures in its publicity material, but it does supply this graphic: 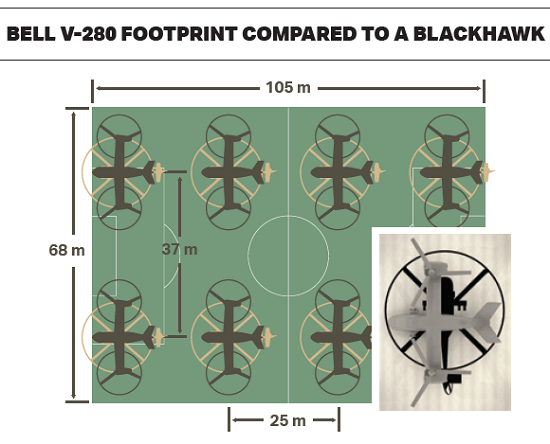 Note two things.  The first is that the V-280 wing is superimposed on the Blackhawk fuselage.  They aren't facing in the same direction.  That's a critical issue if we're talking about a tight LZ.  How will the pilot fly into a narrow LZ - sideways?  I doubt it!  Also, how will he or the crew see the ends of the rotors, and their separation distance from potential hazards, if they're that much further away from them?  The second point is that the V-280's rotors aren't shown at full extension, with the outer blade in line with the wing.  That's a bit of a cheat, and tends to make the comparison look more favorable to the V-280.  I'd want to see the exact dimensions, but already I'm willing to bet they won't look good for the V-280.

When you consider safe separation distances in a landing zone, combined with the probability of having to perform insertions and extractions in confined terrain (natural or man-made - i.e. urban), I'm not at all sure how well the V-280 design will perform, simply because it's so big.  It may be forced to land and take off in more open spaces, further away from the action.  That will force troops to march further to where they're needed, or fight their way back to their helicopters for extraction.  That'll add time and, probably, casualties to the operation - and that can't be a good thing.

(If it comes to that, the pilot couldn't fly a V-280 down a narrow bush road, as that SAAF pilot did his Puma.  The wing would hit the trees on either side, even if the rotors didn't.  That's another potentially vital consideration.)

Sikorsky-Boeing's SB-1 Defiant proposal for the FVL program, on the other hand, has a similar footprint to conventional helicopters, despite being much faster.  It's not flying yet, but here's a promotional video from Sikorsky-Boeing, showing what it will look like.  Note that they're showing it operating in a confined urban environment - perhaps deliberately, to emphasize that it'll be compact enough to be able to work there.

A smaller scout and attack helicopter design, the S-97 Raider, is already flying in prototype form to prove the technology involved.

From a purely tactical perspective, looking at the likely size of available landing zones, and the ability to set down and lift off as close as possible to the fight, I'd say the Sikorsky-Boeing SB-1 concept is going to be a lot more flexible than the Bell V-280.  I'm not knocking the latter's capabilities, of course;  I'm sure it'll be a very good aircraft . . . but that's not necessarily the only consideration.  From a combat utility standpoint, I think its sheer size will impose limitations.

What say the combat veterans among my readers?

Not related to size, but videos of the failure modes of rotorcraft rotors is that tail rotors and single rotor failures of vertically stacked main rotors fail controllably. Multiple main rotors that are separated across the craft - such as the Osprey and the Chinook - have a failure mode better described as 'catastrophic loss of control followed by unsurvivable crash.' The Osprey has gotten much better, but if these were approaching an LZ I had under observation, I'd have my MG crew dump a full belt into that nice exposed area where the gearbox rotates up, with all the delicate exposed machinery.

Peter, please look at the diagram again. The size of the circle which shows the area of each rotor is not dependent on where the individual blades are at any given moment. The radius stays the same as the blades turn. So the diagram is not "cheating".
But I agree completely with you about the benefits of small rotor size.

The whole focus of these tilt-rotor aircraft is to enable a twin turboprop aircraft to hover at it's destination. At some point not too many years ago, they walked away from trying to make helicopters fly faster. They had one design with a different swash plate design that was significantly faster than any other chopper, but I suspect that political shenanigans killed it.
These current tilt-rotor systems are ridiculous for tactical situations, but money talks. This newer version is just more of the "me-too" mode of thinking.

Can't fault any of your comments. On the other hand I'd say there's a little bit of apples and oranges there. The V22 is more nearly comparable to a Chinook including sling loading.

Mostly, I'd generalize to the notion of horses for courses bearing in mind Dr. Pournelle's (et al) on the strategy of technology combined with a tendency to justify the expense by calling a master of one thing a jack of all trades. See also F35 vs. A10 or the TFX controversy where the FB111 turned out to be really good for Australia because the airframe had enough mass to fly fast and low and absorb a little heat for longer range maritime patrol work. For others not so great on cost benefit.

Honestly, the optimum solution would probably be some mix of both types. The tilt-rotor will probably give you better range (this is the real reason the Marines like them - longer range means they can keep their amphibious ships further offshore, and thus further away from unfriendly anti-ship missiles.) For the Army, longer range means they can use airmobile units for deeper vertical insertions without having to resort to using paratroops. (This also makes the AF happy, because it helps keep their valuable cargo planes from having to overfly enemy air defenses.) Also expends the possible insertion distance for LRRPs/deep recon and SOF elements.

The CACR-compound helicopter will probably perform better within the traditional flight envelope of helicopters - especially hovering and maneuvering in directions other than forward. And, as Peter has pointed out, fitting into tight LZs.

So, ideally, purchase some mix of both. Let the rotorheads and their living cargo figure out the exact mix.

The problem is, the budget probably only supports one type. (Although the 160th SOAR might well buy some of both, especially if the development costs for whichever one loses on the Big Army side can be absorbed at least partially by civilian sales.)

I remember flying in helos in Egypt a long time ago. The Marines I was with point blank refused to fly in ch 46 or kamman coffins. We probably lost more Marines to crappy helos than were killed in Vietnam.

Twin-tilt rotor has multiple points of failure, and is remarkably prone to catastrophic damage by AA gun fire.

For an assault into a potentially hot LZ, I have read comments by combat vet helo pilots about the limitations of the V-22 getting in quickly compared to Hueys or Blackhawks. It seems tiltrotors can arrive quickly, but transitioning, slowing down and descending is markedly inferior, and that is precisely the moments of greatest danger from groundfire. I'm not sure how much weight to put on that, but it seems plausible based on video I've seen.

Leaving the LZ doesn't seem to be an issue, just making the fastest possible landing.

Not only are these more delicate (sensitive to damage), but for the same size fuselage, they have a lot more surface area (wings and pods) for targeting purposes. They make no sense for hot LZ's.

If my ground forces were going to be countered by troops using these things, I would have the armament design people work on developing a hand launched/ground mounted short range engine tracking missile to kill these things in the hover mode.

In brutal honesty, I don't think that the air assault technique is going to be viable in the not-so-far-off future.

Proliferation of drone technology is going to be what does the whole thing in, and it's gonna be ugly for the ninnyhammers who think it still works. That incident in Iraq, during the closing phase of the war, where we lost nearly a brigade of Army attack aviation? That's going to happen, again and again, but on a nastier scale.

I want you to think carefully, about this: What, pray tell, happens when one of those expensive aviation assets sucks a drone into an engine? What happens when the insurgents weaponize the damn things, adding improvised explosives to the payload? Hell, tell me what happens when they use 'em to drape wires over the LZ as you're going in to land...?

War is going to change, massively. Much of the technology we have is going to have to adapt, and the sad fact is, I really don't see us being able to come up with the equivalent of an MRAP helicopter or tilt-wing. Things flying in the air are expensive as f**k to armor, and the armor doesn't do a lot to ensure survivability.

My guess is that the future is going to be missing a bunch of "knights of the sky" BS, until anti-gravity and energy weapons show up that can erase the inherent issues of dealing with hordes of cheap flying drones and being able to withstand close-in blast effect.

I can only imagine what the VC would have done with cheap drones, when it came to interdicting LZs out in the jungle. Hell, as is? They damn near put a stop to a couple of operations with just those damn MON-300 mines they were starting to play with...

The technology to engage helicopters or any aircraft inside say 3,000 meters has existed for about 40 years. The Muj were smoking Russian helos with stingers in the 80’s.

Pros and cons vs our current inventory. I suppose the powers that be want range and speed more than a slightly smaller landing area.

I don’t think we have done that sort of large air assault in confined areas since ‘Nam.