Today's award goes to the pilot of a Airbus A330 airliner of Thai Airways.  It clipped a Gulfstream IV corporate aircraft with its wing at the airport in Vientiane, Laos the other day.  The results were catastrophic for the smaller plane.

The much larger airliner suffered only minor damage to its wing, and will be repaired before resuming scheduled flights;  but with damage like that, I daresay the Gulfstream is a write-off.  It certainly can't be flown anywhere for repairs, and I doubt that a minor third-world airport can handle what's needed, even if parts and equipment were flown in. 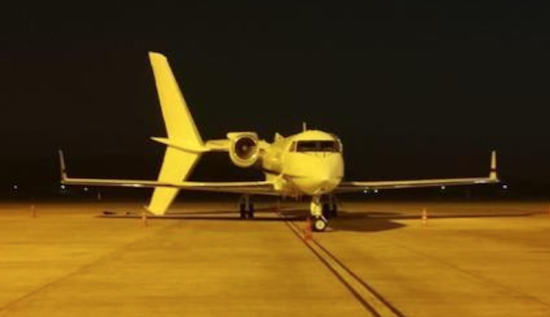 Used Gulfstream IV aircraft appear to be priced in the low millions of dollars, so Thai Airways' insurance company is probably going to be writing a large check to the owners of the smaller plane.  One wonders what that'll do to the errant pilot's future employment prospects . . .

Yep, that's gonna be a strike. The only option would be disassembly and return to SAV for a complete rebuild, which isn't going to happen. They'll salvage parts and it will come to a sad end, sitting off in the corner of a ramp somewhere.

I'd be worried about what long-term damage the Airbus suffered in the composite wing construction they use. With composites, little things add up quickly to a failure in ways not as easily seen in an all-metal structure.

Seriously, micro-stress fractures can flex and shatter quietly until the whole piece goes.

Surprised they didn't ground the AB until a certified inspection crew came. But then again, Airbus has never seen an issue with their composites failing...

If the owners want to spend the money, they could have the plane flown in a AN124 or something like that and drop it off at a GulfStream recognized MRO and have the repairs done. or fly a team down there with new parts equipment and after getting it repaired, get a ferry permit from the FAA and fly the plane to a major MRO for permanent repairs.

Are you trying to say there's some things you can't fix with duct tape and bailing wire?

We don't need that kind of negativity 'round here!

@beans - A330 have a traditional wing construction .. aluminium, not composites - so the repair job should be quite straight forward

the referenced article says nothing on whiose fault this was . if the A330 was following the marked taxiway it should not have been able to touch the gulfstrams tail with its wing .. might it be possible that a marshaller goofed and put the gulfstream into the wrong place?