Saturday Snippet: Surfboarding down to Mars

John Varley is a well-known science fiction author, with many books to his credit.  I like the way he uses his imagination to conjure up scenarios for his novels.  In "Red Lightning", second in the four-volume "The Thunder and Lightning" series, he has his teenaged protagonist surfing the atmosphere of Mars (such as it is) on his way from one of the planet's moons, Phobos, to his home below. 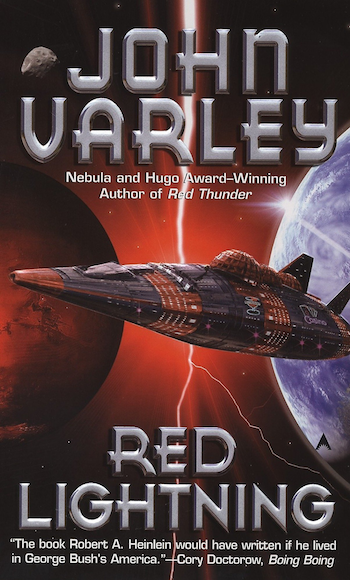 Here's how it goes.

No question about it, one of the things that doesn’t suck about Mars is airboards. And it may be the one thing Earthie kids my age envy us. You can’t use them on Earth—please!—and to use one on Mars you have to be a Martian. In fact, if a lot of Martian parents had their way, nobody would be able to use them at all. Hence the computer beeping at me, and less obvious safety measures.

We call them boards to be cool, to fit in with surfboards, which we obviously can’t use on Mars, and skateboards, which we can and do use, and are able to do tricks nobody could even think of on Earth.

What they actually look like is a snowmobile or a Jet Ski, sitting on a longer, wider surfboard. You straddle the engine and air tanks, sitting on a motorcycle seat, and there’s a clear Nomex aerodynamic shield in front of you, but other than that, you’re in open space, nothing but your suit to protect you from vacuum.

I fired the jets for the last time as I felt the very thin atmosphere begin to tug slightly on my board. Below me, Mars was spread out like a giant plate of lasagna. Sorry, but that’s really the best analogy I can come up with. Orange tomato sauce and cream-colored pasta, with a few smears of black olive here and there. The only things that didn’t fit the picture were the single, monumental peak of Olympus Mons and the perfect row of Ascraeus, Pavonis, and Arsia Mons east of the big boy. All four gigantic extinct volcanoes showed white caps of frozen water and carbon-dioxide ice.

I checked all my helmet displays, and everything was co-pacetic. Airboarding is fun, but you don’t want to forget that you can reach some serious high temperatures on the way in, and that you’ve got a reentry footprint you don’t dare ignore. Too high and you’re okay, you’ll skip out and have to try it again, a long way from your target, and endure the merciless ridicule of all the people you know when you get down. Too low, and you can toe right into the soup, decelerate at a killing rate, and fry. Falling off your board on Mars is not an option.

You do have to do a little skipping, but the best way to kill your velocity is slaloming. You have handlebars on the front, and of course you’re strapped down tight, so you hang on and shift your body left and right, maybe hang five, which means putting one foot out into the airstream for a few moments. Wear your heavy boots for that one.

I swooshed left, toward Olympus, traveled for a while almost parallel to the triple peaks, which might have been put there by the god Ares as a flight path indicator. When you get over Pavonis, it’s time to jog right again.

The gee forces were building up, shoving me down into the seat, and a faint ghost of a shock wave was curling over the top of the windshield and buffeting my helmet. That air was cold when it hit the windshield, and pretty hot when it left. The clear material began to glow light pink.

I was getting to the hottest part of the trip, pulling about a gee, which was easy. I dug a little deeper into the air and pulled a bit more. Then I started getting a little blue color in the air. That was a very tiny bit of the ablative coating of the board bottom burning off. About every fifth or sixth trip you had to spray some more on it, sort of like recapping a bald tire on Earth. But you could mix in some chemical compounds that didn’t have anything to do with slowing you down, like strontium or lithium salts for red, barium chloride for green, strontium and copper for purple, magnesium or aluminum for intense white. Same stuff you use in fireworks. Not a lot of it, and the resulting firetail is not as spectacular as a Landing Day display, but it’ll do.

If you’ve got bubble-drive power, you can theoretically start off at any time of day for any destination, and the same on your return. But it can take a long time, even accelerating all the way. The most practical thing is to take off for Phobos during a launch window that lasts about an hour, and when you return there’s an ideal time to leave to get to Thunder City—which is just about the only place worth going on Mars.

That means that a lot of people were reentering at the same time I was. Off to each side of me I could see multicolored flame trails as other boarders showed their stuff. As usual, there were varying degrees of skill. I watched as much as I could while still keeping my eyes on all the telltales and keeping my feel for the board. To my left I saw a board getting a little too close. I saw on the display that I was about half a mile ahead of him, which by the rules of the air gave me the right of way. He kept coming, and I got a yellow light on the heads-up. Jerk. I punched the console and a yellow flare arched out in his direction. In about a second he saw it and banked away from me. A window popped up on my display and I saw a kid about fifteen years old, his face distorted by the gee forces he was pulling.

“Stay cool,” I said, which he could take any way he wanted.

Below, about fifteen thousand feet, I saw Thunder City, and I banked again and went into a long, altitude-killing turn. Looking out to the side, I got a wonderful view of what had been my hometown since I was five.

My, how it had grown.

When my family arrived the first hotel on the planet, the Marineris Hyatt, which my father was to manage, was still under construction. People were still new at this, at constructing buildings in an environment as hostile as Mars. The hotel was finished almost a year behind schedule. But it was full on opening day, and Earthies were clamoring for more rooms. So we built them.

Now you could hardly find the original Hyatt, which had come within a hair of being torn down before my mother and some others led a campaign to save it as our first historical building. It was converted into our first, and so far only, museum. Next to it was the Red Thunder, which Dad now ran, and where I had lived for the last five years. It was still the tallest and most impressive freestanding building in Thunder City, but wouldn’t be for long. I could see three new hotels in the works, all of which would be bigger.

The city was built in an irregular line, which had grown to about seven miles. There were a lot of domes, both geodesic and inflatable, the biggest being a Bucky dome almost a mile in diameter. It was all connected by the Grand Concourse, of which an architectural critic had said, “It represents the apotheosis of the turn-of-the-century airport waiting room.” Yeah, well. We can’t have open-air promenades with old elm trees on Mars. So most of the trees on the concourse are concrete, with plastic leaves. It’s all roofed with clear Lexan, and maybe it’s tacky, and maybe it is nothing but a giant shopping mall, but it’s home to me.

The slightly zigzag line of the concourse pointed toward the Valles Marineris, five miles away. There was one hotel out there, on the edge, and I swung over the Valles as I deployed my composite fabric wings to complete my deceleration. Like the old Space Shuttle, the board wasn’t capable of anything but a downward glide with those wings, but if you were good and had a head wind and maybe a thermal, you could stretch that glide pretty far. I went out over the edges of the Valles, which is just a fancy word for canyon. The Grand Canyon of Mars, so big that it would stretch from New York City to Los Angeles. You could lose whole states in some of the side canyons. I felt a little lift from the rising, thin, warm air. When I say warm, I mean a few degrees below zero. That’s balmy on Mars. But I didn’t linger. I banked again and soon was down to three thousand feet over my hometown.

I'd never have thought of combining a surfboard with atmospheric re-entry, but I suppose it's logical, if you think of "conventional" re-entry maneuvers currently used by spacecraft.  They don't so much "surf" as skip off the upper edge of the atmosphere to lose velocity (or accomplish the same thing by firing retro-rockets) before slanting down on a long, angled re-entry trajectory.

"combining a surfboard with atmospheric re-entry"
The movie Dark Star comes to mind. I think. Been quite some time since I saw it.

Beat me to it: https://youtu.be/HzAUcvmIMfk. Classic stuff, and a great if brief ride.

That is some very creative and innovative writing. Thank you for sharing.