I've written often about preparing for emergencies, and more recently about the threat of inflation.  In both cases, one of the generally recommended solutions is to build up a reserve supply of foods that you eat regularly, so that if the supply is interrupted, or prices get too high to be affordable, you have something to fall back on.  To that end, canned foods are a vital part of emergency preparedness.

For years I've used the cardboard CanOrganizer storage units.  I reviewed them back in 2013.  Sadly, it looks like the company making them is no more - at least, its Web site is defunct.  That's a real pity, because they made a very useful product.  However, in searching for alternative can organizer tools to expand our pantry storage, I came across the Cansolidator series from Shelf Reliance.

They work on exactly the same principle as the CanOrganizer:  you put new cans in on the upper level, and they roll down an inclined ramp, fall down to the lower level, and roll back to the front, where you take them out as needed.  In this way, you're constantly rotating the cans, using the oldest first.

I particularly like the adjustable-width Cansolidator segments.  They can be tailored to the size of the cans they contain, so that no space is wasted. 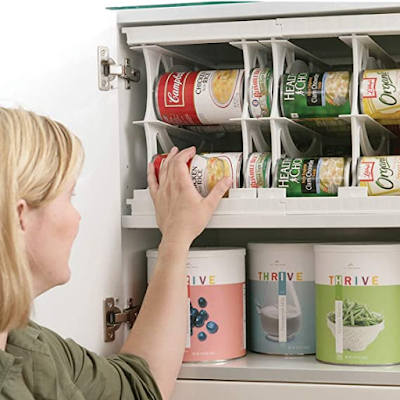 They snap together very easily (a rubber hammer comes in handy to make sure the tabs are properly seated in the notches), and are stronger than the cardboard CanOrganizer.  I've chosen to build mine in 20"-long units, rather than longer ones, because if I ever have to move them, the extra length and weight would make them unwieldy.

The only complaint I have about the Cansolidator is that it can hold a maximum of ten normal-size cans per segment (slightly more of smaller cans like Campbell's soup, or tomato paste, or whatever).  The cardboard CanOrganizer came in four different sizes, so if you needed a lot of cans of one particular food, you could choose a longer, higher-capacity storage unit for them, and pick a shorter, smaller one for other foods.  The Cansolidator is equivalent to the medium-size CanOrganizer, but offers only the one size.  However, I suppose you can use two segments, side-by-side, if you want to store more than 10 cans of something.  So far, I'm reserving the Cansolidator for foods where I stock fewer cans, and using the longer CanOrganizers for foods more in demand.

I'm not being compensated in any way for recommending the Cansolidator;  in fact, the makers have never heard of me and don't know I'm writing this review.  Nevertheless, it's an outstandingly useful product, easy to assemble, tough enough for all normal use, and very versatile - much more so than wire-shelf products I've tried, which were mostly somewhat unstable when fully loaded.  I've bought two of the six-segment, 60-can-capacity Pantry Plus Cansolidators (as illustrated in the first photograph above), and assembled them into three shorter, 4-segment units (they're very flexible that way).  I'll be buying more if needed.  I highly recommend them if you're looking for a way to organize and/or expand your reserve food storage - something I suggest we should all be doing, what with the hard times that so clearly lie ahead.

Frustrating that they mostly seem to be available through Amazon in this country. I am trying my best to reduce Lord Bezos' fortunes. Walmart lists them on their website (not much better but at least there's a store nearby where one can go buy stuff) but the price is 50% higher ($60 vs $40 for the 40 can rack). I put together the wire racking and I love it for my pantry as it's so much more solid than what I have, but it is a hassle getting at cans in the back of the rack.

Also worth noting that this idea has been around for decades. I had one in a fridge for storing soda cans at least thirty years ago. I think our grocery store might have soup in this kind of rack on their shelves also.

Took me about 2 hours of my time and some scrap wood lying around to make sets for our cans.

Same principle, just made to fit the space I had free.

Have a couple pictures, but no clue how to add them here.

I haven't used Shelf Reliance's can organizers, but I can attest to their Thrive food line being exceptionally good, and, based on what I have used of it, in my opinion is the best on the market for quality. They used to have a food storage budget planner on their web site that would calculate out your monthly purchases to build up a year or more supply of food for however many people you specified based on the amount of money you could set aside in your budget. Not sure if that is still available or not, but it was a very handy tool.

Like Charlie said, it's not hard to do it yourself. A quick search came up with several photos to give you some good ideas.

Well, for me, the best shelf organizer is a Sharpie.

Write a clearly large purchase or use-by date on it, and then cram the shelves full of whatever.

I live in a small apartment and space is critical. Those things take up too much space.

Another thing. For those who think off-site storage like at a storage place? Check to see what their policy is on closing during natural disasters, and what your county/city's policies are. Last hurricane scare, the feckless socialist leftist bastids who run the local area shut down all the self-storage locations by decree a day before we supposedly would be hit. And thus, many people, me included, got locked out of our off-site preps.

Things to think about...

For that price, I can do it the manual way. Plus I get more efficient use of my shelf space.

We have them in the basement to help organize our ready reserve. Very handy.

We got them when my wife was the point person in purchasing emergency supplies for about 25 families. Once a month she'd find the deal from among half a dozen vendors, collect the orders (prepaid), and distribute the goods. This went on for three or four years. Thrive was nice because they gave bonus cans once the order got big enough. Those she kept.

Stuff was cheaper ten years ago when this was happening but $25-100 or so a month adds up after awhile. Our basement will be very popular with the grasshoppers if they ever find out what's there. She even sourced canned butter from New Zealand.

Here in Canuckistan the unit is over $100 (CAD). Mind you it would help out and with the current price of lumber probably cheaper...

Ah! These may help with the pantry in the apartment. I'm struggling with the move from big farmhouse kitchen and pantry to itty-bitty-kitchen and tall cupboard pantry.

When it became time to switch between STORING food, and USING it in March of last year, I finally bought some of these FIFO can organizers.

I liked them and immediately bought more.

Having used them for a year, I bought another two sets, more for continuity than because they were a great product.

My issues, which are not deal breakers, just annoyances.

--they are sagging a bit, so cans don't roll smoothly. I end up 'bopping' the last can with my fist to move them all down the ramp.

--they do have variable spacing, but I didn't find it useful.

-- they don't fill the full depth of my shelves. I have stacked cans of meat- mainly chicken, behind them to use the space, that I access from the end of the shelving unit.

--once you get used to having each type of food in a slot, you'll want all your cans in slots

--your cans are FIFO so you can rotate stock automatically.
--what you have available is readily visible
--even my wife (reluctant prepper) and kids have no trouble going out and getting a can or two for dinner, when they wouldn't do it if they had to hunt thru the stacks on shelves
--I've got three shelves, each with three feet of organizer and that's pretty comprehensive for that I need "ready to use".


I've got other stacks of stuff stored very compactly elsewhere, but again, USING vs STORING, some sort of FIFO system is very handy.