I was dumbfounded (and that may be a very good word under the circumstances) to see this tweet put out yesterday by the US Consumer Product Safety Commission: 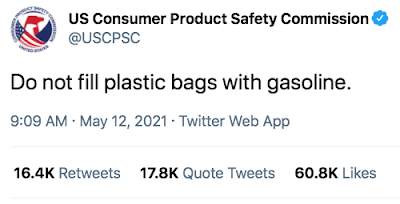 I could hardly believe my eyes.  Is it even possible that educated First World residents can be so stupid as to do something like that, and therefore need to be warned against it?

That was before I saw these photographs, among others (also yesterday): 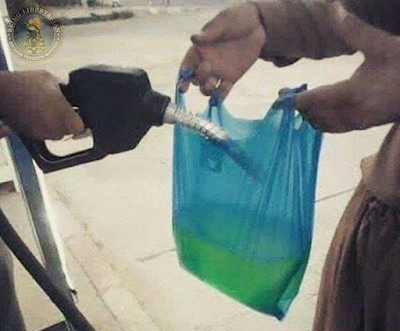 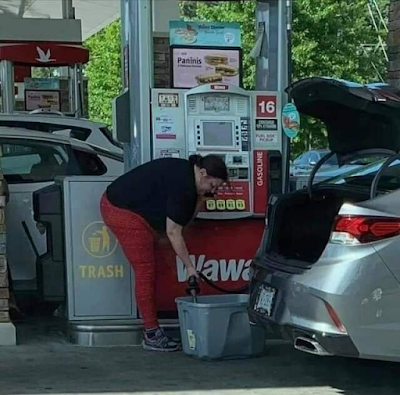 It seems the USCPSC understands (some) Americans better than I do . . .

Those aren't the only images of the current East Coast gas shortage to boggle my mind.  I saw photographs and reports of:

I wonder how many people will be killed by such stupidity before the current gasoline crisis is over?

Hi Peter,
It was announced on the hourly news on our radio, "Do not fill plastic bags with gasoline, and put them in the trunk of your car." So apparently it widespread enough that it becomes a PSA to tell people "what not to do."

I heard that and was thinking, how do they expect the gasoline to not spill out of the bag the moment it was set down in the trunk, and also, what about the fire hazard when it then does. Not to mention the fumes that will go thru the car if it doesn't ignite.

Steve Sky,
Not any of Peter's readers, of course, but in general America now needs this on a t-shirt:

Thinking: it's not what we do anymore.

This is a self-correcting problem. AS the solution works its way through the population, the average IQ will increase.

Long argument on the radio yesterday over the correct answer to 8/2(2+2). Apparently it's a tweet going around and the idiot gal who brought it up was convinced that it was a generational thing, that the kids were being taught math differently and that's why there were two different answers. I had to walk away from the radio.

For the record, the correct answer is 16 and it doesn't matter what strategy you choose, so long as you do it correctly. The other popular answer was 1.

People are getting stupider (and this wasn't even in the US, it was in the Great White North).

how many will die? hopefully all of them. the gene pool needs cleaning.

BRM, I did see this article - and with you, looked on in disbelief. This is not the first round of "basis sensible things one should not do" that I feel like we have seen in the past few years (Tide pods come to mind, of course), but it is indicative of a complete loss of the ability to think critically and logically (and, in this case, not read the sign at the pump that clearly says "Approved Fuel Containers only".

A couple of causes I think: A view of the world informed largely by media (where everything works - trust me, if this was a MacGyver episode, there would have been on problem here); a government that has failed to get out in front of these issues (especially now); and people who, having become used to living in fear of the next inability to get out or get something, over-react.

I am not hopeful for the future.

Sad thing is, there wasn't a "crisis" until the panic-buyers created one.

Wait until a year or so from now when there's food shortages. Whoa, Nellie!

We appear to be in the process of 'culling the heard'. . .

Yeah, heresolong, part of the math riddle depends upon the formatting. As you wrote it - parathenese first for "4" then multiply that to the denominator 2 (8) then 8/8 = 1. If you mean for the 8/2 to be multiplied by the 2+2 you'd have to format it as @JaimeInTexas put it on a line like that or get funky with asci:

anyway back on topic, apparently even Snopes is pointing out a lot of the pictures are not current.
https://www.snopes.com/fact-check/hoarding-gas-plastic-bags/

"I wonder how many people will be killed by such stupidity before the current gasoline crisis is over?"

All of them, preferably.

Once again, I am reminded of that oh-so-appropriate quote from "Oath of Fealty": Think of it as evolution in action.

Idle curiosity. How long does it take for gasoline to dissolve one of those plastic bags?

Life ain't for everybody.

Sherm: Quite a while, I suspect. Consider modern 'gas cans' are plastic rather than metal. And from... experiences the details of which I shall NOT go into: gasoline CAN be held in a Ziploc-type bag, but will instantly dissolve/pop a latex balloon. (The balloon, will, however, hold acetone...) The problem (behind the lack of material strength) is one of sealing and dealing with venting.

Typical grocery store plastic bags are made of polyethylene, while gasoline is a hydrocarbon mix with typically some long-chain alcohols thrown in. I would imagine that a grocery-store bag would soften pretty quickly with gasoline in it, though depending on its manufacture (that of the bag, I mean), it might hold out for a little while due to polymer crosslinking or something.

Perfect ways to "get more bang for your buck"

This sort of thing is the end result of a world of societies whose populace have become too dependent on high-tech to do all their thinking for them instead of doing and thinking for themselves.

Eh.
It’s mostly a matter of not doing it. I haven’t touched a formula written like this for a couple of decades, and prior to looking it up, would have sworn the order of operations for the problem was parentheses, multiply, divide.

That’s before considering the way it was written, mind you. A slash normally represents a fraction in everyday life, and especially so when typed out, as there’s a dedicated division symbol right there on the keyboard. If I were to properly use the pound symbol (#) on a social media site, people would be confused. And they’d have every right to be.