About the November 2020 elections in Wisconsin...

... can you say "Shenanigans"?  I thought you could.  This report certainly suggests that!

According to the state’s Committee on Campaign and Elections, there are 119,283 “active voters” and hundreds of thousands more “inactive” voters who have been registered for over a century.

This number, which totals over 500,000, leaves the door wide open for bad actors to cast invalid votes on behalf of those names who have since passed away sometime in the past 100 years.

This hearing comes amid increasing attention on Wisconsin’s 2020 election results, being that it was a swing state Trump heavily focused on during the campaign and was poised to win. After winning Wisconsin in 2016 against Hillary Clinton, Trump allegedly lost it to Joe Biden by a slim margin of just 20,682 votes.

Because of the speculation regarding the legitimacy of the results, GOP lawmakers recently succeeded in pressing the state to conduct a 2020 election audit, which yielded shocking levels of irregularities and evidences of fraud.

Let's see now . . . 42,000 "inactive" voters as of August 2020, who suddenly became "active" in November 2020 . . . and the Biden campaign's winning margin in Wisconsin (against all expectations) was less than half that number.  Makes you think, doesn't it?  Yes, I'm aware there could be an innocent explanation for it - but that has not been tested, and those 42,000 votes have not been investigated.

I continue to believe that the November 2020 elections were stolen by massive electoral fraud on the part of the Democratic Party and its allies.  None of the questions raised by the election (which we've covered exhaustively in these pages) have ever been comprehensively investigated and satisfactorily explained.  Democrats have effectively prevented the courts from investigating them, through "lawfare" tactics, procedural motions and bureaucratic obstacles.

The really important question has never been answered at all: 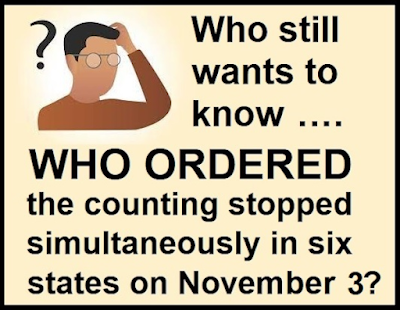 That's a very good question.  What's the answer?  Remember Ian Fleming's famous dictum:  "Once is happenstance.  Twice is coincidence.  Three times is enemy action."  With six states involved - all "battlefield" states, and all showing dramatic changes in voting after the unexplained stoppage - don't tell me that wasn't enemy action (enemies of democracy, that is)!

My trust in Democrats is minus 33 billions.

And who thinks they will be any more "Ahem, Honest" in the next "elections" Err Selections for our Representatives?

They suffered not a bit of legal or social PAIN for this blatant theft. Have NO SHAME about using lawfare to continue to hide their theft. And seem happy to repeat whatever makes our side look like tin foil Kooks when we question.

Freedom of the press belong to those that OWN the Presses. The Socialist-Democrats OWN them.

The four boxes of liberty is an idea that proposes: "There are four boxes to be used in the defense of liberty: soap, ballot, jury, and ammo. Please use in that order."

I wonder what box Ian Fleming would say is next?

This is at least the 3rd time that a Presidential election has been stolen since the beginning. And this one is by far the most open steal yet. It is like they didn't care that everyone with a brain can see that the election was stolen, because they have no intention of having any more free fair elections. I suspect we will be resorting to the bullet box before this is over.

This is treason against the people.

This explains the continual fiasco with illegals, despite every poll has people saying stop them. I can't remember one that dropped below 2/3s stop immigration for as far back as I can remember.

We are only nominally represented, but reallybwe are ruled by technocrats, large corps, and a few others who all work with some ideological coherence and a desire for power.

Were are a combination if all three i fear. The fools will let it burn as long as they get there's.

Too little, too late. And NOT getting media coverage, so few will actually see this!

1. There is zero evidence of fraud

2. There may be fraud but it is so rare as to be irrelevant to the outcome.

3. The election is over, you need to get over it and move forward. Why do you keep living in the past. Do you really want to put the country/state/county/city through that kind of upheaval?

4. You are trying to keep minorities from voting with your racist election reforms.

@heresolong: You clearly haven't bothered to read any of the posts on this blog that clearly lay out the evidence for electoral fraud. There are many more elsewhere. None of that evidence has been disproved; none of the questions raised have been answered. Unless and until that's done, I shall continue to maintain that the November 2020 elections were stolen.

As for wanting to put the country through that kind of upheaval: what else would you do to get rid of an illegitimate government? If it takes upheaval worse than that, so be it.

As for racist: what on earth is racist about wanting to ensure free and fair elections? Kindly show me a single instance where racism in elections has even been discussed here. That's a progressive left knee-jerk talking point, and it doesn't work any more, because we're wise to it and we won't be fooled any longer.

You're on a hiding to nowhere.

@Peter
He is quoting the Liberal mantra.

"Why does it matter?"

He was missing the /sarc tag

We aren't going to vote our way out of massive electoral fraud.
The Left is just following the precepts laid out by their mentors, in the spirit of Clinton's Secretary of State Project. "It's not the man that votes who counts, but the man who counts the votes."

An element of this struggle reminds me of the tax protestor movement from the 1980's. Then, the protestors thought they could appeal to the system through its judiciary function as the tool to upend the system that the judiciary function was designed to protect.
The ones fighting election fraud are suggesting we can fix this at the next election. It's as if they don't know that what happened.

I said it at the time. If we, the people, allow them to blatantly steal this election, we’ll never have another fair election again. I had my gear packed and mags loaded thinking we would never allow this treason to occur…….but we did. I lost a lot of hope for our republic.

Hahaha ROTFLMAO...what did we hear from liberal for over 4 years: colusion, fascist, "not my President...etc. In response how about Ukrainian & Chinese collusion, Fascist censorship,and not a president but Resident via co-opted election. P.S. from an American veteran perspective let's not forget the live & sacrifices passed on by aiding/gifting terrorist organisation/enemies all that military hardware & money!