If the unvaxxed are going to be "shut out", we'll have to build new networks

There appears to be a growing movement around the world to "shut out" those who will not accept the COVID-19 vaccination.  They're being denied basic rights like access to stores, ordered to quarantine themselves, threatened with imprisonment if they refuse to comply, and more of the same.  A few examples from overseas:

Every state in the union has its own measures in place - far too many to summarize here.  Some are very restrictive, others less so.

I've made my own position on COVID-19 vaccination very clear.  I regard the existing vaccines as profoundly unsafe, and more of a health risk than the disease itself (which I've already had twice in two years, and come through with no major difficulties despite being in several of the high-risk groups for it).

If you don't agree with that perspective, consider this information from the World Health Organization (click the image for a larger view): 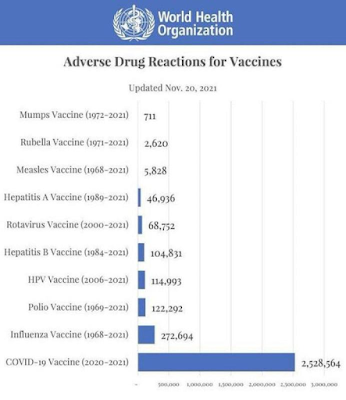 (EDITED TO ADD:  To access the raw information and a breakdown of reported reactions, search http://www.vigiaccess.org/ using the keyword "COVID-19 vaccine".  At the time of writing, the total number of adverse reactions recorded had risen to 2,703,969 in 2021 so far.)

Obviously, those raw numbers are hedged about with official warnings and cautions about the further investigations that are needed.  That's a given.  Nevertheless, if you can look at those bars on the graph and tell me that you're still absolutely confident that the available COVID-19 vaccines pose no risk at all to your health . . . all I can say is, you're living in cloud cuckoo land.

Meanwhile, those of us who won't accept vaccination find ourselves increasingly shut out of normal everyday life in many parts of the world.  Well, if the powers that be want to play that game, let's do the same.  We can inflict just as much pain as they can, if we put our minds to it.  A few ideas:

As John Nolte profanely points out, speaking about right-wingers in general rather than only those opposed to COVID-19 vaccinations:

And so, like a mob of fat, comfortable, uptight Margaret Dumonts in the face of Groucho Marx, the media’s jaws still drop when our response to their shame campaigns is a middle finger and poke in the eye.

This is the beauty of building our own thing. All these filthy crooks can do is sputter out their helplessness. But, best of all, they sputter it from their own velvet echo chambers.

Yes, of course, we will build our own thing, you fascist Nazis.

That’s what free people do; that’s what the human spirit is engineered to do. Even in the Soviet Union, even under Nazi occupation, people never stopped fighting to be free, to live in a country where they could say and do whatever they wanted. If Hitler and Stalin couldn’t stop us, do you think a bunch of snobby “journalists” and a pasty, dead-eyed freak like Mark Zuckerberg will?

One item from a '50s French protest: to go the stores pushing the policy and fill the cart, then leave it in the aisle to be re-stocked. A dozen people a day at that same hour sends a loud message to management.

The "vaccination" thing is looking more cultlike by the day.
This week's development: Level 4 Initiates (the highest level known to the public; those who have received both doses of the Holy Vaccine plus two boosters) must shun lowly Level 3 Initiates, as the latter are now considered Unclean and can pass the Pestilence to the Fully Vaccinated.
... Funny how the ones at the highest vaccination level are now supposed to be at the highest risk of catching the disease, to the extent of panicking if an unvaccinated person, infected or not, might be on a Zoom call with them.

Here's another one for the North American list. New Brunswick Canada has essentially said that businesses (like grocery stores) can insist on proof of vaccination before entry.

That's a two-month old story, and in the last two week, their stunning and brave plans have been overturned by three federal courts and the NYFS Supreme Court.

This is going nowhere hereabouts.

@Aesop: Yes, the US report is two months old, but it remains administration policy. Furthermore, the courts have not "overturned" it - merely stayed its implementation until a full court can consider it in depth. One hopes that will overturn it, of course; but it won't stop the administration introducing further measures in an attempt to get around the courts.

And to further what Peter said, so? The Supremes and the Lower Courts have been telling the Biden regime to go suck an egg, and the Biden regime just turns around and doubles down on the stupid.

Like, well, Vaccine Mandates. Oh, gee, look, some lower court has 'stayed' implementation. So sorry, not sorry, here's a double dose of stupid mandates dropped on the American serfs and peasants.

And a lot of it is done just like any Chicago political play. By innuendo and force. Do this or you'll be cut out of the Fed Money and be denied participation in Fed programs and we'll sick the various Fed agencies on you. Hello, FBI, EPA, BATFE, HUD, DEA, ETC, ABC, 123, LGB, FJB...

Thanks to Congress abrogating their responsibilities to actually govern over the last 40 years (coincidentally, a lot of the time Biden was in Congress) to the Executive Branch, the powers of the EB via Executive Order and Presidential Findings are nigh unto dictatorial.

Which is why the current regime is looking at overhauling the Federal Court System, starting with the Supreme Court. Court packing, removal of the ability to determine if a law or action is constitutional or not, relegating the whole third leg of government to sitting on the sidelines dealing with only criminal cases.

That presidential commission on reforming the Supremes is still going on. Unreported, but it's still there, working away to take power away from the Supremes (and lower courts.) And the Biden admin is working with the House Majority to also reduce the powers of the judiciary to rule on legalities of laws and actions, like, well, vaccine mandates.

Thankfully our founding fathers put in a pretty decent governmental system that works to stop some of the worst of tyrannical despots within the system. So far.

But if the judicial system was downchecked, the monster that is the DNC would be rolling roughshod over what remaining rights we have.

We note that in Italy, the police are not bothering with enforcement, nor are the shop-keepers. In addition, there is "confusion" about what the rules actually are.

I copied this from someone's blog (don't remember who's but thanks!)

If you have to be persuaded, lied to, incentivized, coerced, bullied, socially shamed, guilt-tripped, threatened, punished and criminalized…If all of this is necessary to gain your compliance ~ You can be absolutely certain that what is being promoted is not in your best interest ” – Ian Watson

Building System Two is a reasonable and useful response, but, (and you knew there was a but in the room) adding another bifurcation to society would not be a good thing.

There is somewhere between 10-30% of people unvaccinated. There are questions about the validity of the data. Regardless-take that chunk out of the economy and what happens? I think this is a feature, not a bug. Our political masters are attacking the middle class is the way this feels to me. Every time I turn around it is something else with a negative impact. They are not trying to break us, they want to break the country.

Hard to know what is really going on, lots of statistics flying around. Pull the CDC Weekly Counts of Death and it is easy to see the vaxx has made NO difference. Zilch, Nada. In fact natural cause deaths appear to be up. Trend lines are wobbling and I don't have the software anymore to easily test for statistical significance, but best case is no effect. The question now is what happens over time and what happens with additional boosters, do they exacerbate the situation? Another indictment, US statistics for vaccinated versus unvaccinated are not available.

Natural cause deaths are up 20% from pre-COVID. This is subtracting out COVID deaths. Why is this not talked about? We may be under-reporting COVID deaths. 2 years into this and our information stinks. Our Public Health Agencies are at best ineffective and are probably having a negative health impact.

If we are to be excluded from society then why should we pay taxes? Why should we obey society's laws?

I'm serious, can anyone tell me why we should? Isn't this the very definition of "No taxation without representation"?

Learn to take "yes" for an answer even from the courts.
It's a gaping crack in the facade.

And if they try a yellow-star apartheid here, this ain't Australia.
The shooting will commence shortly afterwards, and TPTB know that to a metaphysical certainty.

There aren't going to be two systems.

There are going to be people carrying the man's water and getting capped in the face for that, and those that don't.
No third option. And it won't matter if it's shop clerks or cops in front of the muzzle, on the day.

Boycotts? Pfft.
They're going to come in 87 octane, one flaming glass bottle at a time.

Uncle FedGov is about to learn, in a societal way, the meaning of the phrase "If Momma ain't happy, ain't nobody happy."

That was your impact warning briefing.

I fully support the idea of having those that have been jabbed working within the system to provide for those who haven't by purchasing goods, etc.

Also, those who have been, can monkeywrench the system from within.

Ultimately, it will become mandatory on pain of death. For our health, of course.

I really like your blog and mostly agree with your views but I've got to disagree with the anti-vax stance.
I'm double vaxxed along with my family and if you don't want to get vaxxed that's fine with me, your body your choice. It seems the risk of death after vaccination is lower than the risk of death after infection, so the logical way to go is to get vaccinated.
I also believe the whole Covid hysteria is bullshit,it's serious but not the end of the world.
I worked in Zambia for 5 years and was at a loss to understand why my workmates would demand the company must pay $3 for mosquito nets for their children but wouldn't buy them themselves.
50% of people are dumber than average, let evolution sort out who's right

I would ask the more or less rabid vaxxers this question: "If Anne Frank was unvaccinated, would you turn her in?"

Maybe you've missed the VAERS numbers since the not-a-Vaxx was inflicted on humanity.
Evolution is sorting out who's right, at a dreadful rate.

Call me when the makers of the poisons assume full legal responsibility for adverse reactions, and the vaxx becomes a matter of personal choice unconstrained by political and economic coercion and scapegoating, like every other medical decision in human history, and we can talk.