The Salvation Army learns the meaning of "Get woke, go broke"

I've long been a supporter of the Salvation Army when it comes to effective, realistic, practical disaster relief and help to the poor.  For decades I've donated to them in preference to the Red Cross or other mammoth, overly bureaucratic relief organizations, and I've recommended them to my readers in these pages.

Sadly, the truth proved to be even worse than I'd feared.  Despite their protestations about being "misunderstood" and their immediate withdrawal of the "guide", it was clear that at least part of the Salvation Army's leadership had been seduced by the theoretical as opposed to the theological.  They had lost sight of the eternal truth that a Christian church's primary, overriding duty and responsibility is to proclaim "Jesus Christ, and Him crucified", rather than any other message (particularly secular ones).  In proclaiming the former, the latter are automatically addressed, albeit from a radically different perspective to the world's answers.

If you wanted to completely destroy the guiding mission of a charity, the Salvation Army is showing everyone exactly how to do it.

I’m not sure what qualifications or prisms others use, but myself, as a donor, I want to see my money used by a charity in such a way as to care for people who are in the most need – and that has absolutely nothing to do with race or any other qualification.  I am literally stunned by the intent of the Salvation Army in this mess, and their cleanup effort is even worse.

This is one of the biggest disappointments of the year, and yet, again shows that organizations can lose their entire purpose by following leadership making stupid decisions.

(Tragically, the Salvation Army finds itself in good company.  Many mainstream Christian denominations have done as badly, or worse.  To name just one example, look at how the hierarchy and leadership of the Catholic Church have effectively abandoned the faithful over the past twenty years or so in connection with the clergy child sex abuse scandal and other issues.)

Now the Salvation Army finds itself desperately short of funds and other contributions.

The Salvation Army is facing a shortage of toys and donations ahead of the holiday season, and urge communities to find a way to help.

The nonprofit reports it gets 75% of total annual donations during November and December, and they are once again in need of support ... "There are many reasons why both financial and toy donations are down this year, not the least of which is likely pandemic fatigue and concerns about employment and the future," said Colonel Cindy Foley of the NW Salvation Army Division. "We are actually trying to provide food, shelter, toys and clothing to double the number of families we served last Christmas, and in the midst of the growing need we are seeing fewer people donating at our virtual and physical kettles."

Surprise, surprise!  What else did the Salvation Army expect?  If you, in so many words, accuse your most dedicated supporters of racism, why are you surprised when they withdraw their support?

The Salvation Army should have read their Bibles more carefully before deciding to step away from Scripture and towards secularism.  The prophet Hosea's warning to Israel might have given them pause.  "They have sowed the wind, and now they will reap the whirlwind".

My donations to the Salvation Army will, in future, consist of one of these preprinted slips, cut out and kept in my wallet for use when I encounter one of their famous "Red Kettles" at local supermarkets and other sites.  (Click the image for a larger view.) 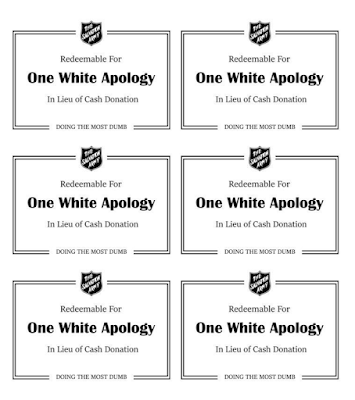 That, at least, is a contribution they'll understand.  (Aesop's contributions will be somewhat more graphic, as will his ongoing rejection of their position.)

The big question in my mind is did they actually change their position and get rid of those pushing it, or did they simply withdraw their publication because they saw that they'd made an expensive blunder (and have retreated in order to re-group and try again later)?

The Salvation Army was the last best hope for Christian values in a big charity. When did they go secular?

And it's not fair to take out one's ire at the bellringer level. Those are just people, often promised much but treated like crap. And management is so insulated from the bell-ringer level that any action at BRL other than just not doing anything is useless.

Like Catholic Charities (or any 2nd collection opportunities, or 1st collection if the money is going not directly into the local Church or Diocese but instead is being used for secular bullscat that...) Starve them.

Want to play unfair with my money? Then starve. Sell off your pretty jets and your big corporate buildings and fancy salaries, like, well, the NRA and Wayne Lich-King Lapierre. Starve, baby, starve.

Sucks to lose all that money, have to lay off staff or tell volunteers that you're unable to open because no money.

Shame that all that charity money stays in the pockets of the people and is better used by themselves for whatever they want.

Sucks to be them. Starving.

Go back to traditional Christian values of, well, the seven knightly virtues; Courage (to do the right thing in a world of wrong things,) Justice (to do the just thing in an unjust world,) Mercy (to give mercy without the expectation of reward,) Generosity (to give worldly means without expectation of reward just because it's the right thing to do,) Faith (to have faith in one God in a world of false idols,) Nobility (meaning taking proper care of people under your care, to the best of your ability, noblese oblige and all that,) and finally Hope (that you can effect a positive change on a dark and fallen world, and that your selfless actions will bring light into the darkness.)

I'm more than happy to keep my nasty White da rasis money in my pocket this Christmas season.

Maybe they could hit up BLM and other communist organizations. And we know how duh-versities are such a powerful force in the domestic economy, so I'm sure they can make up the difference.

They are hiding, not repenting.

Wholesale charities like The Ford Foundation use other people's money, usually long dead other people, to fund fashionable causes and impress people at parties. They earn accolades from the press and large salaries for the managers. The wishes of the original benefactor have little to no influence on how their money is spent. A smart living lawyer can usually out maneuver a dead benefactor.

The SA is a retail charity. They have to earn their donations day by day, year by year. The other people (with the money) are very much alive and lawyers and smooth talkers don't mean squat. The SA acted like they had an endowment and discovered that they didn't.

I have a friend who is a Major in the SA. He and his wife, also a Major, are stuck in the middle, trying to do retail charity with idiots for bosses. I'd gladly help him in his work because I know that my time and my labor can't be sent up the line to the national and international organization. (Full disclosure: He's recently been transferred to Wichita, Kansas so I'm a thousand miles away from doing him any good.)

Disclaimer: I volunteer at the SA one day a week doing KP and giving lunches to the street people.

The farther you are from headquarters, the less this BS means to people doing the work. My biracial co-worker made a production of apologizing to herself about the white half of her body having privileges that her black half did not have. The worker bees are not buying into the message at all.

IF your local Salvation Army is not buying the PC crap from headquarters, you can give money directly to them by listing them on a check, Like SA Bugscuffle TX. The money will stay right there, not going to the local area command or headquarters.

I have always tended to ignore headquarters directives from on high and done what I thought was best. Yes it was career limiting but I never minded it.

There are plenty of other charities that will welcome your donations but please give to someone if you can.

My Church went woke when an Elders woke wife was hired to run the church office she and her clique got rid of the pastors that preached the Gospel and the new guys teach touchy feely subjects and junk like reaching out to various groups our ancestors might have offended not to evangelize to those communities but apologize to them. We left and found a new church preaching Christ and him crucified and risen for the forgiveness and salvation of the World.

Good on you Skyler. If you are going to follow a religion, follow it with your whole heart and the way it was meant to be.

You betcha they were more graphic.

After seeing them and the thoroughly secular-woke Red Cross side-by-side waaaaaaay back in the Northridge Earthquake, the Salvation Army was the only organization I was pulling for, and giving to, unhesitatingly.

They are now Satan's Army, and will be treated as such.

If they fire, not only the two woke-Commie dorks that wrote their racist woke manuals, but disband the ICSJ, and fire every swinging Richard from top to bottom who greenlighted it, printed the materials, and thought it was a good idea, publicly, and get down on their knees and publicly and sincerely grovel and beg for forgiveness, of both God and man, I might reconsider.

Otherwise, it's skidmarked TP scraps only in their donation bucket in perpetuity, and it'll be snowing in Hell before they get another cent from me.

If they're around next year, I'll be having tokens made that say "1 White Apology" on one side, and suggest an uncomfortable and anatomically impossible act on the obverse, and I'll be selling them at cost.