More about the crime wave in progressive cities

A few days ago I wrote an article titled "The crime wave as a precursor to civil war".  In the light of that article, I thought this one by Leighton Woodhouse made interesting reading, particularly because the author admits he's a progressive rather than a conservative.

My wife and I are scrambling to find daycare for our 16-month-old son. We’ve had a “nanny share” up until now, which means we and another couple employ a nanny for both couples’ kids and split the cost. Our nanny is wonderful, and she lives just a few blocks from us. But a few weeks ago, someone walked up her street spraying bullets into random houses. One of the bullets found its way into her living room, as she and her family ducked for cover. At that moment, she and her husband decided they were moving their family out of Oakland.

The shooting didn’t even make the local news. Apparently, in the Bay Area right now, you can walk up a residential street firing your gun into houses, and you still won’t be able to compete for attention with all of the other sensational crimes.

Perhaps you’ve heard about some of them or seen the videos.

The flashmob-style “smash and grab” robberies that originated here—in places like Union Square in San Francisco and the shopping plaza in affluent Walnut Creek—have now spread across the country.

Asian seniors are brazenly assaulted in the street; one octogenarian was body slammed to death. This week, an Afghan refugee—a father of three who had worked as a translator for the U.S. army—was shot dead near a playground in San Francisco’s Potrero Hill neighborhood.

And now freeway shootings are a thing. A few weeks ago, at nine in the morning, a 29-year-old mom on her way from Oakland to San Francisco for a job interview with her fiancé and two kids was randomly shot and killed in her SUV at the Bay Bridge toll plaza. In an interview, the victim’s mother recalled being heartbroken after hearing the story of an earlier crime, in which Jasper Wu, a two year-old who was sleeping in his car seat, was shot and killed by a stray bullet fired from another car driving in the opposite direction. It was not even two weeks later when she lost her own daughter the same way.

I recently finished reading “San Fransicko”, by Michael Shellenberger. I recommend it. 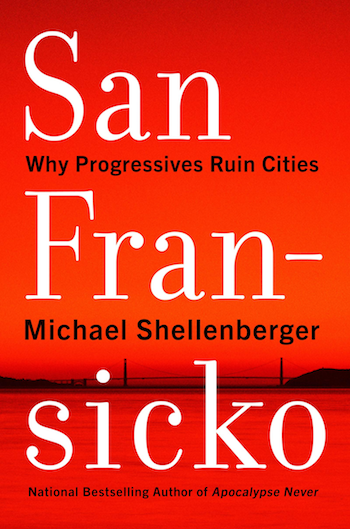 The subtitle is provocative: “Why Progressives Ruin Cities.” But, as Shellenberger explains, he does not mean to imply that progressives always ruin the cities they govern. He’s just interested in the specific phenomenon of when progressives do ruin cities, and explaining why that happens.

And progressives—I count myself as one of them—do ruin cities. Or, at least, they put in place policies that cause profound harm to the people living in them.

We live in the aftermath of the progressives’ triumph over institutionalization, and it looks like San Francisco’s Tenderloin District or L.A.’s Skid Row. Today, with few exceptions, there is no more involuntary treatment for serious mental disease or drug addiction. But nor is there a humane alternative. There is only jail or the streets.

The same thing is now happening with criminal justice. Progressives today are passionate about dismantling the status quo, but have offered little in terms of a viable alternative. It’s a posture Shellenberger calls “left libertarianism,” and it assumes that those kinder, better, more forward-looking criminal justice systems will spontaneously emerge. The past year has given us plenty of evidence to reveal that idea as the wishful thinking it is.

I guess, sooner or later, even progressives have to face reality - and reality isn't progressive.  Who'd've thunk it?

Bucks and Montgomery Counties around Philly used to be solidly red and low crime. Both counties have been filled with people from the city, NJ, and NYC.

They are there for the safety, schools, and low taxes. Man do many still vote and behave like they are still in the crapholes they left.

On a related note to no alternatives - (note, sometimes NSFW language and concepts in her posts)

While the sanitariums had their issues, I've come around to the position that overall, as an alternative to prison-or-homeless, these were kinder, and better for society overall

As I keep saying, the word "Progressive" always, ALWAYS reminds me of CANCER. Both are killers.

Time for San Andreas to make another house call.