Making money out of gun buybacks

I had to laugh at this picture, found on MeWe yesterday from a post on Twitter.  Clickit to biggit. 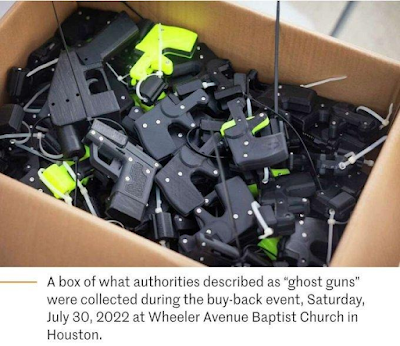 Apparently the offer was $150 for any gun handed in.  That would, in theory, have brought in over $9,000, but the police haggled.  According to a commenter on the thread:

Still a healthy return on his investment!  At that sort of profit ratio, it might be worth buying a 3D printer, plus the necessary designs to produce one's own.  Gun buybacks have never been shown to reduce crime rates anyway, so why not put the money to better use - namely, one's own needs?

How much PLA do you need per "gun"?

Why not? It might help pay for some property taxes so willingly taken at the point of a gun.

Are you technically 'manufacturing firearms for profit' at that point?

How long until ATF goes after someone for doing so without an 07 FFL?

One roll of PLA is like $25 per... looking at how small those are? I'd say they took one, maybe two rolls MAX to make.

Including the time? Figure 6 hours each +/-... the power use is the killer, figure $200 depending on location (thats what my power bill jumped when I ran my 3D Printer for a week straight 24-7...)

Not a bad idea overall

I miss 'gun buybacks'. Only managed to go to one in a city two hours away, before they stopped.

Show up with a pocket of cash, go up and down the line, ask to see what they're turning in, and if it's good, buy it from them. I picked up a nice Ruger GP100 for $200, just needed a bit of TLC.

Tweell, here in Washington state all transfers have to go through an FFL so you can no longer do that. Gun store did it some years ago in Seattle and presumably still could. Put up a sign across the street offering more than the buyback amount and then negotiated deals depending on what was offered.

Only if they are actually firearms and not just lumps of plastic...

Don't let them control the conversation or the thoughts, they can't "buy back" what they never sold or owned.

It's a very marxist thing to try to control the language used to shape the thoughts that are possible.