That's about as close as you can get to a plane crash without having one...

I was amazed to see this photograph of a Russian Antonov An-24 passenger aircraft, which "contacted the ground with its left wing" while landing at Ust-Kut airport in Siberia today.  Clickit to biggit. 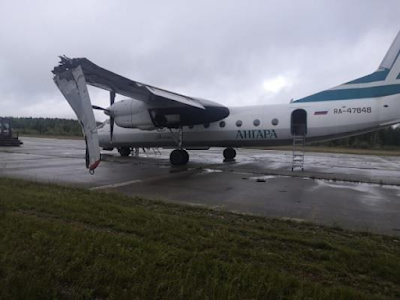 There's no weather information available about conditions at the time.  I can only presume that gusting winds, probably including cross-winds, had something to do with it.

Remember, this is a high-wing aircraft.  For it to be so steeply banked on landing that the left wing-tip to hit the ground - and hit it that hard - is almost inconceivable.  It must have been banked so far to the left that it was just about out of control.  How the pilots managed to recover from an accident like that, and land the aircraft safely, is beyond my imagination.  They certainly earned their flight pay!

It also demonstrates that Soviet-era transport aircraft (this airframe is about 50 years old) were built tough.  A modern high-wing commuter airliner like the De Havilland Dash 8 or the ATR 72 would probably have crumpled up its wing like tinfoil, offering no chance for recovery.  The wing spars in those old An-24's are very strong indeed;  I had occasion to study a couple of them "up close and personal" in African nations after accidents or fires, and they struck me as more like iron girders than spars.  I suspect that particular wing spar won't be flying again, but it did its job in holding things together until the plane was safely down.

I'm thinking the airline will also be facing a massive laundry bill for the passengers and aircrew!  Talk about your brown-trouser moment . . . !

Recollect a story about someone in a Russian amphib aircraft in Cuba that lost ALL oil pressure and kept flying for another 45 minutes to a safe landing. Tough doesn't begin to cover it.

He most likely 'ground looped' it. The weather does not look perfect but it's Siberia