So much for the "value" of money

When was the last time you saw someone pick up a penny off the street? A nickel? A dime?

Nowadays, even bums often can’t be bothered to pick up anything less than a quarter.

The US dollar has become so debased that these coins are essentially pieces of rubbish. They have little to no practical value.

Today, the melt value of these pre-1982 pennies is 2.1 cents—more than double their face value—as commodity prices have soared and the dollar’s purchasing power has plummeted.

That’s why the US Mint no longer uses so much copper to make pennies. Modern pennies are only 2.5% copper, with cheaper zinc making up the remaining 97.5% of the coin.

Last year, the US government lost over $144 million making pennies and nickels.

So, why is it wasting taxpayer money making coins bums don’t even use?

Because phasing out the penny and nickel would mean acknowledging currency debasement—governments never like to do that. It would reveal their incompetence and theft from savers.

This isn’t new or unique to the US. For decades, governments worldwide have been reluctant to phase out worthless currency denominations. This helps them deny an inflation problem even exists. They refuse to issue currency in higher denominations for the same reason.

The government eliminated these large bills in 1969 under the pretext of fighting the War on (Some) Drugs.

The $100 bill has been the largest ever since. But it has far less purchasing power than it did in 1969. Decades of rampant money printing have debased the dollar. Today, a $100 note buys less than $13 in 1969.

I wonder how long it'll be before kids' play coins are in actual monetary circulation? 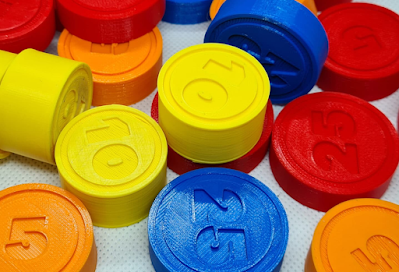 We may as well use them.  At least the plastic from which they're made has a recoverable petroleum content to provide some value!

I hope they don't expect us to eventually eat plastic. Petroleum gives me gas.

Canada eliminated pennies. Was a bit confusing when my change at a coffee store was rounded down.

Not why I don't go to Canada anymore, that was Covid and the government/people response.

The last time I went to the hardware store and bought quarter inch washers they were 15 cents a piece.
If I got my cordless drill out and a quarter inch drill bit and drilled holes in 15 pennies I'd have 15 washers for 15 cents.
A much better use of resources in my opinion.

Them Yankee Greenbacks will be worth as much as Great Granpappy's Secesh bills force too long. Wonder if they'll be rioting over Flour prices in Washington like there was in Richmond under Jeff Davis?

I know people who still pick up pennies and nickels.
I remember hearing people in the 90's talk about this. It may happen less now, but it still happens.
Actually, at one point there were bills up to $500,000 - but they weren't public, only for interbank transfers.

Found a nickel on the breakroom floor the other day.

Yes I picked it up.

I, also, pick up change. About once a year I turn it in for between $50 and $100. I usually save it for when things are really tight and I need food money till the next check comes in.

As to using quarters, well, er, ah, I have never (cough, cough) punched holes in pennies to use them for washers for copper rivets (or aluminum rivets.)

Of course, if you're really cheap, you'll use cut-down roofing nails as rivets and zinc-cupric disks as washers.

Everyone should have a pair of fencing pliers (for to fix fences, punch holes in things, cut wires and, of course, making rivets out of nails. Not a bad self-defense weapon either in places where more traditional arms are verboten.

The Presidential series of Dollar coins are copper with a brass cladding. Don't know the intrinsic value, but they're thick enough to have dates and mottos on the rim.

Someone posted a picture of a bag of plastic pennies from some store. A bag of 100 pennies was $3.49.

That means plastic pennies are worth more than the real ones.

The age of barter might be around the corner.

Even with a chronic back injury, I pick up coins, even pennies. I'm thinking thw zinc can be used for hardness when casting boollits.

A plastic gallon jug will hold circa $120 of coins. (various denominations, random mix)
I know this from experience.

The idea of using pennies as washers just kinda blew my mind.

Gotta think outside the box man.

I keep three jars for spare change. One gets quarters and dimes, one has nickels and pre-1982 pennies, and the third has newer pennies. I still pick up change, but not every time.

Just over two decades ago, when I was stationed at RAF Mildenhall, the base commissary, BX, BXtra and other American currency stores didn't use pennies because it wasn't worth it to transport the weight across the Atlantic for those small military base economies. So, whatever the bill would be, it would be rounded up or down to the nearest nickel.

The exception to this was the on-base post office (APO). They were apparently legally required to give exact change, so that was the only place where you'd end up with a penny in your change... and the only place you could use them, practically.

These days, however, with debit card and credit card transactions being de rigeur, even with fresh-faced junior enlisted, the problem of handling cash is much reduced, and I'd have to think that AAFES might have dumped the nickel, too. Anyone been to an OCONUS base exchange recently enough to confirm or deny?