We've all seen how the flood of illegal aliens pouring unchecked across our southern border has brought with it greatly increased crime, violence, and social ills.  The Mexican cartels control the trade in human bodies, charging each of them to get them to (and then into) the USA.  In turn, those migrants are threatened and/or bribed into becoming drug "mules", bringing with them heroin, fentanyl, crystal meth and other evils.  The women and female children are almost always targeted for sexual violence, and many are forced into prostitution once they arrive in America.  The majority of the aliens are young men, more than capable of earning a living by conventional means - but many of them are gang-bangers in their own countries, and they bring their criminal tendencies with them.

This is not reported by the mainstream media, who are obeying their masters in the Biden administration (and, let's face it, they actually agree that more illegal aliens are a Good Thing, because they want America-as-it-was to die).

However, we can learn a great deal from the same process in other South American countries, because precisely the same criminal organizations dominate it there, and they're doing the same thing.  Consider the millions who've fled Venezuela.

Tren de Aragua, Venezuela's largest homegrown gang, has become a transnational criminal threat. With expertise in migrant smuggling, human trafficking, and extortion, the group has followed the exodus of Venezuelan migrants and found ways to set up permanent operations in several Latin American nations. Its latest victim is Chile, where the Tren de Aragua has become a significant security concern.

Tren de Aragua has successfully muscled in on crowded criminal turf. While several rivals had already set up operations at the Colombia-Venezuela border, Tren de Aragua has carved out a niche along remote trails crisscrossing the frontier. It helps migrants, usually undocumented Venezuelans, to cross into Colombia. But while many migrants pay for their services and are free to go, others are coerced into crippling debt, forced to carry drugs, or kidnapped for sexual trafficking. 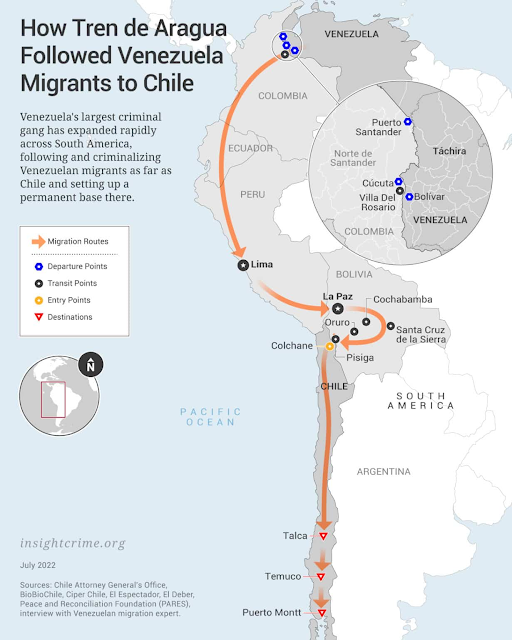 Migrant smuggling, moving people voluntarily across national borders, and human trafficking, where victims are detained against their will or coerced into exploitation, are intricately linked.

In March 2022, a gang affiliated with the Tren de Aragua was dismantled in Puerto Montt, a port city in southern Chile. According to prosecutors, it received Venezuelan women trafficked by the mega-gang from Colombia and Venezuela. While they went to Chile willingly, once they arrived in cities such as Puerto Montt, Talca, and Temuco, they were told they owed insurmountable debts, which had to be paid in sexual services. As evidenced in the Bolivia case, men can also be coerced to traffic drugs to guarantee their family's safety.

To keep a tight grip on migrants moving from Venezuela to Chile, the Tren de Aragua has built up an interconnected network of coyotes (human smugglers) and smaller criminal gangs, which help to receive, abduct and criminalize migrants.

“What exists is a network out of Venezuela that traverses Colombia, Ecuador, Peru, and Bolivia before finally reaching Chile. They are interconnected, supporting each other, receiving migrants from different areas, and channeling them to the places where they are headed. It is not a national network, but rather an international network, dedicated to this,” Hardy Torres, deputy chief prosecutor in Chile's northern province of Tamarugal, told media outlet Ciper.

There's much more at the link.  Repelling, but recommended reading to understand what's going on along our southern border as you read these words.  This is just one example.  There are many more, in South America, Africa and Asia.

That's the reality of illegal alien "migration" networks.  They have nothing to do with migration, and everything to do with organized crime - yet the Biden administration continues to allow millions of illegal aliens to flood across our border with Mexico, bringing that crime with them.  What's more, millions of misguided Americans continue to demonstrate and vote in favor of open borders, "refugees" and a one-world, no-borders utopian vision that has nothing whatsoever to do with reality.

Sooner or later (hopefully sooner), we're going to have to remove all these illegal aliens and send them back where they came from.  They won't want to go, of course, and their sympathizers won't want to send them.  Look for renewed waves of urban crime and violence as they resist.

Ain't we got fun?

And they gasped in shock when Trump said these countries weren't sending their best and brightest...

Add to that I believe I read that 30 people on the terror watch list have been apprehended at the border and consider how many would be terrorists have gotten through undetected. I remember reading Dr Forstchen's novella, "Day of Wrath" and like it or not this is a very real possibility. I was at a conference where Dr Forstchen was one of the speakers. He came up with the story line but told his wife he did not think he would write it because he was afraid of how he would feel if he wrote it and it happened. His wife said to him, how will you feel if you don't write it and it happens.

It is way past time to close the border down, put the military on the border to stop this invasion and then round up all illegals and deport them. Any illegal caught within the US immediately becomes ineligible for future legal immigration as they have already proven contempt for our laws and nation's sovereignty as "deplorable"as that may be.