Those Balenciaga ads . . . did you know?

I'm sure most readers are by now aware of the furore surrounding recent Balenciaga ad images, including showing a female child holding a strap attached to a "bondage bear".  Note, too, the demonic-looking bear on the sideboard, the chalice-like vessel on the table, the actual bondage-type chains in the shape of jewelry on the black fabric roll, and the images on the wall behind the child.  Click the image for a larger view. 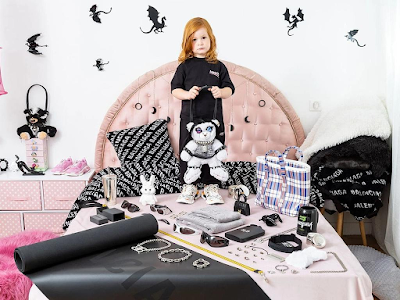 Commenters allege that the images amount to an endorsement or promotion of pedophilia.  A commenter on Gab has gone so far as to claim that the name Balenciaga is itself of satanist/occult origin. 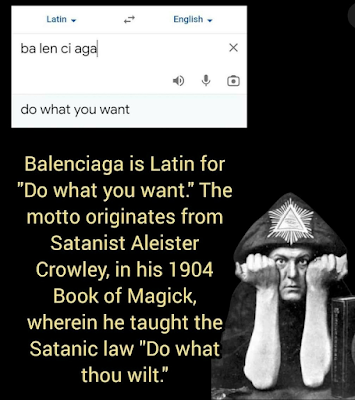 I'm no Latin scholar, but I wanted to check that:  so I looked up "Ba len ci aga" as a Latin phrase on Google Translate.  Lo and behold, it does indeed mean "Do what you want";  and yes, that phrase does indeed express Aleister Crowley's teaching, part of his Thelema cult:  "An it harm none, do what thou wilt".  Satanism was, indeed (and still is) a major element of Thelema.

So . . . is that the true origin of the name "Balenciaga"?  I find it a more than curious coincidence, to put it mildly.  If so, that's a brand that needs to die out, IMHO.  Christian readers, and others opposed to any form of Satanism and/or pedophilia, may wish to bear that in mind when it comes to spending their consumer dollars.

The company is named after its Spanish founder, Cristóbal Balenciaga Eizaguirre, not for something some guy said in England.

Perhaps so, Tom Stedham, but I find the article is compelling given their choice of advertisements.

Go back and look it up as two words: balen and ciaga and as a phrase. seems to me it means playing ball with your eyes closed.

What's the difference between a bulldog's muzzle, a horses bridle and bit, and that crap on the bear? not a whole lot, but who complains when people buy studded collars for rottwiellers?

FTR, Crowley was propounding Wicca, not Satanism, (Wicca rejects the idea of Satan or hell, let alone worship of His Infernal Majesty) which is why Wiccans rightly look at people asking them about Satan-worship as if they're retarded children trying to do calculus by taking off their shoes.

And the phrase, as the bloghost correctly noted, is "And it harm none, do what thou wilt" is (pardon the pun) one helluva lot more restrictive than the "do anything you want" implied by the idiotic meme.

Balenciaga is obviously selling something evil, and it certainly hasn't got anything to do with fashion, though evil is always in fashion with a non-zero number of any society. But using lies and half-lies "in the service of good" is truly a devil's bargain.

If one can't make a case against something on the actual merits, stooping to making crap up won't get them the verdict you're looking for.

IIRC, it's supposed to be "Salt and light", kids, not bile and mud-slinging. Hurt them with the truth, not made-up nonsense.

Yep, use common sense not BS to hurt them. $$$ flying away from them is good.

That "Ba len ci aga" supposed translation looks awfully fake. I've never seen Latin words looking like that. Not that I'm well-read at all in Latin, but it still looks really fake to me. Rather like the whole "Lorem ipsum" blabla, only more so.

Here's the thing. I never heard of this company or any of it's products and have never seen any of it's advertisments that I'm aware of because I'm too busy living my life. But now, thanks to all the outrage over this ad, I have. It worked. It doesn't mean I'll buy any of their products but now I've heard of them.

Mikey's right - it was a publicity stunt. Even so, the masterminds behind the ad should be thrown from a helicopter.

Do what you want is a really wide open instruction.

An it harm none, do what thou wilt"


But you toss in a bit of, Harm nobody,?? That right there Is what I have been taught was what life is about. That is far from evil.

I may be rusty, but I can still read basic Latin. That is not any Latin that I recognize. Contrary to Aesop, it's not hard to look up Crowley and find that he developed his own religion and it wasn't Wicca.

Aesop and Brutus are both partially/mostly correct. Thelema pre-dated Wicca and Gerald Gardner adopted the 'an it harm none, do what you will' as part of Wiccan thought and practice.

Regardless of the minutia, Aesop and NFO are completely correct in that this type of train of thought takes away from the real issue and makes us all look foolish when discussing the real issue of child grooming and the normalization of child sexuality.

What Crowley said was “Do what thou wilt shall be the whole of the Law.” which is fundamentally different from the Wiccan Rede, "And it harm none, do what thou wilt". The former is absolute license to commit any act, the latter imposes limits and is a very Libertarian viewpoint. Any Wiccan can attest to this.

No, but it was very influential towards that end, and it also wasn't "Satanism".
Words mean things, and clumsy memes that lie are simply stupid.

The simplest explanation is the best. The name of the founder, as usual with fashion houses.

A caveat, I am not a Latin scholar. Also I have known one individual, back in college, who was into "magick". He was at pains to emphasize his perceived view that it was benign. Yet one day I found him, and he was completely distraught, and genuinely afraid: His friends, so into "good magick" had decided to make a pentagram and summon a demon that night in the dorm. So much for the distance between magick and Satanism. "The father of lies" loves to deceive, and hates the One who is Truth.