Our title today goes to a delivery driver in England, for demonstrating that when technology (specifically, GPS and satellite navigation) replaces common sense, this is what happens! 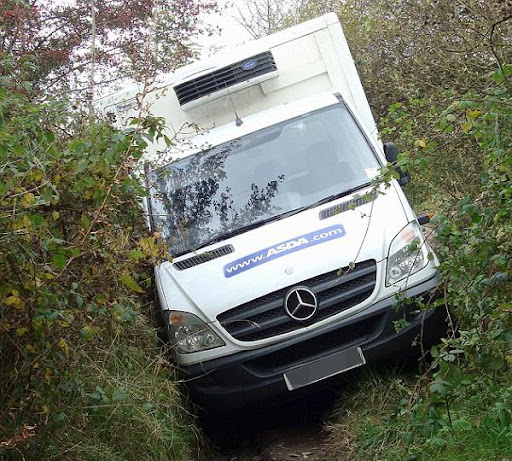 You may think anyone with eyes would realise that a 3ft-wide footpath is not the best route to drive a 6ft van down.

Unfortunately, however, far too many motorists seem to have their senses switched off by satnav – and this white van man was no exception.

The dim-witted Asda delivery driver blindly followed his high-tech guidance system into the dense woodland until he inevitably got stuck.

The worker, who was taking shopping to a farm, was met by bemused bikers and mystified walkers near Rossendale, Lancashire.

Cyclist David Bissett, who witnessed the latest blunder, 32, said: ‘I was amazed it had got down so far and I wondered how it was going to get back out.

‘You can’t fault Asda for reaching the parts that other supermarkets can’t reach.’

The RAC were called out and the vehicle, which had travelled from Asda’s Pilsworth store in Bury, was freed after an hour.

Edenfield councillor Darryl Smith said: ‘I wouldn’t blindly follow my sat-nav but some unfortunately do. At the end of the day common sense should prevail.’

He added: ‘A constituent alerted me that a minibus taking people to Manchester Airport became stuck in the same spot not long ago.

‘It seems to be one of the unluckiest footpaths in the area at the moment.’

I just don't understand drivers who do stupid things like this. Don't they ever lift their eyes from the GPS screen to look through the windscreen, for Heaven's sake? How is it possible that they can blindly follow electronic instructions without looking, now and again, at the real world out there?

Clearly I don't possess their brand of logic . . .

It probably helps to understand this if you know that Asda is owned by Walmart and shares the same values!

My husband does the same thing with his GPS and it drives me crazy!!! He never pays attention to the street or road signs, just goes by the GPS. I hate the thing and refuse to use it.