Of shrimp and DVD's


I'm highly amused to learn that an Australian shrimp may have developed a natural 'technology' that beats all our human optical drives.

The eyes of a remarkable crustacean from the Great Barrier Reef could lead to a revolution in DVD and display technology.

A combined research team has discovered the Mantis shrimp possesses the most complicated visual system of any known animal.

"The animal has to scan space to build up an image sequentially much like a radar. They have this scanning system which contains a lot of information such as polarised light, circular polarised light, colour in 12 channels and ultraviolet in six channels."

Professor Marshall and his colleagues' research has found the shrimp's eyes operate remarkably similarly to modern DVD and CD players and provide the solution to make much more efficient players, eliminating the need for specific types of players such as blue ray. 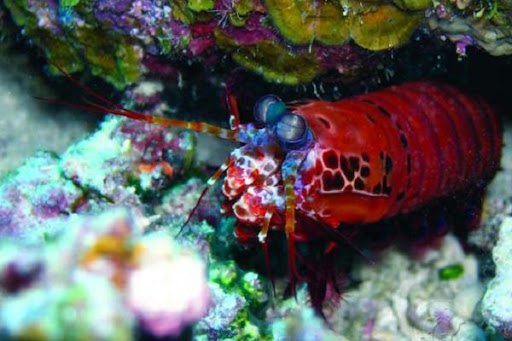 "Currently we use circular polarised sensors in CDs and DVDs to read off data from the discs. The shrimps have organised the same basic idea through evolution over 400 million years to see each other," Professor Marshall said.

"A quarter wave retarder (which the shrimp have) allows you to read efficiently across the whole spectrum, meaning we could read more data and have different formats read by the same reader."

"Images are formed on a LCD screen using polarised light and in this case, circular polarised light, so the rolled-up design of the shrimps' eyes could lead to us designing much more efficient and better displays," he said.

"We want to use nature's technology the shrimp have evolved."

Scientists are currently puzzled as to what the shrimps use this intricate and complicated visual system for but they do have a theory.

"It's possibly all coming down to sex, which is often the case in the animal kingdom. They really want to know about each other and judge the quality of their mates," Professor Marshall said.

There's more at the link. (Also, Wikipedia has a lot more information about the mantis shrimp's eyes and what they imply.)

So 'it all comes down to sex' for the shrimp, does it? Funny . . . for a great many humans, that's why they watch DVD's! How appropriate that the former's 'technology' might help the latter!

Mmmm, an optical drive that tastes good with cocktail sauce!