Forty-three years ago, on October 21st, 1966, a school at Aberfan in Wales was overwhelmed by an avalanche of mud and water when a mining tip (a dump for mine waste) collapsed and slid down the mountainside into the village. 144 people died, 116 of them children. 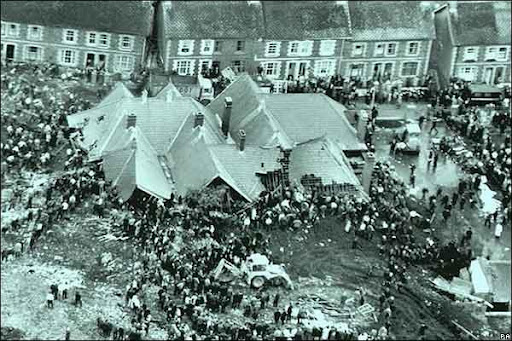 I was standing on the edge of the depression, sir, I was looking down into it, and what I saw I couldn’t believe my eyes. It was starting to come back up. It started to rise slowly at first, sir. I still did not believe it, I thought I was seeing things. Then it rose up after pretty fast, sir, at a tremendous speed. Then it sort of came up out of the depression and turned itself into a wave, that is the only way I can describe it, down towards the mountain … towards Aberfan village, sir. … And as it turned over, I shouted: "Good God, boys, come and look at this lot". … I was looking down in the crevice, sir, down at the drop, and it seemed to me like as if the bottom shot out. 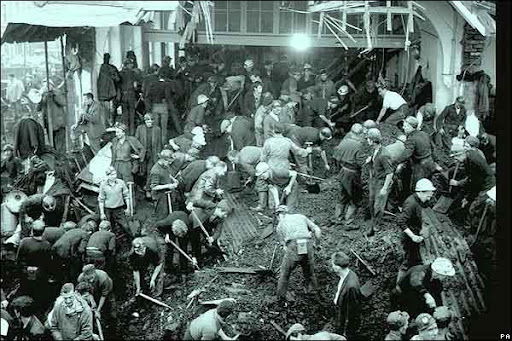 We were not in there more than five minutes when I heard a shout. … We all got out in a matter of seconds. … We all stood there, sir, on the front of the tip. … I saw the tip going in … all I can tell you is it was going down at a hell of a speed in waves. I myself ran down the side of No. 3 tip, all the way down towards No. 2 and No.1 tip on the side. As I was running down I heard another roar behind me and trees cracking and a tram passing me. I stopped – I fell down in fact. All I could see was waves of muck, slush and water. I still kept running … I kept going down shouting. I could not see, nobody could. … I was stumbling and I got stuck in a bit of the slurry. I could hear a rush behind me and all I could see was soaking wet slurry like waves coming down, more water than muck itself coming down.

… I never expected it would cross the embankment behind the village which I could not see because of the mist which covered the whole of the village. There was nothing I could do. We had no telephone to give an alarm or any warning device. I shouted, but it was no good.

I heard a noise, a big rumbling noise. … I saw a tree and a telegraph pole coming towards me first, then I saw a big black mass of stuff. … A black wave of muck.

As I was walking up the hill where it turns left, I saw a big wave of muck coming over the railway embankment. It was coming straight towards me and I ran. … I saw trams, trees, trucks, bricks and boulders in it. 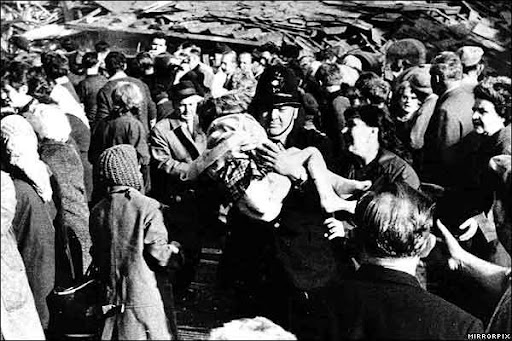 [It sounded] Like a jet plane. … and two or three seconds later I could hear stones and rubble, so I ran back down the hill. I thought it was the tip. … I said "I don’t think it is a jet, it is the tip", and I shouted at them [two boys] to run, and they ran down behind me. … I remember in Moy Road I could see the front windows crashing in, and the front doors; it was like a pile of dominoes coming down. 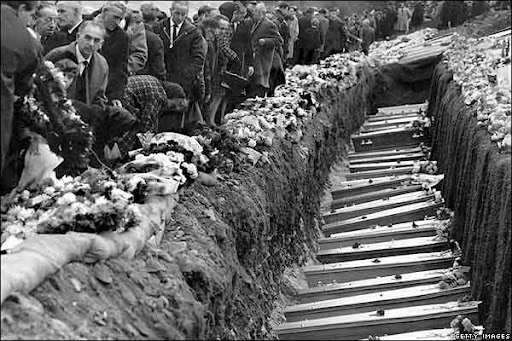 I went into that lane for shelter; I didn’t know what to do. … I had only got in about a yard and this top of the garage was down and a sheet of zinc came down and hit me on the head, hit me down. … I could not force it off me. There was a lot of bricks on it; it protected me. … [The noise] was suddenly cut off, just like the wireless being turned off. … It stopped as it hit the last house down No.1 Moy Road and there was a terrible silence. 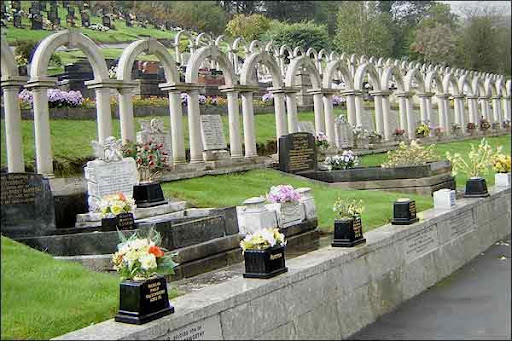 In that silence you couldn’t hear a bird or a child.

I remember this disaster for very personal reasons. My mother hugged me very tightly that afternoon at our home in South Africa, her eyes bright with tears. To my impatient eight-year-old query as to what was wrong, she told me that there'd been 'a tragedy' in Wales, and a lot of children my age had died. She didn't say any more, but she knew that part of Wales, having had friends from there during World War II. I reckon she was giving thanks to God in her own way that we weren't living there . . .

A subsequent official Inquiry laid the blame for the disaster squarely upon Britain's nationalized coal industry, although no criminal charges were ever brought against any individual. The Aberfan disaster was a pivotal incident giving impetus to the development of better workplace safety regulations and procedures.

May those who died, rest in peace. May their shattered survivors, many of whom never recovered from the tragedy, find rest with their advancing years, and be reunited with their loved ones in eternity.

Amen. Thanks for writing about this. I will keep those that lost thei lives and those that still live wtih that loss in prayer this week.

Thanks for blogging about Aberfan.

We visited there in the '80s and one of the survivors told us that even after the disaster the pain carried on as there were just no kids playing in the streets and Christmas parties were empty.