The reality of losing a child


There's a heartrending story on MSNBC about the death of a young child from cancer, and her parents' efforts to give her the best and most meaningful life they could during her dying, and their experience of her loss. It brought me to tears, and I think it may be very valuable in helping others to face such tragedies. Here's a brief series of excerpts to whet your appetite.

Elena Desserich was diagnosed with brain cancer at 5 years old. She began to hide hundreds of little notes around the house — in sock drawers, backpacks and tucked between the books on the shelves — for her parents, Brooke and Keith, to find after she was gone. In “Notes Left Behind,” her parents share the journal entries they kept during her battle, as well as content from the notes left by Elena. An excerpt.

From Part 1: The beginning Day 1—November 29

It began early. We called it “binner.” With her IV surgery scheduled for 7 a.m., the last time she could eat was 1 in the morning. So at midnight I woke her up to a breakfast/dinner of yogurt — except the nurse forgot to order yogurt before the kitchen closed and we ended up with a meal of pudding and applesauce instead. From 1 a.m. to dawn we talked about “Alice in Wonderland,” her new discovery of the TV remote and what she always wanted to do. And although I couldn’t always understand her words because of the tumor, I could usually understand her drawings.

First came a circle with squiggly lines. This was where she wanted to go — the only problem was that I did not know what she was telling me. After several tries and more than enough frustration on her part, I figured out that she was talking about the “little restaurant” — the chili parlor a mile from our house. With this her face lit up as she told me she wanted spaghetti and cheese. This was a remarkably simple request and we added it to the list. The next one was a bit harder: the Eiffel Tower. To this day, I still don’t know where she came up with this one. Regardless, this was the list and what we needed to accomplish. From there the list continued to the “street of dresses,” which I immediately recognized as a wedding dress district in our town, but I feigned ignorance. It was the same street I had deliberately driven down on the way home with the girls for the past five years, while telling them to pick out their dresses. Now she was asking me to take her to the same shops that I had always envisioned taking her to when she was engaged. Now I questioned if she would ever make it that far. Still, it went on the list.

As the night went on, we continued to talk. She wanted to talk and I wanted to listen. Sleep was not as important as it was three days ago. I watched her face illuminated by the lights on the heart monitor wondering if I would remember every detail: the softness of her cheeks, the dancing glow of her eyes, the innocence of her thoughts. But was it all a nightmare? Would I awake tomorrow and the tumor would simply be gone? Maybe this was just a lesson from life and by tomorrow the tumor would miraculously disappear. I could only hope.

That night, the doctors sent us home for rest, but after they told us that our daughter had only 135 days to live, sleep wasn’t in our plans. Still we smiled, wiped the tears from our eyes and tried to pretend that everything was all right. But it was Elena who had the best suggestion. Before leaving, she wanted to celebrate Christmas. So we took time to carefully find her precious Jesus and angel ornaments and hang them on the tree that the grandparents had hastily put up only minutes before. Ironic, because in previous years, I’d always insisted on not putting up the tree before December 15. Still, this year it couldn’t come soon enough.

Today was a good day. It was Saturday and we didn’t have to go to the hospital — all we had to do was make Elena smile. She was tired this morning, but also very hungry for waffles. After waking up at 6 a.m. from her open-eyed and teeth-gnawing sleep, all she wanted was waffles with butter. At first we couldn’t understand her with her limited voice, but thank goodness she could at least spell “WFL” to communicate her wishes. She had to have waffles with whipped cream, chocolate chips and cherries for eyes. And except for the cherries, she ate the entire thing. Must be the steroids working.

For the first time, Elena has now lost sensation in her thighs. Now she has a limp in her right leg, no gag reflex, limited ability in her right arm, loss of left-eye peripheral vision and reduced sensation in her legs. I know this because in an attempt to raise a smile, I tried to tickle her most ticklish part: her knees. It used to be that all I needed to do was motion toward her knees and I would instantaneously get a wide-mouth smile. Now she simply looks at me with annoyance. I miss tickling my little girl. For a dad, it’s always about more than horseplay — it’s a way of expressing my love. I’ll just have to find another way to make her smile.

With the tumor progressing, her speech is now very limited and you can see her actively counting the amount of times she chews her food so she doesn’t choke. I think she’s as much aware of her situation as we are. Her tongue and palate paralysis are also making it very difficult to understand her words. She’s getting visibly frustrated now and with her right hand almost completely immobilized, she has difficulty in helping convey her thoughts with hand motions. Brooke and I are now trying to teach her sign language in the event that she loses speech altogether, as well as her sight. Hopefully she will never have to use it, but we are painfully aware that this might be her only connection to the outside world. She already knows the alphabet A–E and knows the signs for “mother,” “father,” “thank you,” “tree,” “thirsty,” “hungry” and “proud.” We use the sign for “proud” the most throughout the day. Brooke is teaching her the sign for “bulls--t” so at least she can curse when she gets frustrated. I don’t think “shucks” has a sign. I keep telling her that as long as she keeps trying to tell us things, we’ll keep working to understand; that way we’ll never give up talking.

There's much more at the link. Also, examples of the notes Elena hid for her parents to find may be seen here. Both sites are highly recommended reading.

Elena's parents, Brooke and Keith Desserich, have written a book, 'Notes Left Behind', about their daughter, her struggle, and the notes she left for them to find after her death. 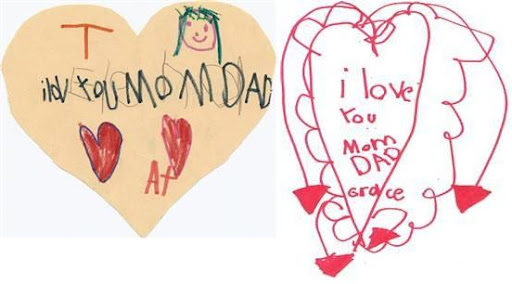 It's on my 'To Buy' list, you may be sure of that! Here's a video clip where they talk about the book, and about Elena's life.

Sometimes the worst happens, even to the best of people. That's life. God never promised us a life of beer and skittles - He merely promised us grace to cope with whatever came along. Elena's story is a reminder that anyone's time may come at any moment, and also a salutary lesson to us to live for today, and be grateful for all we have. We may not have it - or them - for much longer. That's life, too.

I can empathise with these parents. I lost my first daughter minutes after her birth. The pregnancy had been completely "normal" and without complications. In the end, the birthing process got complicated and the emergency cesaerian came to late. I have only heard one whimpering cry from my daughter through the door of the operating room. But I was not able to see or hold my daughter in life.

In retrospect: the best thing I did for my grieving process, was to insist on carrying her casket on my own arms to her grave, and also personally lowering it into the grave. Covering that little casket with earth has been one of the most difficult tasks I have ever done. But it has helped me tremendously in the years to come to obtain closure for the grief and pain.

Looking back, I must say that God used that experience to start preparing me for my life mission. 20 months later I adopted a little girl who was stranded in the local court system. Two and a half years after the death of my first daughter I held another baby girl on my arms.

Today I am a single father of two wonderful girls, and preparing to become a family lawyer in my country with the goal to help children of broken families.

He merely promised us grace to cope with whatever came along.

Probably the best way I've ever heard it said. Thank you.