A sad memorial to a murdered people


I was profoundly moved to read this report in the New York Times.

A team of archaeologists and mapmakers say they have uncovered a forgotten tunnel that 80 Jews dug largely by hand as they tried to escape from a Nazi extermination site in Lithuania about 70 years ago.

From 1941 until 1944, tens of thousands of Jews from the nearby city of Vilnius, known as the Jerusalem of Lithuania, were brought to Ponar and shot at close range. Their bodies were dumped into the pits and buried.

“I call Ponar ground zero for the Holocaust,” Dr. Freund said. “For the first time we have systematic murder being done by the Nazis and their assistants.” According to Dr. Freund, the events at the site took place about six months before the Nazis started using gas chambers elsewhere for their extermination plans.

An estimated 100,000 people, including 70,000 Jews, died at Ponar. Over four years, about 150 Lithuanian collaborators killed the prisoners — usually in groups of about 10. In 1943 when it became clear the Soviets were going to take over Lithuania, the Nazis began to cover up the evidence of the mass killings. They forced a group of 80 Jews to exhume the bodies, burn them and bury the ashes. At the time they were called the Leichenkommando, or “corpse unit,” but in the years that followed they were known as the Burning Brigade.

For months, the Jewish prisoners dug up and burned bodies. One account tells of a man who identified his wife and two sisters among the corpses. The group knew that once their job was finished, they, too, would be executed, so they developed an escape plan.

About half of the group spent 76 days digging a tunnel in their holding pit by hand and with spoons they found among the bodies. On April 15, 1944 — the last night of Passover when they knew the night would be darkest — the brigade crawled through the two-foot-square tunnel entrance and through to the forest.

The noise alerted the guards, who pursued the prisoners with guns and dogs. Of the 80, 12 managed to escape; 11 of them survived the war and went on to tell their stories, according to the researchers.

Dr. Freund and his team used the information from survivors’ accounts to search for the tunnel.


There's more at the link.  It's well worth reading in full.

The work of the Sonderkommandos (of which the Leichenkommandos were part) was particularly sickening for those forced to take part.  All of them were concentration camp inmates themselves.  (A few photographs of their work survive, including the one below.) 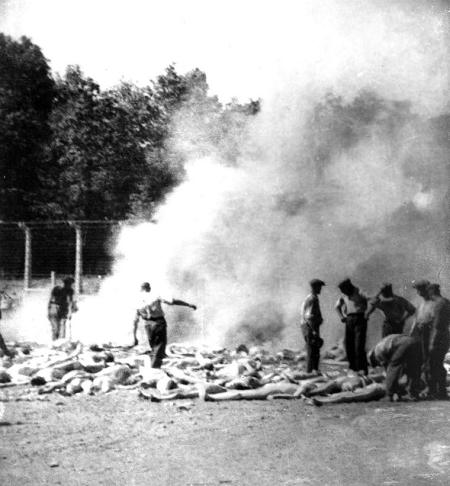 You can read more here about the various Kommandos (work teams) in which Jewish and other concentration camp inmates were forced to serve.  It's a sickening record.

I can only say, God bless the members of the Lithuanian Leichenkommando for their determination to escape and tell the world of the atrocity they had witnessed.  Less than 14% of them survived . . . but their success meant that the evil that was done in that country could not be concealed or covered up.  It joins the abominable record of man's inhumanity to man down the ages.

What makes me shake my head in depressed disbelief is that precisely the same inhumanity is at work today in the Middle East, but the world seems disinclined to do anything realistic to stop it.  ISIS/ISIL is as brutal, genocidal and xenophobic as the Nazis ever were, if not more so.  It's a pity the world's often-expressed determination to ensure that the Holocaust never happened again has not been sufficient to motivate more action to protect the victims of the Nazis' latest successors.

It is vital, completely vital, to the Liberal Intellectual Radical Progressive narrative that the holocaust remain an isolated instance of RIGHT WING barbarity, sometimes dimly echoed by RIGHT WING dictatorships. To acknowledge that mass murder is practiced by revolutionaries and extremists in all times and places would invite closer scrutiny of certain crucial aspects of The Narrative. Such as; were the Nazis Right Wing? What the hell was Stalin doing at about the same time? Or, horror of horrors, How many of the LIRPs pet revolutionaries and Social Justice Warrior have been totally psychotic murdering thugs?

The LIRPs have spent entirely too much time playing Radical Chic games with various murderous Islamic swine to be at all happy about going after ISIS.

Please don’t identify the Jewish Leichenkommando inmates as “Lithuanian” the way you did in your penultimate paragraph. Given the number of Lithuanian collaborators and their viciousness in murdering Jews (mentioned in the Times excerpt you quoted) it grates horribly. Call them Jewish, Jewish Lithuanian, Lithuanian Jewish—but not “Lithuanian”, not in this context.

Holocaust denial is growing nonetheless, not only in the Nazi parts of the Internet like Stormfront, but also in the so-called "alt-right" in places like Unz Review. You might say that holocaust denial is just part of a broader reality-denial movement: the attacks of 9/11 were a false flag, mass killings in San Bernardino and Orlando were a false flag, Islamic State attacks in Paris and Brussels were false flags, and on and on.

Arguing with the reality deniers is pointless, they play a game called "Heads you lose, tails I win". No matter how many of their demands for evidence you meet, they always come up with more, an infinite regress.

I believe in free speech and that the government must not censor free expression of ideas, but a privately run website is free to decide who can use their corner of the web as a platform ... and who cannot.

anti-Semitism has been on the rise again in Europe, like it's something in the water...As for the phrase, "NEVER AGAIN!", there are damn few non-Jews who mean it, if it means trouble for them, as in the 30's. Those who say it seriously, are the Isreal officer Academy grads who take the Oath at Masada each year. And this older American Jew,(Roman Catholic division), of German extraction, who owns a 1940 marked K-98k rebarreled to 7.62 NATO, the Swastika obliterated with a punch, and the barrel markings in Hebrew.... stripper clips work fine.