When you don't care about international reaction . . .


. . . sometimes you can get away with murder.  Almost literally.  The Telegraph reports that Russia has been caught using incendiary weapons against civilian targets in Syria.

Russia has been caught using incendiary weapons in Syria by its own TV channel Russia Today, which later tried to edit the footage out of its broadcast.

The Kremlin has previously denied that its warplanes were carrying these bombs, which are restricted by an international convention.

The English-language news station, which is funded by Moscow, broadcast footage of Sergei Shoigu, the defence minister, visiting Hmeymim airbase in the Syrian province of Latakia last Saturday.

A pilot can be seen next to a plane loaded with munitions marked with identifying numbers. 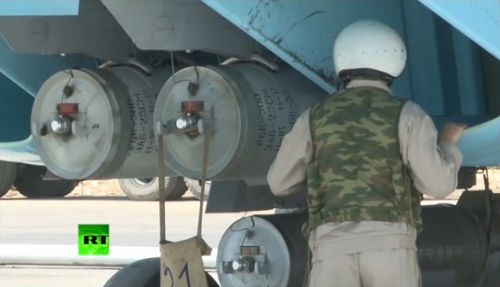 They said they believed the weapons contained a metal powder fuel known as thermite that ignites while falling, which has led witnesses of attacks to describe them as “fireballs.” It is the hottest burning man-made substance in the world.

The use of thermite has been reported in civilian areas of Aleppo in northern Syria, where Russia has been conducting regular air strikes in support of President Bashar al-Assad in anticipation of a ground assault to retake the city from rebel groups.

A day after the RT broadcast, a residential neighbourhood in Hayan was hit by what appeared to be a “fireball” explosion.

“It looked like a bright shower raining down,” an activist in Aleppo told the Telegraph, which was backed up by a video recording.

“It happened at night and the whole sky lit up. The buildings were burning for many hours after.”

The use of air-dropped incendiary bombs on civilian populations would be a violation of the Convention on Certain Conventional Weapons, of which Russia is a signatory.

I've been in the (too) close vicinity of one of those things when its contents landed.  They're not fun . . . and that's putting it very mildly.

Pretty sure at least some of those ISIS bastards have it coming.

Russia still knows how to fight a war and try to win at it.
America gave it up during Korea and Nam.
We need to get back to the mind set of WWII to get an unconditionally surrender from islam, period.
It will be one of the way of totally stopping them from contaminating the rest of the human race and the Universe.
Plus a few nuclear weapons dropped in a few key islam places would not hurt either.
Heltau

@Heltau: If you could guarantee to hit only the guilty parties, sure. What about the innocents among whom they hide themselves?

You beat me to the response to Anon...

Heltau has a good point about not winning a war. Those two are the primary examples. Our military's reaction was to realize the key was to severely restrict the news media's access to any areas of battle. Unfortunately, the Democrats are not only good at losing wars, they are past masters at losing the peace, in areas that they were unable to engineer a conflict loss.

As a side note, I think our military overlooked a critical function, which would be to instruct their service members in the reality of conflicts, and why the idiocy of the Left encourages more wars to occur. This, of course, endangers all service members, and to continue to vote for Democrats is counterproductive to them and their families for generations. Now, it's too late for this type of action, since Obama has chased so many of the competent ones out of the services.

The US isn't much for killing meat shields, it's hard on our military. We try for precision targeting instead. Russians are much more pragmatic. They're also known for treating agreements as non-binding, but our elites have been making big strides in that area.

So? Civvies are killed. Happens in every war and even more so that these folks in the desert have absolutely zero regard for human life. At least someone, the Russians, are doing something instead of copying our legendary leader (legend in his own mind) Obama, and not calling the enemy what it is...the damn enemy. They are doing what we should have done from the beginning in Iraq and Aphganistan. Would have saved a lot of lives if we just would have stopped being politically correct idiots and stayed warriors.

Kinda reminds me of Carrera (the Tom Kratman character). I wonder what Mr. Kratman's opinion on this particular case would be. I don't *like* it, (indeed, I hate it!) but I don't know enough to say that they unquestionably, inarguably made the wrong, most evil choice...y'know? My knee-jerk reaction is to condemn them as murderous monsters...but I'm pretty sure it's more complicated than that. *unhappy sigh* either way, I'm definitely going to be praying for the innocents who may/will suffer as a consequence of these tactics. God help them...and us.

Lots of genocidal maniacs in this comment section it seems.

I doesn't look terrible effective dropping them on stone and cement structures.

@Anonymous 4:26pm - I've seen videos of Thermite cutting through heavy iron and steel more than a foot thick in a bright, fiery rendition of a volcano. I'm fairly certain stone and cement (even with steel rebar) wouldn't hold up to the heat. And even if it did, the corresponding heat transfer to the air and solid material would probably bake everything inside the more narrow spaces.