The Telegraph highlights a very interesting piece of research.

Detailed analysis of real-world cash returns versus shares over the past 21 years has shown bank accounts left savers better off than stock markets in most scenarios, leaving investors to ask, “have we had it wrong all these years?”

The work by Paul Lewis, financial commentator and long-time host of the BBC Radio Four programme Moneybox, contradicts much of the received wisdom of financial professionals, as well as various respected studies into long-term returns from different asset classes.

His research is unique because it uses returns taken from actual savings accounts and investments available to savers, rather than theoretical figures that don’t take account of charges and market-leading rates that influence returns.

Mr Lewis found that in 109 of the 192 scenarios, 57pc, cash won. What’s more, in 46 scenarios, or 24pc, an equity investor would have lost money, something that can’t happen to cash savers as long as they keep within the limits of deposit protected accounts. 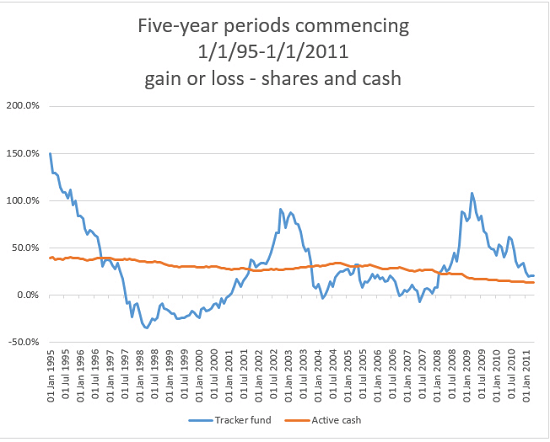 This result does not mean, however, that over the entire 21-year period you would have been better off in cash. The annual compounded return from shares was 6pc, versus 5pc for cash accounts.

This is because the gains in the scenarios when shares won were greater than those when cash won.

Even here, though, the return from shares seems unimpressive given the extra risk taken versus cash.

The confusing picture defies much of the conventional thinking around investing, which has generally been that shares will give better returns the longer you hold them, and that they will easily beat cash in the vast majority of cases if held for more than about five years.

Mr Lewis’s work suggests that, in fact, this only applies over time periods far longer than previously assumed, more like 18 years, and that for holdings periods shorter than that, the results are very mixed with cash generally ahead.


There's more at the link, and at the original article.

That's certainly thought-provoking.  I'm not holding any stocks or bonds in accounts I control at present - I went to all-cash holdings a couple of years ago, because of the volatility in the stock market and the uncertainty over the future of the bond market.  I've also diversified into precious metals, although being a very small investor, my holdings aren't worth much at all.  Nevertheless, I think this reinforces my skepticism over stocks and bonds under present conditions.  I think that, unless one's investing for twenty to thirty years or more (something I'm now too old to do with any confidence), they remain at best an uncertain bet.

right now there seems to be no advantage to a bank deposit VS under the mattress, except a house thief can get the cash under the bed and it takes a government to steal the bank account.

Something I have been curious about for a long time, and never seen analyzed, is the relationship between inflation and capital gains taxation. On short term holdings, stocks, etc, the effect may be minimal-
But- say forty years ago someone bought a home in some good location for 80,000. Now it is worth 600,000. So the sale is taxed at 520,000 bucks, even though inflation accounted for about half of that gain. Essentially,they are taxed on the destruction of their own buying power.

So, very long terms seem to favour stocks and bonds, but then so can very short terms - not necessarily "day trader" activity, but on the order of weeks.

Buying near the bottom of the market, and selling near the top can nett HUGE returns - naturally with increased risks.

Successfully doing so too often may attract allegations of insider trading from corporate watchdogs, but if you change your name to Clinton, Buffet, or Soros first it shouldn't be a problem.

PS Interesting that the comment system knows how to spell Clinton and Buffet, but Soros is flagged as an error.

Second, cash there does not mean what cash means here. They are referring to one year bonds. Nobody in America thinks bonds when they hear the word cash. This article represents the difference in England of investing in stocks vs investing in bonds. It has nothing to do with investing in money markets or CDs which have virtually zero rate of return currently, actually a negative rate of return when factored for inflation.

Thirdly, it is not clear at all from the article how taxes are factored into adjustments on earnings. Since tax rates and tax treatment of investment income are radically different in the two countries, this is another major error point between investors in England and investors in the United States using this article as investment information.

Additionally, they assume that all bonds are purchased and held to term, which is a fairly uncommon outcome. In the US, most bond investments are made through bond funds, which increases the volitality and decreases the return. Bond returns go to zero, in most cases, if the bonds are redeemed even one day early.

I suspect that the same calculations run for the United States investment market and the investments available to American savers (i.e., everyone who has a 401(k), 403(b) or IRA) would show a much greater difference in return. In short, bonds have supposedly less beta, or variability, then stocks. But their return is dramatically lower than stocks.

In short, this article probably does not mean what you think it means.

Gold in 2016 is selling at about $1,200/oz, which represents an annualized rate of return of about 5.4% if purchased in 1995 for $400. That same money invested in any of several HUNDRED different growth stock mutual funds available through any broker or online would today be worth about $2,500 or so.

Gold is not an investment. It is a hedge against total financial system collapse. Gold seldom looses all of its purchasing power except when the government decides that it is illegal for private citizens to own it, which happens repeatedly throughout history and around the world. It is an especially common tactic when government financial systems collapse, which is when you need it. That kind of reduces its utility as a headge though doesn't it?