Guys, you may find this useful in the heat of summer


I have to give a shout-out to a product I've found extremely valuable in the very hot summer temperatures we're currently enduring in north Texas.  It's a little embarrassing to talk about, but since I know it's a widespread issue, I thought I'd take the plunge.

Lawdog tells me that it's not unknown in this area to endure up to three months or more in summer with daytime heat in the 100°F (38°C) range.  For the first time in my life, I'm being troubled by 'jock itch' after sweating a lot when working outdoors (pushing a mower to cut the lawn becomes a real chore in heat like that).  I found that normal cornstarch powder doesn't do anything to help.  In fact, on further research, I learned that it's actually counterproductive for such problems, because yeasty beasties like tinea cruris (or tinea pedis, commonly known as athlete's foot, for that matter) thrive on cornstarch - it actually feeds them.  Something better is needed.

After much looking around, I came across Zeasorb antifungal powder.  It's marketed in two versions, one for athlete's foot and one for jock itch, but they're medically identical, with the same active ingredient in the same concentration (see the labels below).  They're just differently labeled to go in different sections of a pharmacy's shelves.  It doesn't matter which version you buy.  Also, neither version contains cornstarch, which means they won't aggravate your problem rather than cure it. 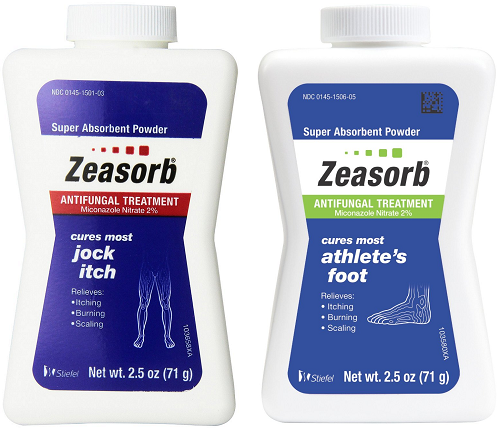 I've found that on Amazon.com, buying individual bottles of the athlete's foot version is currently the cheapest option, at $6.17 apiece.  Multiple-bottle 'package deals' actually work out more expensive per bottle.  I now use this stuff regularly, and it makes a big difference.  Highly recommended, if you're having this problem - and I daresay it'll do just as well for athlete's foot, too.  My doctor told me that if the powder alone doesn't work, a prescription antifungal medication used in conjunction with the powder should solve the problem;  but so far, I haven't needed that.  Frequent showering, followed by application of this powder, is doing the trick.

(I'm not being paid or given any other consideration to promote this stuff.  I'm just glad it works for me, and I hope it does for you, too.  Jock itch is no fun at all!)

I've been using Zeasorb foot powder in the same way (as well as on my feet) for a couple of years now, when temperatures get into the 80s.
It keeps the fungus from gaining a foothold (so to speak), which is much better than waiting until the fungus puts in an appearance and then having to break out the bleach.

Lotrimin works well and is available at Walmart. Almost any anti-fungal powder will work as a prophylactic. Zeasorb, which I've never used, may have some qualities that allow it to work better, however.

This is one of those problem areas we all have but never talk about, so I appreciate that you brought it out in the open as well as the specific recommendation. I've been using Gold Bond Body Powder for the past couple years successfully, but I'll check Zeasorb out. Thank you.

@Quartermaster: Lotrimin powder contains cornstarch, so it's actually feeding the fungus. Not a good idea.

@Anonymous at 7:51 AM: Gold Bond powder contains talc, not cornstarch, so it doesn't feed fungus. I've never used it, but that's a good start. However, it's not medicated, AFAIK. I think you'll find Zeasorb does a good job.

A couple of suggestions here, one is get away from synthetic fibers for your skivvies and socks(cotton is still king) and the other is think about going "commando-style", heh, heh, especially when doing yard work. fresh-air movement is your friend in these cases. Commando-style was something that was re-discovered by the troops in Viet-Nam. Anything that holds moisture against your skin is NOT your friend.

When I was soldiering in hot, steamy, humid regions, Gold Bond Medicated powder was my go-to jock itch medicine. After several days without a shower, the rotten-crotch fungus was legendary.

Some said that the cure was worse than the disease, but after the initial tingling, burning sensation, the coolness set in, and you were cured. Your stuff may work great too, but Gold Bond was my savior on more than one occasion.

In the Ukraine they go for the more simple types of things that are not brand names and the pharmacies there recommended Clotrimazole and Boric Acid powder for a variety of things. I can't say about the USA brands that are mentioned here that I am not familiar with. They might be just as good.

Also, one might consider a kilt. For yard work and such in summer. I used to wear them year round, but gained some weight and haven't replaced them.

I've switched almost entirely to modern "hi tech" fibers for shirts and underwear. I've been wearing wool socks exclusively for almost 2 decades. If I know I'm going to be out away from home and sweating in my shorts more than usual, then the sports underwear with its wicking property and movement control is def called for. If cutting the grass, baggy cargo shorts in hi tech fiber (or summer weight ripstop) commando style.

It took only a little while to see the benefit of wool socks. No more heavy callus. No more white pasty soft skin on the edges of my feet. No more stink for that matter. Lots of sources for lightweight wool socks, REI being a good one with lots of choices.

I didn't really believe the "clima cool" or "heat gear" clothes would work, or make a difference but they really do. If you can buy them on sale, they are totally worth it.


Kilts and weed-eating - I'm not sure that is a good combination....

There's no difference in content, but the one labelled for jock itch costs several dollars more. That seems to be universal for all the OTC antifungal products. I call it the "crotch premium".

I have been using it for years for combating nasty underarm yeast infections.
Turns out I have an allergy to active yeast cultures, and had to switch to an anti-perspirant spray in the morning and Zeasorb dusting at night. Works like a champ, just wish I could go back to my organic deodorant, as I am not a fan of the chemicals used in the spray. Oh, and no beer\ale for me! I also live in North Texas... I understand your pain!

The other thing that helped Hubby was a fan after his shower. Making sure all the important bits and creases were absolutely dry. Yes, it looks odd but worked really well.

I can't wear wool due to an allergy, but socks made from acrylic yarns seem to wick very well. This reminds me, I need to order more high-tech undies from LAPG.

Why are you cutting the grass when it is 95+? Do about 8 AM before it gets hot.

I've had good luck with Gold Bond. It advertises as "medicated," but that seems to refer only to menthol; it doesn't look to have any other active ingredients (at least not the yellow bottle; I don't have the others to look at). It comes in three strengths: yellow (mild), green (medium), and blue ("just plain nuclear nut-melting junk," I've heard it called). Yellow has worked just fine for me for a couple of years now.

BTW,
these were the shorts I was referring to:

they are in the Closeout section. No obvious reason for that. Lots of possible reasons, but the first one I got seems fine. Just ordered a bunch more. Price is reasonable, considering normal retail for such items. They are polyester, which I can rarely tolerate against my skin, but these are great, especially considering where they are worn!

They have an anti-microbial coating, which is silver based, IIRC.

You can find some good deals in their closeout and other similar depts. Read the reviews before ordering anything, of course.

The fact that Lotrimin is death on fungi means there won't be anything to feed on the starch. I've never had a case get worse when I used it.

In re: stinky feet

Nothing against woll socks, mind, but the easiest way to not have stinky feet is to not wear the same shoes every day. It's also more economical. Three pair of shoes worn in rotation will last as long as five pair bought and replaced one at a time.

Don't put your stuff away wet! While you are holding that hair dryer in you hand, use it on your feet between and under your toes, and your other damp bits.

Or air dry wearing a dry towel or robe.

The hairdryer is quick, and becomes second nature, followed with a quick dusting of Gold Bond for any residual moisture.

The key is 'get that stuff dry' before confining it in a pair of shorts (or socks).

Peter,
I've had to revise my enthusiasm for those hi-tech shorts. 4 of 10 were made wrong, and the waistband could be used as a tow strap for bicycles, which aggravates the problem. I left a full review on the website. Sigh...